Inside Scottie Scheffler’s golf bag: 7 things I noticed while inspecting his clubs 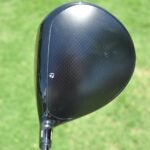 Scheffler said the overlook look of TaylorMade's Stealth Plus driver, in the address position, played a role in his decision to switch.

When filing “What’s in the bag” stories in the past, I’ve typically relied on my gear knowledge to tell me what’s going on with a particular club build. But if you can get the intel directly from the man who’s swinging the club — even better.

During a recent trip to Royal Oaks Country Club in Dallas, Texas, I had the opportunity to have the reigning Masters champion walk me through his entire setup. As usual, a few items stood out to this gearhead.

Here’s a look at seven that are worthy of your attention.

Prior to inking a deal with TaylorMade earlier this year at the Players Championship, Scheffler had what I considered to be the ultimate bag setup. The smart mix of equipment brands led me to believe he had to be a closet gearhead.

During our chat, I put the 25-year-old on the spot: Did he have an affinity for gear?

“I definitely will test stuff — I don’t love doing it at a tournament — so if anybody wants me to test, I’ll happily do it at home,” Scheffler said. “I want to use the best stuff. That’s why I was a free agent for so long — I liked certain club companies and what they did. But I like new gear. Gotta try and get better, and new gear helps.”

That’s Scheffler’s way of saying he enjoys testing new gear, but he’s not banging down the door to be the first to get it. On the gearhead scale, I’d say Scheffler is a solid 6. He knows what’s out there and takes the time to see if it works with his game. However, he certainly isn’t trying every available option on the market.

As many of you probably know, I’m a big lead tape guy. The tape has been around for decades and has since been replaced by adjustable weights — but that doesn’t mean it’s irrelevant in the professional ranks. Plenty of players still use it to achieve a certain feel or produce an ideal flight — we’re looking at your, Tiger — including Scheffler.

We constantly get asked where lead tape should be placed on the club (and how much) to achieve the desired result. I’ll be the first to tell you no one has the perfect answer. Depending on your delivery and feel preferences, you might need more strips than the next guy. Trial and error is part of the lead tape journey.

Even Scottie fiddles with lead tape. Affixed to the back of his Srixon U85 utility irons were a few strategically-placed strips of lead tape. What I found interesting was he actually places the tape himself and then tests the club out to see if checks all the boxes.

“The [3-iron] is different because [the lead tape] is more on the heel,” Scheffler said. “But that’s just a trial and error thing. On the 4-iron, I was struggling with that club for the last year and we actually added that lead tape in the bag room [at Royal Oaks], not in the Tour truck. We do stuff here all the time and use a ton of lead tape.”

Don’t assume Tour pros have all the answers. Sometimes they’re searching in the dark just like us.

During a recent interview with Scheffler on GOLF’s Fully Equipped podcast, we learned a noticeable uptick in ball speed played a role in his decision to change drivers earlier this year. There’s no denying TaylorMade’s Stealth can move the ball. But when I asked Scottie to take a deeper dive into his driver testing process during our most recent chat, he mentioned the driver passed a critical test that had nothing to do with speed.

That would be the eye test. In other words, if the club doesn’t look right to Scheffler’s eye, it won’t even make the initial cut.

“This driver, to me, looked better than their older heads did,” Scheffler said. “There was more going on with the top of the driver with the older one — like different colors — and it sometimes looked open to me. When I set [the Stealth] down, it looks really square.”

Some golfers are willing to let certain visuals slide if the club is performing, but Scheffler isn’t one of them.

If you missed the story on GOLF.com, Scheffler revealed a round with Tiger Woods at the 2020 Masters convinced him to test out the TaylorMade P7TW irons currently in his bag. A tour pro with a set of blades is akin to wearing red, white and blue on the Fourth of July. It just feels right.

Scheffler has played blades for most of his career but admitted he’s aware of the trend towards irons with bigger profiles, particularly at the top of the set. It’s why he plays a very forgiving utility iron in the 3 and 4.

“I’ve been seeing more guys with the bigger, fatter irons, as I do in my 4-iron,” Scheffler said. “It just so happens that I play a little differently than a lot of guys do. That’s probably why I don’t change clubs that often either.”

In Scheffler’s eyes, it’s possible for clubs of all sizes to coexist in his bag.

Looking strictly at the numbers stamped on his wedges, Scheffler has a sizable loft gap between his 50-degree gap wedge and 56-degree sand wedge.

“The 50 is actually bent to 51 and the 56 as well for gapping purposes,” he said. “I don’t even know the exact number, but they go the right distances that I like.”

But there’s more going on with the two wedges than simply manipulating loft to achieve the desired gaps. As I also learned, it’s not uncommon for him to keep the 50 and 56 in the bag for more than a year, in an effort to manage spin. Unlike the lob wedge, a club he usually changes out “every one or two months” to maintain a consistent level of greenside spin, Scheffler doesn’t need the same amount of zip in the gap and sand wedge.

Scheffler’s school of thought falls in line with another major winner — Justin Thomas. While the sand and lob wedge are replaced frequently, Thomas’ 46- and 52-degree will sometimes stay in the bag for upwards of two years before he contemplates making a change. Spin remains a vital piece of the equation, but having fresh grooves isn’t nearly as important.

The winner of the Masters has donated a club to Augusta National from their tournament setup since the event was first played in 1934. It’s a tradition that doesn’t get near the fanfare it deserves. Some players send the actual club from their setup, while others send a backup or replica if the club they want to donate is a bag mainstay.

Augusta won’t have to wait too long to receive Scheffler’s club donation — a 60-degree Vokey K-Grind lob wedge with grooves that, according to Scheffler, are “getting tired.”

“The [lob wedge] is a good one to send [to Augusta National],” Scheffler said. “Because if I keep it at home, I might lose it. And this one has done some really good work for me. I’ll send it there and it’ll be around for a long time.”

Scheffler used the club for an improbable chip-in on the 3rd hole during the final round and even gave it a shoutout in his post-round press conference.

Scheffler’s torrid stretch that culminated with a win at the Masters can be tied to a piece gear that changed the week he secured his first PGA Tour title in Phoenix. On the heels of his decision to change drivers in January, Scheffler swapped out his usual Scotty Cameron putter for a Special Select Timeless TourType GSS.

In Scheffler’s eyes, the previous wand wasn’t making enough putts, which prompted a trip to Cameron’s studio over the winter to locate something that provided a slightly different look at address.

“I’ve done a lot of work with the guys in the [Scotty Cameron] studio in California on my stroke,” Scheffler said. “When I went there during the winter, I knew I’d been doing this for a few years with the old putter and hadn’t seen as much improvement as I’d hope to.

“What I’d thought was I’d gotten into a habit of setting up to the putter. As I said earlier, you kind of play to the club. For me, I thought a slightly different setup would help me so I didn’t set up the same. It’s just a little different look.”

According to Scheffler, he wasn’t looking for a wildly different shape — just something that helped him feel connected to the putter.

“The one I had before had a wider topline,” he said. “This one is a lot smaller and when I set it up, I had a really good connection to where I was lining up the putter. [Caddie] Ted Scott and I thought it looked like how a putter should set up for us. We gravitated to this one really easily. The results have been pretty good since.”