‘My worst nightmare’: How a robot’s iconic hole-in-one almost ended in disaster 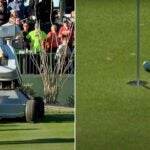 On this week's episode of Fully Equipped, Gene Parente recounts how his robot made a hole-in-one at the WM Phoenix Open.

If you’re a golf fan on social media, you’ve almost certainly seen the video of LDRICK the robot making a hole-in-one at TPC Scottsdale’s iconic 16th hole. Perhaps the only shot more iconic on the 160-yard par-3 came courtesy of another Eldrick (see: Woods, Tiger) which produced one of the loudest roars of his roar-filled career.

But as epic as LDRICK’s hole-in-one was — the robot, not the human — the shot very nearly had a drastically different result.

As Gene Parente, President of Golf Laboratories and owner of LDRICK, explained on this week’s episode of Fully Equipped, he’d originally programmed the robot for a 163-yard shot. However, when he arrived on the tee on the day of the exhibition, he discovered the shot was actually 143 yards.

“I’m freaking out,” Parente said. “They screwed it up. We had a club dialed in that was 20 yards longer.”

With the exhibition fast approaching, Parente hustled back to the range to grab a club more suited to the shorter distance. But with time working against him, he didn’t have time to dial in the machine to the proper distance before it was show time.

“I’m like, ‘Oh my god, this is my chance and I’m going to blow it because I have the wrong club,'” he said. “I’m just scrambling. My entire world has become just tunnel vision … I’m doing this on the fly and I have no idea how I’m going to do this.”

After a few trial-and-error shots, Parente still couldn’t quite get LDRICK to hit the ball near the flag from the shorter tee box. So just before the robot hit the now-iconic shot, he made a couple key adjustments.

“I put the ball high on the face because I was still long,” Parente said. “And I leaned the tee towards the toe, because I knew if I hit the ball off the toe it caused the ball to go to the right and I was still to the left. I didn’t even have time to adjust the machine.”

You know by now what happens next. LDRICK swiped at the ball and sent it on a direct course with the flag, took a couple hops and rolled into the dead center of the hole.

“I was watching the ball fly, and there was a lip on the green,” Parente said. “There was a sand trap, and it hit on that lip, and if it hit two inches lower, the ball was in the trap. But it hit right at the perfect angle, popped up and rolled 30 feet in. Sometimes it’s better to be lucky than good.

“All of the sudden, beer cans are raining all over the place. All hell broke loose. It’s a fun memory to relive every year.”

Check out the entire episode of Fully Equipped below.