This Tiger Woods Scotty Cameron putter could be worth $1 million 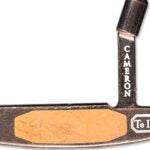 Two months after Golden Age Golf Auctions sold a Tiger Woods Scotty Cameron backup putter traced to the 2000 season for an astounding $393,300, a fractional sports investing platform has its sights set on cracking the $1 million mark with another Woods-used wand.

Recent Tiger putters sold at auction have ties that can be traced back to the famed Newport 2 GSS he used to win 14 of his 15 major titles. The putter currently available on Collectable, however, is connected to an iconic Anser-style model that started the Scotty Cameron craze in 1997, when Woods set countless Masters records en route to a historic 12-shot win.

The Newport TeI3 Teryllium he wielded that year at Augusta remains the only other putter Woods used to win a major title. As Woods confirmed in 2016, it’s one of two putters that have a prominent place in his putting studio.

What few gearheads probably realize is that Woods employed more than one TeI3 putter during the late ’90s. According to Collectable, the putter on their site is photo-matched to the 1998 U.S. Open at Olympic Club and BellSouth Classic, making it a Tiger-used putter. Woods would also go on to win the BellSouth with the putter for his 7th Tour title.

You read that right: Not only was the putter used in a major, but during one of Woods’ 82 Tour wins as well — thereby making it one of the most historically significant putters to ever hit the market. According to Golden Age Golf Auctions founder Ryan Carey, the putter has a chance to be the first million-dollar golf piece.

“The golf collecting industry is scorching hot,” said Carey. “We are seeing a massive uptick in demand — and that is long overdue.”

Before the putter ended up on Collectable, it was owned by NFL Hall of Fame wide receiver and Buffalo Bills great Andre Reed, who was gifted the putter by Woods himself during one of their rounds at Isleworth. (Woods and Reed were neighbors and played golf regularly.)

Judging by the rust and extreme wear to the head and shaft — notice the dent in the steel — the putter was used extensively over the years. The head features Woods initials stamped on the toe and a well-worn cord grip, along with a letter from Reed — the putter was first auctioned off in 2017 — and Scotty Cameron certificate of authenticity that verifies it was made for the 15-time major winner.

Most of Woods’ putters have sold for figures only a select few could stomach, but in this case, the average golfer can own a piece of this particular putter. Instead of simply auctioning the putter to the highest biddest, users can buy shares of the putter — it was trading at $31 when this story was published — on the Collectable platform. Fractional ownership doesn’t give you chance to spend a week with the putter simply because you own 10 shares, but it’s probably the closest any of us will ever get to owning a piece of golf history.