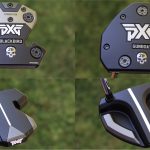 Since every golfer has a slightly different preference and stroke style, it’s important for putter manufacturers to provide options. More choices of head shape and hosel type increase the likelihood that each golfer can find exactly what they want and need.

PXG’s new family of Battle Ready putters continues to expand so that golfers have more options.

The Battle Ready putters are unique because of their modern head shapes and dual-material constructions (aluminum and tungsten) that work to achieve greater forgiveness. They also have patented Pyramid Face Patterns that use variable-sized grooves across their surface to enhance consistency on putts hit off-center.

The first release in the lineup was back in October 2020 when PXG launched the Blackjack mallet head. Since then, the company has released multiple putters, including mallets (Bat Attack and One & Done) and blade-styles (Brandon, Spitfire, Closer and Mustang).

On Thursday, the company announced the release of two additional mallet heads — called the “Blackbird” and the “Gunboat” — that are made for big forgiveness.

The Blackbird, which is named after a long-range military reconnaissance aircraft, has the deepest CG (center of gravity) location of all the Battle Ready putters, according to the company. PXG was able to drive weight farther back in the head thanks to its rear Tungsten weighting.

Also, the Blackbird’s arrow-like alignment features are designed to help golfers setup properly to their starting line. As Aaron Baddeley says, alignment is the most important aspect of putting.

The Gunboat, which is a reengineered version of a previous PXG Gen2 Gunboat putter model, is what the company calls its most forgiving Battle Ready putter. To go along with a T-shaped center structure, the Gunboat has an extra-wide white sightline on the crown for alignment assistance.

The new models, as with each of the Battle Ready putters, come with different hosel configurations: plumber’s neck, double bend and heel-shafted. Since hosel type effects toe hang, and toe hang influences how the putter matches up to your putting stroke, it’s important to know your stroke style before selecting an option. PXG says that plumber’s neck is for players with slight head rotation, heel-shafted is for players who over-rotate the head, and double bend is for those who tend to push the ball.

PXG’s Battle Ready putters are each currently available for $275, and that price lasts through the month of June. Weight kits are available for a $49 upcharge; the kits come with six weights that adjust the putter head up by at least 20 grams, or down by at least 15 grams.