How ‘The Hermanator’ helped Jim Herman extend his season 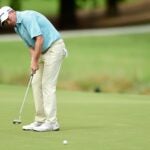 No one is going to mistake Jim Herman for “The Terminator,” but for a few days at the Wyndham Championship, the now-three-time PGA Tour winner somewhat resembled the cyborg assassin, played by Arnold Schwarzenegger, as he methodically took apart Sedgefield Country Club with robot-like precision.

Herman couldn’t miss with the putter over the final 36 holes, recording rounds of 61-63 to stage an impressive come-from-behind win to make the FedEx Cup playoffs. He gained a whopping 6-plus strokes on the field with the putter, piling up 444 feet of putts — the second-most this season by a winner (Kevin Na Shriners 558′ 11″).

It seems fitting that the Bettinardi Inovai 5.0 Tour mallet Herman used to vanquish the field is aptly named “The Hermanator.” For at least one week, the putter wasn’t a problem for Herman, who has now won with three different putters (and grips) on Tour.

At the 2016 Shell Houston Open, it was a Bettinardi Inovai 1.0 with a claw grip; the 2019 Barbasol was a Bettinardi DASS BB8 Mid with a conventional grip; and the 2020 Wyndham was the Inovai 5.0 Tour with a cross-handed grip.

“I just got my ball started online where I wanted with the correct speed, so that’s all you can want,” Herman said. “I made a lot of putts this week. For those that struggle putting, you definitely experiment often. I thought maybe last summer when I putted so well at Barbasol, maybe I was on to something, it would be something that stuck. Then I was off the putter and out of that style by the end of the wraparound Fall start.”

The putter has always run red-hot or ice-cold for Herman. There’s been very little in between. Since returning to the Inovai 5.0, Herman has found his stroke with the 358-gram mallet. Herman has gone back and forth between Bettinardi’s more conventional Flymill face milling and the F.I.T. (Feel Impact Technology) design found on his Inovai 5.0 Tour. The distinctive milling process removes 55 percent of the material from the face, giving each putter a softer, more responsive feel.

The 6061 aluminum head is paired with a stainless steel weight that pushes the CG low and back to improve forgiveness and stability — a combination even elite tour pros appreciate in a mallet profile.

The combination was good enough for Herman to punch his ticket to TPC Boston and pick up another Tour title. Not bad for a week’s worth of work for “The Hermanator.”