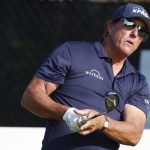 Phil Mickelson had an active week on social media, including teasing a club he's added to the bag.

Golf’s ultimate pitchman isn’t in danger of losing his crown anytime soon. The reigning PGA champion teed it up in Detroit with his sights set on Tour win No. 46, but that didn’t stop him from teasing gearheads with video (and screenshots) of a Callaway prototype hybrid that could see plenty of action at the upcoming “Match 4” in Big Sky, Montana.

“I think I found a hybrid I really love!” Mickelson tweeted out. “Putting it in play this week and I’m excited to be back in Detroit for the @RocketClassic. My swing feels like Kiawah again after playing [so-so] the last two weeks. Just in time for The Match.”

While Callaway Tour reps declined to comment on the design, it’s likely the hybrid will eventually make its way to retail in the coming months. Mickelson didn’t put the hybrid in play until last week, but it’s worth noting that when he played a practice round with fellow lefty (and Callaway staffer) Akshay Bhatia at the U.S. Open, the 19-year-old was already sporting the new club in his bag.

The club looks to have “Apex” markings on the sole and a weight port positioned closer to the face — an indicator that it could produce low launch and spin characteristics.

It took Troy Merritt 12 years to record a hole-in-one on the PGA Tour, but it was worth the wait. Despite finishing runner-up to Cameron Davis in a sudden-death playoff, the two-time Tour winner produced the shot of the tournament when his tee shot one-hopped and disappeared into the cup for an improbable ace on the par-3 11th hole.

The club Merritt used to produce the hole-in-one, a Titleist T200 5-iron, was seeing action for the first time. One week after Titleist launched T100 in Connecticut, the slightly larger T200 made its Tour debut.

It’s unlikely a Tour player will use a full set of T200 irons, but Merritt saw the benefits of going with a split set of T200 (4-5) and T100 (6-PW). Expect others pros to follow Merritt and employ a similar setup.

Davis also found a replacement for the 2-iron when he needs it in a T100 3-iron that seamlessly blended with the rest of his set.