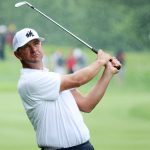 The conditions weren't ideal for the field Sunday at TPC Deere Run, but Lucas Glover still managed to carve out a 64.

The strategy needed to win the John Deere Classic has for years meant one simple thing: make a ton of birdies. The numbers back it up, too: no tournament has witnessed more birdies over the years than the JDC.

So when Lucas Glover mounted a comeback Sunday to win his first PGA Tour event in more than a decade, there was only going to be one way to get it done — with a bunch of circles on his scorecard.

Glover made five birdies on his final seven holes Sunday at TPC Deere Run, including four straight on holes 12 through 15 to vault himself to the top of a packed leaderboard and win by two. When asked later what his mindset was, it was unsurprisingly simple: “Make as many birdies as possible … That’s kind of what happened.”

Glover distanced himself on the closing stretch from a group that, at one point, saw nine players within one shot of the lead on the back nine. And at this course, at this tournament, it’s almost always best to have more holes to play. Glover had signed for a final round 64, but many birdie opportunities remained for those still out on the course. Being the clubhouse leader is always good, but it probably means the least at this tournament.

But every other player just … stalled out. Kevin Na, Ryan Moore, Adam Schenk, etc. Each player had to see Glover’s 19 under tally as a very reasonable destination, but none of them could get within two shots of that. Suddenly, they had run out of holes and a 41-year-old was holding up the trophy.

Glover famously won the 2009 U.S. Open at Bethpage Black, rising as high as 15th in the World Golf Ranking during the best stretch of golf of his life. He won the 2011 Wells Fargo Championship on Mother’s Day in 2011, and what followed after that was, as he put it, “a long 10 years.”

Glover dropped outside the top 600 in the world in 2015 after missing 19 cuts during the 2014 Tour season. But after doubling down on changing his fitness regiment, Glover’s results began to tick back up. Every year was just a little better than the previous one.

“It was just getting back refocused,” he said Sunday. “I always thought I could do this again, and I just needed to figure out the best way to go about it again.”

Those 19 missed cuts in 2014 were followed by just 11 in 2015. And then eight in 2016, five in 2017 and down to just three in 2018. Slow, steady and sure progress, culminating Sunday with another final round in contention and the first win he’d ever notched in front of his family.

“I remember that was my biggest takeaway when Tiger won his last Masters is that his kids got to see him as a champ,” Glover said. “That was a goal of mine, too.”

Now he’ll get another Masters moment of his own, earning his way back into the 2022 Masters field with his win this week.