Read our complete reviews of TaylorMade's newest irons below.

This year’s ClubTest is bigger and better than ever. To help you make sense of the mountain of high-tech new clubs on the market, we put all of the latest offerings from the top golf club manufacturers to the ultimate test. Below you will find the test results and complete reviews of six new TaylorMade iron models.

You can find the full list of ClubTest TaylorMade iron reviews here.

Our take: TaylorMade’s Stealth iron is categorized as a “game-improvement” model — a term that’s been used for years to describe clubs geared for the mid-to-high handicap golfer who craves, most importantly, forgiveness and ball speed.

Irons in this category of the industry have traditionally been bulky and slightly oversized to achieve their stated goals, but with a big assist from new technologies and computer-aided design, it’s no longer a requirement to go up in size to gain the forgiveness and speed you seek.

To hammer this point home, TaylorMade reduced the number of models in its Stealth lineup to just a single game-improvement model that’s designed to do it all, without the additional heft.

“I don’t know if I’ve ever hit an iron this long,” said a tester. “For years, I probably would’ve passed on this much distance, but as I gotten older, I’ve warmed to the idea of more speed. If this iron can give me one or two less clubs into the hole, I’m there. I love the fact that you get that much speed from an iron that has a reasonable blade length.” 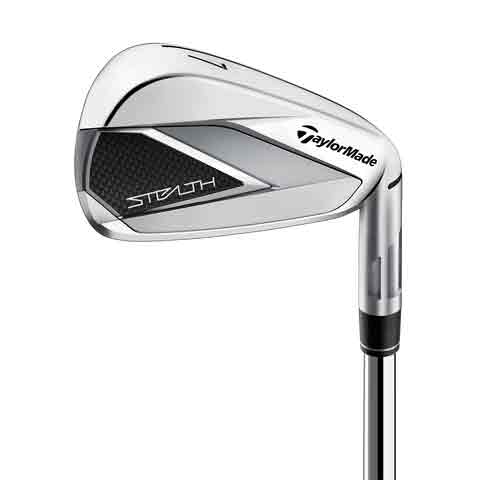 The details: While the iron is designed around a sleeker overall look — think P700 Series — TaylorMade didn’t make sacrifices to the technologies housed inside the hollow-body construction. A multi-material Cap Back design, which was initially introduced with SIM, continues to allow the face to flex without affecting the overall center of gravity location. The design is focused around a low-density polymer that supports the entire topline (heel-to-toe) and cavity, adding rigidity to the structure at impact.

Along with adding rigidity to the head, an active Thru-Slot Speed Pocket enlarges the unsupported area of the face, creating a larger sweet spot for golfers who struggle with consistent contact. To improve the overall sound and feel of the iron, a dampening system was positioned behind the 450 stainless steel face, in addition to internal ribs, to absorb unwanted vibrations and elicit a solid sound at impact.

TaylorMade also added a new wrinkle to the Cap Back design, removing 10 grams of mass from the toe and placing it deep in the head for a CG that’s 0.8 millimeters lower. The end result is a higher launch that should make it easier to stop the ball on the green, particularly for those who’ve consistently struggled to get the ball airborne.

Our take: Mention the P7TW is Tiger’s iron of choice and golfers tend to perk up. “I don’t even want to him them,” said one tester. “They just look too good. The blade length doesn’t look all that scary, which is something I didn’t expect.” You may not be able to pure it like the 15-time major winner, but it’s still cool to know you have his irons in your bag. 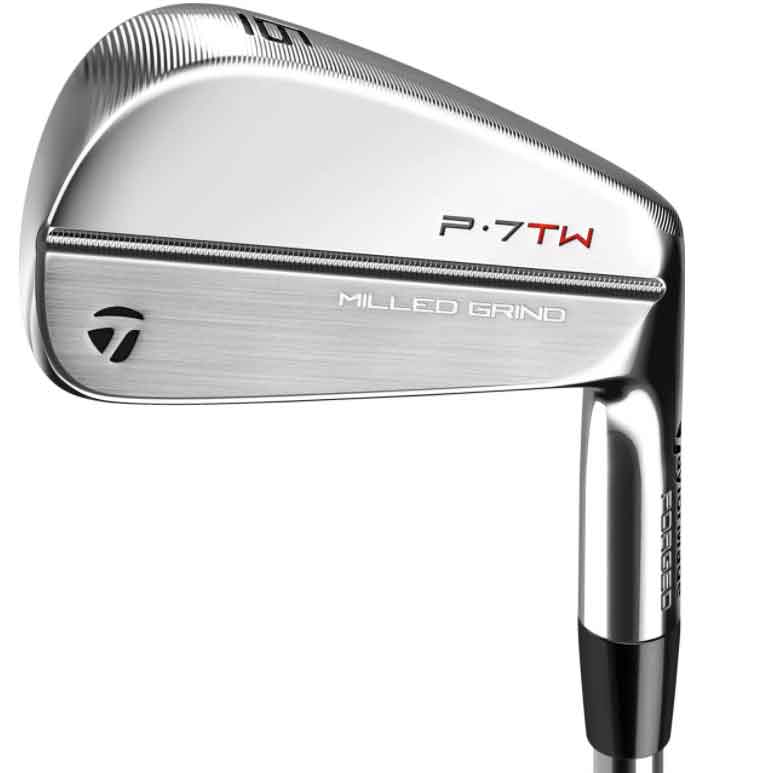 $1,999.99 for 3-PW
With the help of Tiger himself, these precision-engineered blade irons were designed for maximum performance featuring a longer blade length, thinner topline and progressive face height.
BUY NOW

The details: For the last several years, Woods has been using TaylorMade’s P7TWs, which were developed based on his exact preferences: longer blade lengths, thinner toplines and traditional lofts. The soles are also CNC milled to eliminate variance in head manufacturing, and tungsten slugs are positioned in the head to help with flight, feel and control. That’s what Woods wants, and the P7TW retail models are built to match his specs.

Our take: The gold-standard for better-player cavity-back irons continued to lead the pack during player testing, earning high marks for looks, sound and feel. “I can’t tell the difference between the P7MC and P7MB in the address position,” said one tester. “I’ve been playing blades forever, but I could see myself going the P7MC route. The felt like better and were just as workable as my blades. Maybe I get a little bit of forgiveness. It seems crazy not to consider them.” 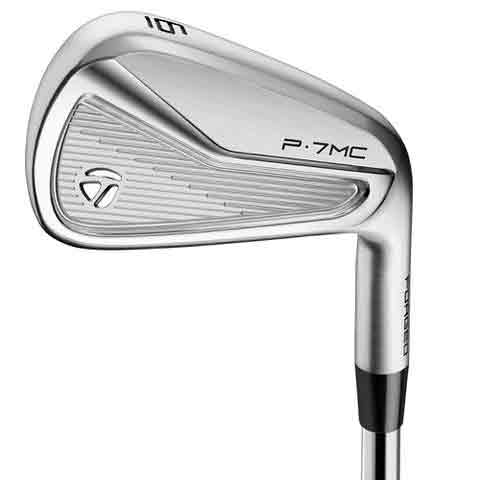 The details: Collin Morikawa’s iron or choice, the P7MC is forged from 1025 carbon steel in a 2,000-ton press to add strength and feel to each head. The thinned-out cavities (rather than muscle-backs) push weight out toward the edges. With more weight around the perimeter, there’s increased protection on off-center hits. It’s something you wouldn’t expect to get from a better-player iron, but it’s a possibility with P7MC.

Our take: For whatever reason, traditional muscleback irons always earn high marks. Maybe it’s the classic look or the lack of badging. Whatever the reason may be, the P7MB didn’t disappoint. “I probably shouldn’t be playing an iron like this, but it calls your name when you see it on the table,” said a tester. “You have to hit it. And when you pure one, there’s really no better feeling in the world. I wish all irons felt this good.” 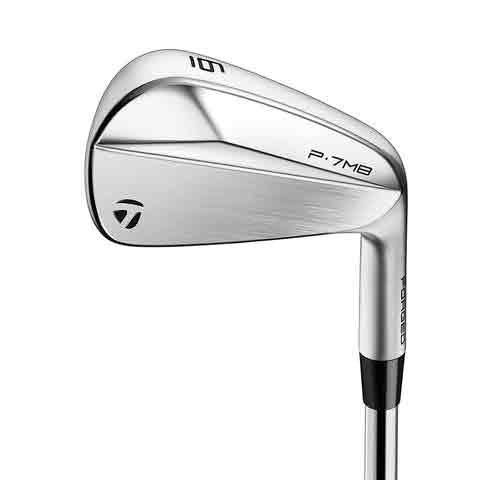 $175/club
Features include Tour-inspired shape with thin topline, progressive offset and narrow sole 1025 carbon steel made with compact grain forging for a solid, consistent feel, and machined face and grooves for precision and quality.
buy now

The details: TaylorMade’s P7MB irons were developed based on input from the world’s top golfers, including Dustin Johnson, so naturally they’re going to have the familiar blade shapes that better players prefer, including thin toplines, reduced offset and narrow soles. In addition to the expected looks, the modernized blades use geometrics in the back cavity to control mass placement throughout the set. Also, the P7MB irons are forged from 1025 carbon steel using a 2,000-ton forging press to strengthen the grain structures, helping provide that soft and solid feel our testers reported.

Our take: The best just keeps getting better. TaylorMade’s P790 is truly an iron for every golfer. Better players commented that the reduced offset and clean profile matched their eye, while mid-handicappers marveled at the forgiveness they received from a smaller shape. “It’s rare that an iron crosses so many handicaps,” said a tester. “But I honestly don’t know if I could pick a guy that fits this iron.” Sometimes that’s a good thing. 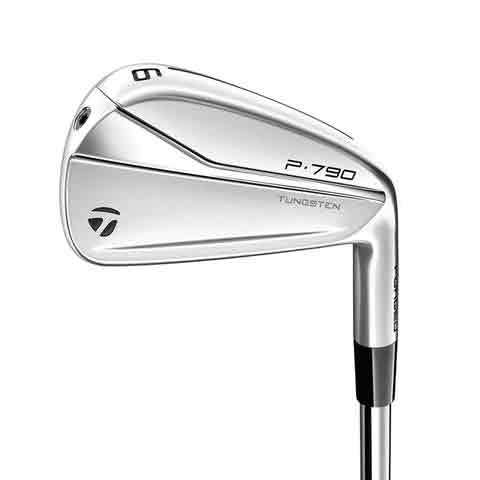 $185/club
Features include SpeedFoam Air, which provides up to 3.5g of weight savings that has been redistributed to further optimize mass properties for better launch conditions, and a sweet sound and solid feel while delivering a fast, flexible face.
buy now

The details: Rather than using the original SpeedFoam material between the face and body of the irons, TaylorMade has developed a new “SpeedFoam Air” urethane material that’s 69 percent less dense. The lighter weight design equates to an average of 3.5 grams saved in each iron head, according to the company.

Thanks to the weight savings from SpeedFoam Air, TaylorMade was able to lower CG (center of gravity) to improve launch, and the company is reporting that the new 2021 P790 iron heads have the thinnest faces in the franchise’s history.

The multi-material heads have 8620 carbon steel bodies and forged 4140 steel faces that measure 1.5mm in thickness. Also, the face structure itself was redesigned for this year after TaylorMade’s team charted the most common impact points from “thousands and thousands” of golfers. According to the company, the sweet spot now better aligns with the center of the face and improves shots hit on the high-toe and low-heel.

Our take: The P790 has an even cleaner look, but that doesn’t mean it’s for everyone. This is where the P770 comes in — a slightly more compact version of TaylorMade’s uber-popular P790. “You get some speed out of this one,” said a tester. “I’m not sure what I was expecting to get, but I could definitely put these in at the top of my iron set, or maybe play a full set if I’m feeling frisky. I like that versatility.” 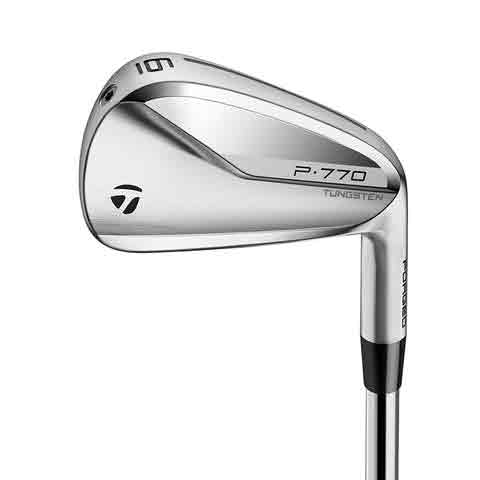 The details: Think of the P770 as a slimmed down P790. The thin topline, reduced offset and shorter blade length is paired with a distance-inducing, hollow-bodied construction that bumps up the speed. Housed inside the cavity is TaylorMade’s familiar urethane SpeedFoam that enhances feel, something our GOLF testers appreciated.

Shop more of the latest gear for your game