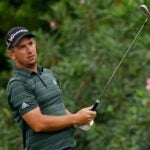 Lucas Herbert has found success on the PGA Tour without a 5-iron in the bag.

Lucas Herbert is used to the confused looks from fellow pros and caddies when he pulls a TaylorMade P7TW 6-iron from the bag. The recent PGA Tour winner isn’t the only one playing the Tiger Woods-designed irons, but he’s without a doubt the only pro walking around with a set that immediately jumps from 4-iron to 6-iron.

“It’s pretty funny when I hit a 6-iron into a par 3 and you watch the other caddies look into the bag and they only see a 4-iron and a 7-iron and they see a big gap in between and they have no idea,” Herbert said.

No, Herbert’s P7TW 5-iron didn’t grow legs and walk away. Unlike most golfers, Herbert doesn’t put much weight into the numbers stamped on the head of each iron.

“Just because it says it’s a 4-iron that doesn’t mean that’s what it is,” he said.

In a move that’s reminiscent of Webb Simpson’s decision to alter several club lofts — along with removing the 6-iron — to get a fourth wedge in the bag, Herbert found the 5-iron to be non-essential after doing a loft-gap deep dive.

Instead of sticking with the status quo iron setup and working around the odd 5-iron gapping, Herbert chose to jettison the 5-iron and make loft adjustments to his 4-iron and 6-iron to fill in the gap.

“We were playing around with it one day and we thought what if we strengthen a 6-iron and weaken a 4-iron?” he said. “It kind of just happened like that. I wanted to try it straight away. It was one of the best things I ever did. It meant that I could play a driver, a 3-wood, a 5-wood and a 3-iron. You get that flexibility at the top of the bag.”

“I’m a long player so you want to keep as many options at the bottom of the bag as possible because you’re going to have a lot of wedges into par 4s and third shots into par 5s as well,” he said. “That was why it came about and to me it doesn’t really feel like a gap because you can play a 5-iron and bend the 5-iron to a 4-iron loft and you get the same effect.

“I can count on one hand the amount of times we’ve had a distance where we were like dang that’s a perfect 5-iron. It might be when you’re in the rough and you have a lie you aren’t sure about and there’s water short of the green and you don’t want to hit a soft 4-iron because that’s gonna jump and a 6-iron if it spins it’s not gonna get there and this would be a perfect time to hit a rip 5-iron.”

If there’s one thing recreational golfers can learn from Herbert’s iron setup, it’s that you shouldn’t play a full set simply because it’s what everyone else in your regular foursome is carrying. If you find yourself with an iron in the middle of the set that you rarely use, it might make sense to connect with a certified fitter to determine if you really need that club in the bag — or if you’d be better off removing it and making adjustments to accomodate a particular yardage or need.

It’s all about building a setup that brings out the best parts of your game.