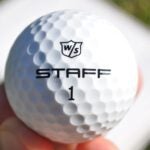 In a sea of glossy golf balls, Wilson’s new Staff Model R ($44.99 per dozen) stands out from the crowd. The matte finish on the four-piece ball has been done before by other manufacturers to help reduce glare. But there’s more to the unpainted look than mere aesthetics.

According to Wilson, the Staff Model R is the first of its kind to feature a raw, unpainted urethane cover that’s specifically designed to improve aerodynamic efficiency and stability.

“Staff Model R is unpainted as the dimple cross-section geometry and the pattern of dimples on a golf ball are critical aerodynamic elements that affect the flight performance of the ball in terms of trajectory, distance and directional stability,” said Bob Thurman, VP of Wilson Labs. “These dimples are a mere 0.004-0.007 inches deep and super sensitive to the level of paint on the ball.”

Stock up on balls in our Pro Shop During internal testing, Thurman’s team found other tour-quality balls currently in the market moved as much as plus-or-minus 25 feet on a 5-iron shot from 200 yards. A black-light also revealed inconsistencies and “paint pooling” in some dimples that could affect flight consistency.

“This can significantly affect the trajectory and the directional stability of the flight of the ball,” said Frank Simonutti, Wilson’s global director of golf ball innovation. “By eliminating the paint, we were able to eliminate all of the shortcomings attributed to the paint process used on all golf balls.”

For golfers who choose to take Staff Model R for a spin, it’s important to note the raw version also differs from its glossy counterpart in a more noticeable area: stain resistance. Without a paint layer to protect the cover against stains and UV rays, Wilson confirmed the ball will eventually stain and discolor during play based on the turf, weather and conditions you typically play.

In other words, don’t expect the ball to look pristine for 18 holes. Performance, however, should not be affected.

As far as the overall technology and design, the R version mirrors the Staff Model that was released earlier this year. The thin urethane cover construction assists in producing more distance off the tee, while still maintaining the soft feel, control and spin characteristics necessary for greenside and partial wedge shots. A 362-dimple pattern was also added to help the ball tackle blustery conditions.

The “engine” for the ball is comprised of a larger, firmer CIS polybutadiene rubber core and two mantle layers. An inner mantle layer made of Dupont HPF polymer delivers a combination of feel and speed, while the outer mantle — a blend of firm Surlyn ionomer materials — helps generate added spin around the green by activating the cover.