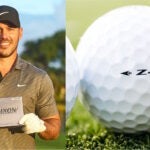 When Brooks Koepka recently signed with Cleveland-Srixon to play the company’s equipment, it was actually the golf ball performance that truly sold him on the deal.

Ahead of The Match against Bryson DeChambeau, Koepka switched into a new ball from Srixon, called the Z-Star Diamond.

“Z-Star Diamond is a game-changer for me,” said Koepka, in a press release. “This golf ball was a major driver in joining Srixon, and it’s been a seamless transition. The performance is really impressive, and I feel confident heading into the new tour season.”

According to Srixon, the Z-Star Diamond combines design properties from its two current tour ball offerings: the Z-Star and Z-Star XV. It has a thicker thermoplastic urethane cover, though, helping produce more spin and control on iron shots.

As with the Z-Star and Z-Star XV, the Z-Star Diamond version also uses “SpinSkin with SeRM” technology in the cover, which improves durability and maximizes spin due to its flexible molecular bonds. The cover has 338 dimples on its surface that are designed to reduce drag and increase lift, helping increase distance and improve control in windy conditions.

Inside the cover, the Z-Star Diamond ball has a new FastLayer Core that’s soft in the center and gets progressively firmer toward the edge to increase ball speed.

Compared to Srixon’s other ball offerings, the Z-Star Diamond is made to produce more spin on mid- and long-iron shots to help with stopping power on the greens.

Who’s the Z-Star Diamond made for? Srixon says the ball is geared toward high-speed players.

“Z-Star Diamond has been a very popular model with our PGA Tour staff, and the Diamond should definitely be considered by the higher-swing-speed, better player looking for the best performance available,” said Jeff Brunski, Vice President of Research and Development at Srixon.

The new Z-Star Diamond will be available in a Pure White colorway on Jan. 21, selling for $44.99.