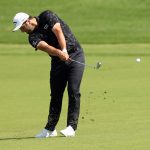 Jon Rahm clears his lead hip during his golf swing. When his left hip gets tight, as Joe DiChiara explains, his swing suffers.

No golfer sets out to intentionally get worse. We’re all just trying to have fun and shoot our lowest scores possible. That being said, the ways that many golfers go about trying to improve their swings may actually be detrimental in the long run.

Like many, your practice sessions may entail beating a large bucket of balls at the local driving range, searching for an answer. For some, such as Ben Hogan, digging it out of the dirt can be helpful. Or, as biomechanist Joe DiChiara explains, you might actually just be instilling improper compensations that lead to injury and destructive movement patterns.

That is, unless you’re focused on fixing the core issues of your golf swing and body movements.

Think of 3D motion like an x-ray of your golf swing; the systems provide data on what your body does within the swing that can’t be gathered with the naked eye; measurements such as bend, rotation, sequencing and force. Combined with launch-monitor feedback that yields golf ball and club data, 3D motion can help objectively diagnose your actual problems.

DiChiara works with every level of golfer, from major champions to high-handicap hackers, creating focused practice programs meant to have long-lasting positive effects. For example, in a session with Jon Rahm at TPI (Titleist Performance Institute), DiChiara helped capture data on Rahm’s lead hip. They noticed that when his left hip is tight, his performance suffers. Therefore, the 3D information showed Rahm and his trainers he needed to focus on that part of his body during warm-ups and workout sessions.

On GOLF.com’s recent Fully Equipped podcast, co-host Kris McCormack (VP of Tour and Education at True Spec Golf) spoke in-depth with DiChiara on 3D motion, how to improve your swing using the system, and the common misunderstandings of golfers. Below, we look at four important takeaways that can help in your quest for better scores.

There are various ways to capture 3D motion, such as using inertial sensors, electromagnetic systems, or optical systems. DiChiara opts for an IMU (Inertial Measurement Unit) that uses up to 16 sensors, which attach to the body as you make a swing.

As DiChiara says, some higher-handicap golfers say they’re not good enough to put their swing on the IMU. He says the opposite is true, though.

“I think it has more application for the recreational golfer because as the skill level regresses and the handicap is a little higher, these players tend to have a little bit less awareness of where their body is in space and what they need to do in their golf swing,” DiChiara said on Fully Equipped. “So, to have this objective feedback of measurement to say to them, ‘You are feeling X but the reality is Y’ — feel vs. real, perception vs. reality — and then we can bridge that gap.”

DiChiara says that while sessions with a touring pro get more detailed, large improvements come more quickly for higher handicaps.

High-handicap golfers may be surprised to hear this, but the way your body moves during the swing is actually very repeatable, according to DiChiara. Most poor golfers, however, struggle with club control and awareness of where the face angle is throughout the swing. This causes inconsistent results.

As discussed on the podcast, though, these problems can be mitigated with proper equipment and improvement to your body patterns.

By getting fit into shafts and club heads that match your swing, your equipment can complement your particular movement pattern and help square the club more reliably. Additionally, by gaining an understanding of your typical body movements through 3D-motion capture, and working to reduce detrimental moves, you can achieve greater consistency.

Instead of beating balls on the range and trying to stumble on the cure, 3D motion provides answers to those with a trained eye. Experts, like DiChiara, interpret the information and relay it to the golfer to create new feels.

“It’s about the interpretation of the data and then applying it to a biofeedback program that allows them to feel what they should be doing,” DiChiara says. “Then they can go through and apply that feel into a practice program that’s more qualitative rather than quantitative. Not just beating 100 balls, maybe cutting that time in half. Saving time, but getting much more benefit out of their practice program.”

3. The myth of “muscle memory”

Surely you’ve heard someone say they need to ingrain “muscle memory” by hitting balls at the range. DiChiara says that phrase alone is a pet peeve of his, because, “there’s no memory in your muscles,” as he says.

“The brain sends signals down to the body based on a number of factors, whether it be physical limitations, past environment, past habits, things like that. We call those motor patterns,” DiChiara explains. “Those are hard to break. … More often than not, people that are out there saying, ‘I just have to ingrain that muscle memory,’ they’re doing just the opposite, to be honest with you. They’re making it way worse on themselves at that point.”

DiChiara says most range practice is just a search for immediate gratification rather than long-term fixes.

4. So you want to overhaul your swing, huh?

Trying to make large-scale changes to your golf swing is commendable, but as DiChiara says from his experience, it’s not always realistic and can take years.

“You can reduce or improve your current pattern in terms of the severity of what the misses are, and that’s going to help you play much better golf. But to change a movement pattern, really takes, we’re talking years,” DiChiara says. “The person that wants to play golf once a week and not hit any golf balls in between, trying to change a pattern, we’re not going to see much change.”

Instead, DiChiara speaks on “pattern reduction” and “tightening the bell curve” as it relates to movement of your body. For example, if you tend to come over the top during your golf swing, 3D motion can help explain why, and that data can be used to create a new feel within the swing. While you may not go from a 50-yard slice to a 20-yard draw, you may be able to reduce that slice to something more manageable, and reduce the risk of injury along the way.

As you attempt to rid your swing of its old issues, he suggests focusing on input (how your body moves) rather than output (where the ball goes) during the initial stages of developing a new pattern. Grade yourself on how well you’ve performed the new move rather the shot itself, and eventually your brain will rewire and send different signals that improve results.

Golf is endlessly difficult, and the path to improvement is a long, winding road. The goal of 3D motion is to provide a more direct and focused blueprint for future success. Gimme that: Add the Nike Jordan ADG 3 golf shoes to your rotation

Mondo Combos: A set of irons doesn't have to mean just one model anymore

Gear Questions You’re Afraid to Ask: How often should I change golf balls?

Looking for a perfect post-round pair of shoes? Check out these 5 comfy slip-ons