Wall-to-Wall Equipment: Why Viktor Hovland is using his caddie’s 3-wood 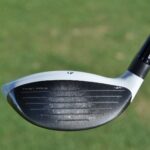 Hovland started using his caddie's 3-wood when his clubs showed up late at Kapalua.

PHOENIX, Arizona — The dimed-out mark on Viktor Hovland’s 3-wood is the kind of wear pattern you’d expect to see on a club belonging to one of the best players in the world. It’s tight and consistent. The heel and toe areas on the face are pristine.

The club resides in Hovland’s bag, which would make you believe it’s the same TaylorMade SIM Ti fairway wood he’s used since last year — except you’d be wrong.

If you’ll recall, Hovland’s clubs were lost in transit on the way to the Sentry Tournament of Champions in Maui. Ping built him fresh sticks as a backup plan if his clubs never arrived. (They finally showed up right before the first round.)

But what about the non-Ping clubs in the bag? It just so happens that Hovland and his caddie, Shay Knight, play the same 3-wood build — the only difference is a Fujikura Ventus Blue 7X shaft — all the way down to the Golf Pride New Decade MultiCompound grip.

Hovland figured he’d use Knight’s 3-wood until his gamer arrived, but something happened along the way: the Norwegian got attached to his caddie’s club.

More than a month into 2022, there’s no sign of Hovland giving it back anytime soon.

The current wear mark on the face might belong to Hovland, but Knight, who’s a good player in his own right, deserves some credit for breaking in the club for his boss.

“Far as I’m concerned, it’s his club now,” Knight said with a laugh.

Scottie Scheffler’s new putter was worth the wait. Following a December trip to the Scotty Cameron Putter Studio where he worked with Tour rep Brad Cloke, Scheffler chose to shake things up with a new Special Select Timeless Tourtype GSS Tour Prototype that finally arrived on his doorstep prior to departing for TPC Scottsdale.

Unlike most pros who choose to change putter when their game hits the skids, Scheffler merely wanted a fresh look on the greens, which prompted the switch from the Super Rat 1 to a Newport 2-style head with sharper edges.

“He just wanted to switch things up a little bit and give himself a slightly different look heading into 2022,” Cloke said. “Prior to visiting us in the Studio, he’d been messing around with an older Newport 2 Timeless he had at home. He’d added bunch of lead tape to the sole to try and get it to a similar swingweight as his Super Rat. He really liked the profile but the feel wasn’t exactly where he wanted it, so we went to work on building him a new setup with adjustable weighting.”

Scheffler’s new wand was built at a finished length of 36.25 inches with two 25-gram adjustable heel-toe weights in the sole. The newly minted Tour winner led the field in putts per green in regulation (1.66) and ranked second in SG: Putting (plus-6.49) with the putter.

Ping unveiled new PLD (Putting Lab Design) putters in Phoenix, but it’s the overall look that had gearheads talking. The new paint fill and PLD callout in the cavity is a hint that something is coming down the pipeline in the not-too-distant future. Recreational golfers have been clamoring for the opportunity to get their hands on a PLD Anser, Anser2, Prime Tyne 4 and DS72. They won’t have to wait much longer to make that dream a reality.

Viktor Hovland’s driver has been in the news a considerable amount over the last several months, only his most recent change wasn’t a case of the Norwegian needing a replacement for a busted big stick. Hovland’s recent speed gains revealed a decrease in spin rate to roughly 1,800-1,900 RPMs — a number that toes the line between being absolutely perfect and categorizing the 24-year-old as an “underspinner.”

In a move that somewhat mirrored the iron dilemma, Ping reps made slight modifications to combat the lower-than-comfortable spin rate and increase launch — it was 10 degrees with Hovland’s previous driver build — removing the shaft tipping from his Fujikura Speeder 661 TR TX shaft to soften the overall build.

“His coach, Jeff Smith, spoke to Fujikura about some solutions, and the first thing we decided on was removing the tipping,” Oates said. “Instead of being tipped 1 inch as it had been in the past, there’s no tipping on this one. But it’s still the same length.”

The loft also increased slightly from 8.4 degrees to 8.6 degrees and hot melt (three grams) was added to the toe to keep Hovland from overdrawing the ball since his path started moving more right.

“All of those things are going to help him add spin,” said Ping Tour rep Kenton Oates said. “When he was on the range, we saw 11-12 degrees of launch with about 2300 RPMs of spin.”

Scant details are available, but it’s worth mentioning that Xander Schauffele (pictured), Jon Rahm and other members of Callaway’s Tour staff have been testing tour versions of the Rogue ST fairway wood. Schauffele received his first look at the club recently and plans to do additional testing in the coming weeks.

Scotty Cameron added two more models to the yet-to-be-released Phantom X lineup in Phoenix. Phantom X 9 and 9.5 Tour Prototype heads have a different look when compared to the 7, 7.5 and 7.2 that debuted on Tour at the Sony Open. Hudson Swafford has already logged a win with the 7.5 head.

“The first time [Hudson] put it down, the putter just set up perfect for him,” said Scotty Cameron Tour rep Drew Page. “He was really impressed how it sat on the ground, and thought it looked great. It’s been the same story for many players who’ve put Phantoms in play. ‘Man, this thing sets on the ground perfect. I really like the way it looks.’ He rolled a few putts with it on Tuesday, I just threw his grip on and it went into play.”

Quick-hitters: Going one-on-one with new Cleveland/Srixon staffer Brooks Koepka. … The story behind Jim Furyk’s eBay putter finds. … Check out the Toulon “Bullseye” putter that surfaced on Tour. … Keith Mitchell picked up more ball speed with a new Mizuno ST-Z 220 driver. … Talor Gooch switched to an Odyssey White Hot OG #7 with a plumber’s neck for a fresh look on the greens.