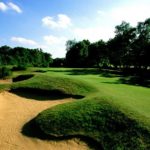 Harry Vardon left us much more than six Open wins and a grip. Woodhall Spa is his design legacy, an intriguing heathland/inland-links blend, an oasis of tumbling terrain amid the surrounding flat fenland of Lincolnshire. Deep bunkers are Woodhall Spa’s defining trait, along with plentiful gorse and a stellar set of par-3s. Credit architects H.S. Colt and S.V. Hotchkin for enhancing Vardon’s work and turning the course into one of golf’s supreme shotmaking tests. (Up 12)