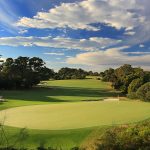 The immense appeal of Alister MacKenzie’s Golden Age masterwork is captured by former world No. 1 Nick Faldo: “I love the way it plays firm and fast-running, the way the bunkering frames and almost intrudes into the putting surfaces and the brilliance of the bunkering style with the native scrubby look. I’m also a fan of the often very wide fairways that reward positioning and of the mix of long and short par-4s. Add to this the splendid contouring of the greens and the rich variety of approach shots that you play into those greens.” Sir Nick said it all. (Photo: Gary Lisbon)