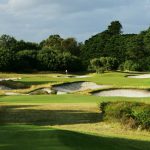 Confident in his own work, Alister MacKenzie freely lauded the work of others. In the United States, he considered Perry Maxwell to be as talented as anyone; in Australia, his man was Alex Russell, who deserves full credit for the East Course, in addition to Paraparaumu Beach, Lake Karrinyup and other gems in Australia and New Zealand, including Yarra Yarra. The panel’s appreciation of the East Course raises the question: What is the finest 36-hole day in golf at one location? Winged Foot, Bandon, Sunningdale or here? (Photo: David Cannon/Getty Images)