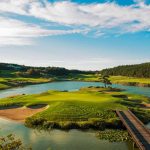 Nine Bridges’s appeal starts with its tranquil setting on Jeju island, with holes etched into pine-clad rolling topography in the shadows of Mount Halla, Korea’s tallest peak. Lakes, creeks and wooded slopes not only contribute to the beauty and variety but also are seamlessly integrated into the design. When Nine Bridges has played host to the PGA Tour’s CJ Cup, the pro routinely praise both its challenge and presentation. (Photo: Courtesy Nine Bridges)