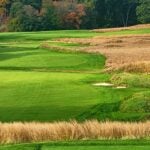 Some critics of rankings grumble that hosting a major unduly elevates a course. Is that true for Myopia Hunt, given that it has played host to four U.S. Opens? Probably not, given its last one was in 1908! What helped Myopia continue to rise in the list was appreciation for Gil Hanse’s restoration work whereby trees came down, and fairways were expanded/reconnected to Herbert Leeds’s fabulous pit bunkers. The handsome blue stem rough is best admired from a distance but there is no hiding from the severely titled greens at the 4th, 6th and 13th. None of those two-shotters is long but the slopes with which Leeds imbued them about 120 years ago define treachery at modern green speeds. With the wind more evident and the playing surfaces firm, the course’s thorny playing attributes are once again on full display. Fun fact: The winning score at its four U.S. Opens averaged nearly 324, or 81 strokes per round.