The PGA Tour’s Florida swing is set to tee off this week with the Honda Classic at PGA National Golf Club in Palm Beach Gardens. The Champion Course at PGA National has played host to the first event of the Florida swing since 2007. While PGA National offers golfers four other courses to play (Fazio, Squire, Estate, and Palmer courses), the Champion Course is the sole one implemented for the Honda Classic. Here’s everything you need to know about this week’s course.

The design of the course: Jack Nicklaus completed his first of three redesigns of the Champion Course in 2002, followed by a second renovation in 2014. This included the implementation of Bermuda grass, the redesign of the par-4 14th hole, the addition of more bunkers and water, and four other holes on the course were increased to their original distance. The course underwent a third redesign last year that saw enhancements to the grass and greens. The 18-hole, par-72 course is described as having fast, spacious, and accepting greens, well-groomed fairways, and generous landing areas. The track offers golfers five sets of tees to choose from and runs 7,045 from the furthest tee boxes. The Champion Course rated as the second-most difficult track on the PGA Tour in 2018 with an average score of 2-over par, as only Shinnecock Hills rated as more difficult last year.

The Bear Trap: Arguably the most-arduous three-hole stretch in professional golf is The Bear Trap, which consists of the par-3 15th hole, par-4 16th hole, and par-3 17th hole. Golfers will likely have little choice but to finish no better than par on these three holes. Here’s a full breakdown of each of the three holes that make up The Bear Trap at PGA National. 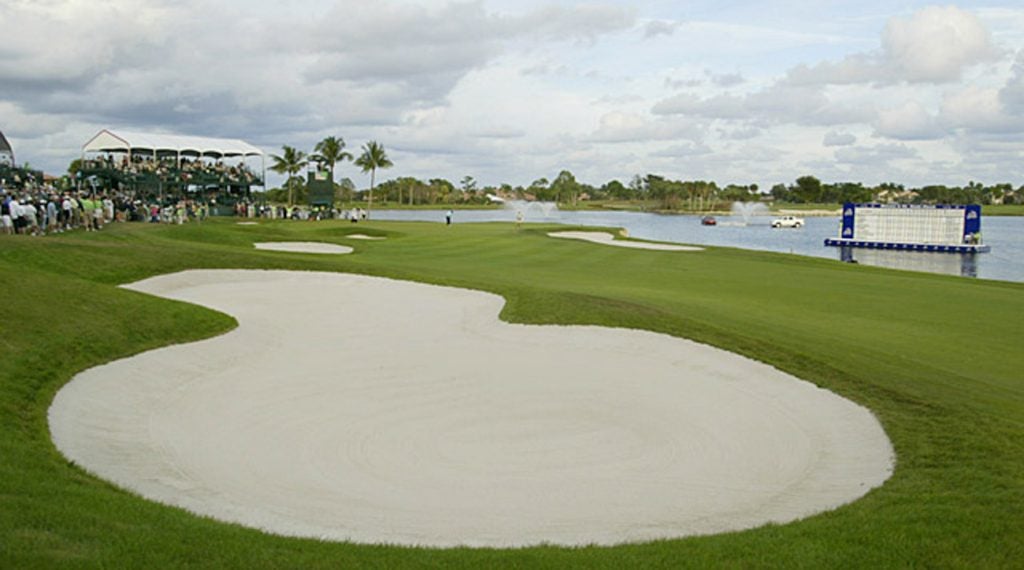 The Champion Course is considered one of the most difficult courses on the Tour.
David Walberg For Sports Illustrated

The par-3 179-yard 15th hole: As the first hole of The Bear Trap, the 15th tee plays as the number 16 handicap on the course. With a scoring average of 3.391, the 15th hole has the smallest percentage chance for birdie on the course at five percent. It was the second-most difficult hole on the course last year, and the ninth-most difficult tee on the PGA Tour. The back of the 15th green was raised to make it more visible, while the pin is located on the back right of the green. It typically plays into the wind, and a shot aimed at the bunkers to the left of the green will likely avoid the water to the right of the green.

The par-4 434-yard 16th hole: The second hole of The Bear Trap plays as the number two handicap and has a scoring average of 4.262. With a dogleg right, the 16th hole is considered the most-difficult par-4 of the 90 holes of golf available at PGA National. The hole slopes off the tee toward the water on the right of the fairway, but the addition of a new bunker can catch balls that roll too far to the right. Golfers who are able to keep their tee shots to the left likely face a second shot over the water and into the wind like the 15th hole.

The par-3 190-yard 17th hole: The third and final hole of The Bear Trap was the hardest hole on the course last year and the third-most difficult on the PGA Tour in 2018. As the Tour’s most-arduous par-3 tee last season, the 17th hole plays as the number 18 handicap and has a scoring average of 3.533. It also has the highest percentage chance for bogeys or worse on the course at 40 percent. As the shortest hole on the course, the wind continues to play a huge factor like it does on the previous two holes. With water to the right and a bunker to the left, the only place to put your tee shot is on the green and towards the pin on the middle left of the green.