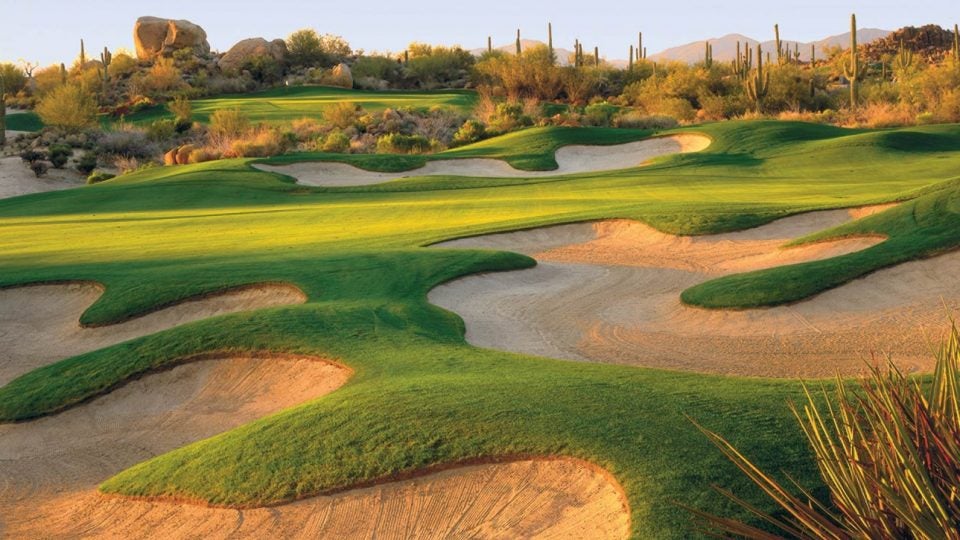 Troon North in Scottsdale is a must-play for golfers visiting Arizona.

The sun is coming out, the birds are chirping, and baseball season is finally back as MLB teams report for Spring Training in Florida and Arizona. And baseball’s version of its preseason just so happens to take place in two of the most popular states for golf in the country.

Scottsdale is strictly NL West country, as the hometown Diamondbacks are accompanied by two of its divisional rivals in this city. But fans of all three teams would be hard to find a better public course to play in Scottsdale than Troon North. Troon North has two 18-hole, par-72 tracks: the Pinnacle and Monument courses. The Monument was built in 1990, while the Pinnacle came in 1995. Both courses, which were designed by Tom Weiskopf and Jay Morrish, were built to honor tracks commonly used for the British Open. At 7,039 yards, the Monument runs slightly farther than the 7,009-yard Pinnacle, although the Pinnacle ranks higher (25th to 58th) in our Top 100 Courses You Can Play ranking. Prices range from $139-$309. 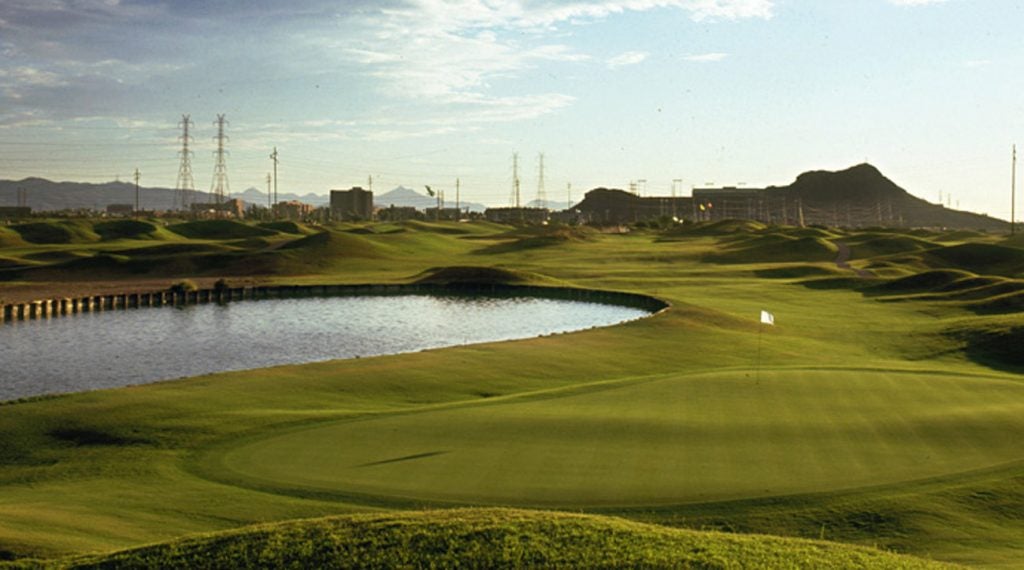 Halos fans can be found around Tempe over the next month, which means they can check out ASU Karsten, the home course of the Arizona State Sun Devils. The Pete Dye-designed 18-hole, par-70 track opened for business in 1989, but the Scottish links-style course will close for good come May, so time’s running out. This is one of the few places, if not the only, where you’ll ever see Angels and Devils together. Prices range from $47-80. 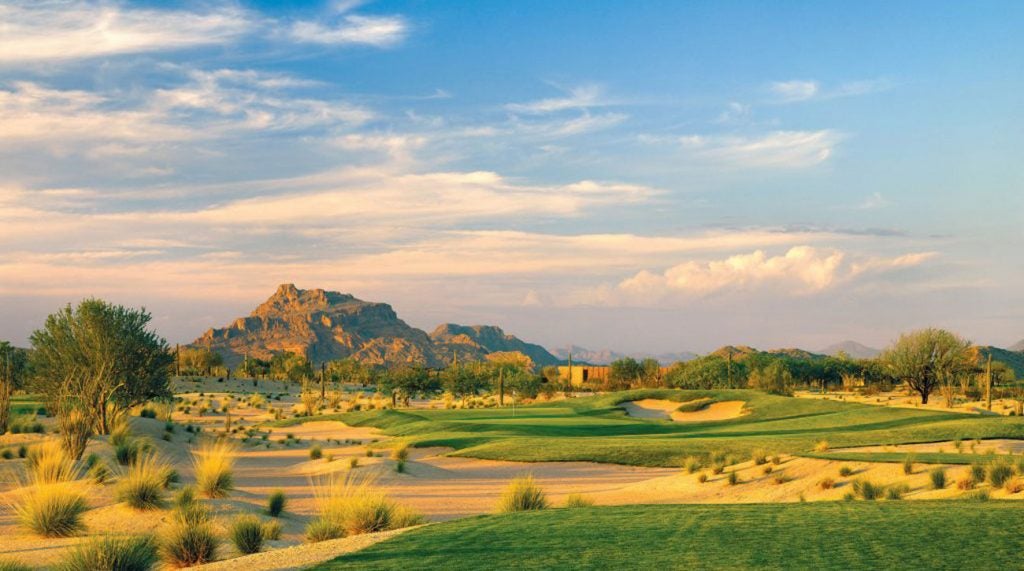 Longbow is where Cubs and A's fans can be seen teeing it up.
Lonna Tucker

Mesa is just one of several Spring Training cities in Arizona to have an American League and National League team inhabiting it, as the Cubs and Athletics both call Mesa home. But there’s one course for both fanbases to play at: Longbow Golf Club. Longbow first opened in 1997 and was designed by course architect Ken Kavanaugh. Prices range from $80-162. 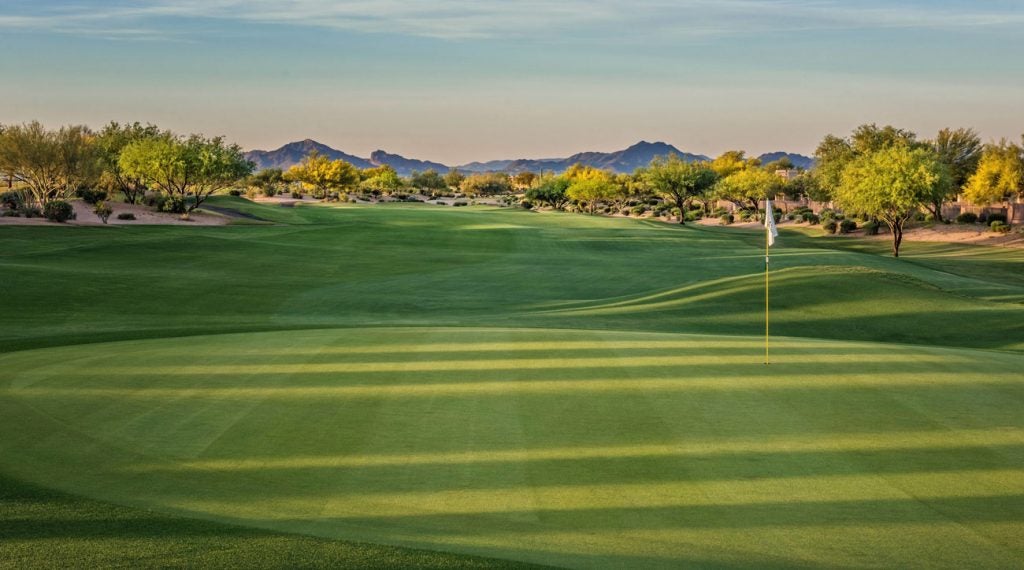 Like Scottsdale, Phoenix is also the home to three MLB teams during Spring Training. And for many fans, Marriott will be their home base when not watching baseball at the ballpark. It just so happens to be that one of Phoenix’s best public courses, Wildfire Golf Club, is associated with Marriott. Wildfire has two courses that are rightfully named after their famous designers, Arnold Palmer and Nick Faldo. Palmer’s course came first in 1997, while Faldo’s followed five years later in 2002. The Palmer Course is a par-72 while the Faldo Course is a par-71. While the fairways on both courses use Bermuda grass over-seeded with Rye grass, the greens feature Mini-Verde grass. Rates are $109-199. 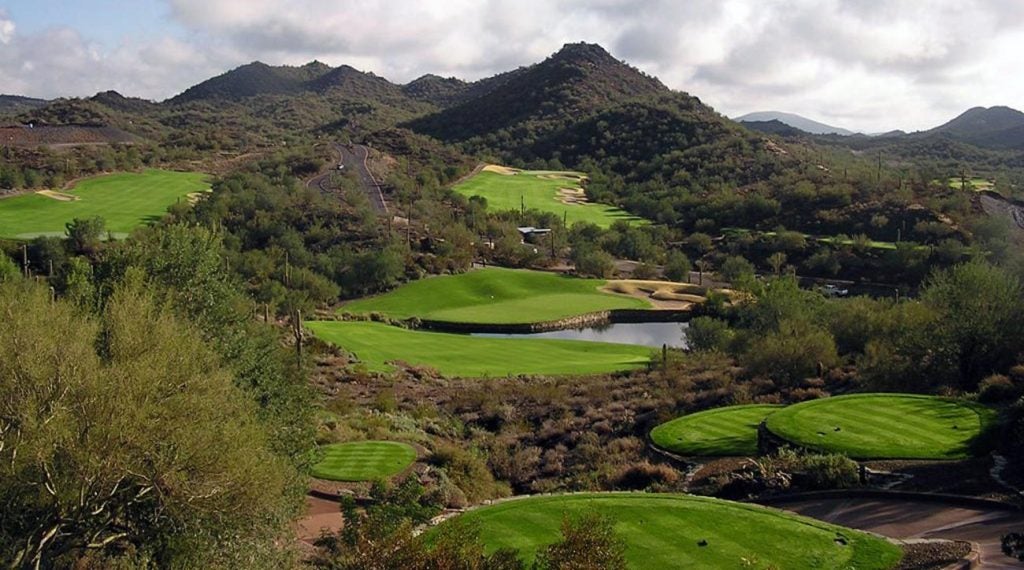 A pair of West Coast teams spend their preseason in Peoria, so Quintero Golf Club is a must-play for Mariners and Padres fans. Designed by Rees Jones and built in 2000, Quintero runs 7,249 yards from the farthest tees. While the fairways are made from Bermuda grass, the greens use Bent grass. Prices range from $145-283. 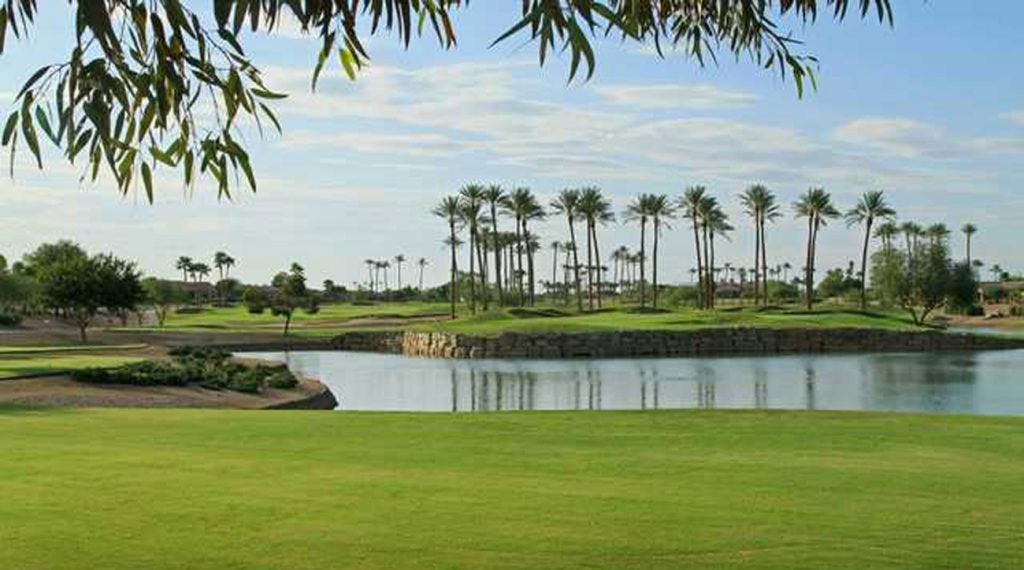 A view over the water at the seventh green at Cimarron.
Courtesy of Golf Advisor

The lone Arizona city to play host to two American League teams for Spring Training is Surprise. But it shouldn’t be any surprise to Rangers and Royals fans that good golf awaits them at Cimarron Golf Club upon arrival in the desert. The 18-hole, par-72 course was designed by Greg Nash and opened for business in 2003. You can snag a tee time for under $100. 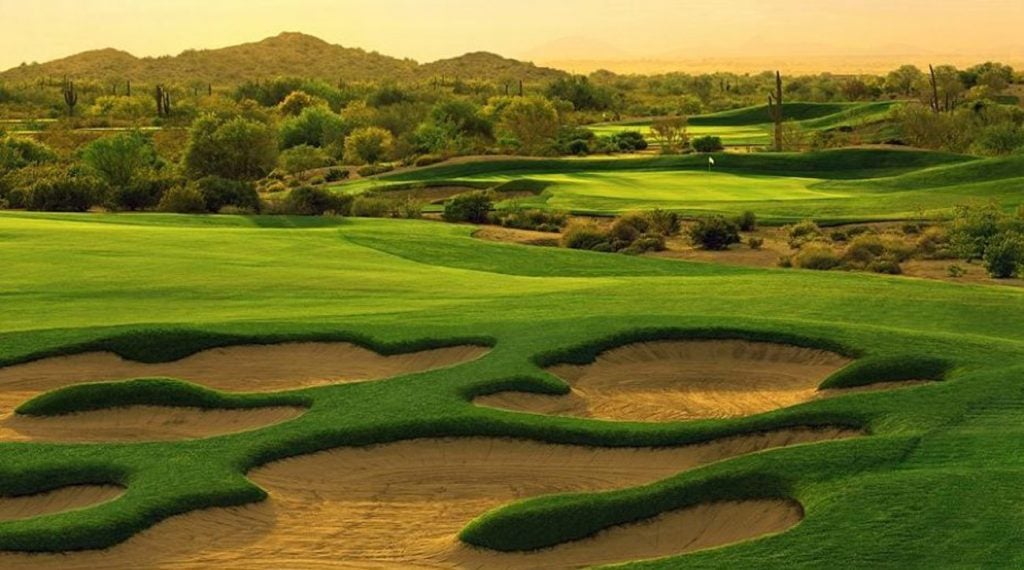 The Golf Club of Estrella is a Jack Nicklaus course.
Courtesy of Golf Adviser

One of the biggest interleague and interstate rivalries in baseball calls Goodyear its Spring Training home. While Indians and Reds fans might disagree over which baseball team or city in Ohio is better, they should be able to agree that great golf can be found at the Golf Club of Estrella. Designed by Jack Nicklaus II in 1999 and part of the Nicklaus Design family, the 18-hole par-72 course runs 7,139 yards from the back tees. Here’s to hoping that fans of rival teams can put their differences aside and tee it up at Estrella. Prices range from $45-159.

Nicklaus Design and GOLF.com are operated by the same holding company, 8AM Golf.