Northern Trust Live Blog: Live updates from Round 1 at Ridgewood 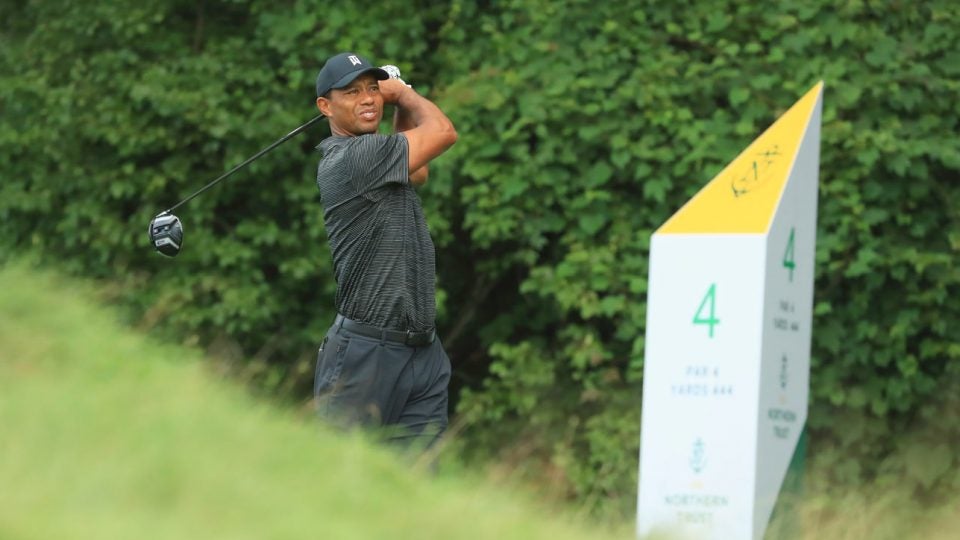 Follow Tiger Woods in the first round of the 2018 Northern Trust with our Live Blog below.
Getty Images

The 2018 FedEx Cup Playoffs are underway at Ridgewood Country Club in New Jersey. We are tracking all of the action below with our Northern Trust Live Blog.

Tiger Woods is back in action this week, looking to put another FedEx Cup trophy on his shelf. It has been a long time since Woods has competed in the FedEx Cup Playoffs. Because of that, lots of attention will be trained on him at the Northern Trust.

But all of the game’s best players are out in force at Ridgewood. The last thing they want to do is let Tiger back into the winner’s circle.

12:45. Thanks for following along today, folks! A bit of a medium morning for Tiger Woods. On a day with plenty of low scores, Tiger’s wasn’t among them. Not out of the tournament by any means, but in need of some more birdies on Friday and Saturday to get into contention.

12:30. That’s a great final iron of the day for Woods. Lands just on the right edge of the green and feeds towards the hole. That’ll be a good look for birdie from inside 15 feet.

12:23. Nice putt from Woods there. Plenty of pace on the left-to-righter and it caught the top lip before falling in. How ’bout this: Tiger will have the tee! Hasn’t happened much today, but he regains honors after a Fleetwood bogey.

12:19. Woods doesn’t quite get that one to the pin but sends it up to some seven or eight feet. He’ll have that left for par.

12:15. With a mighty lash from the rough, Woods hacks it up just short and right of the green. He’ll be somewhat shortsided with his chip; he’s hoping to get this up-and-down to stay at even.

12:09. Tiger just misses the 7th fairway, but his tee shot finds the left rough. It’ll be a longer hole from there with some 190 yards remaining.

11:52. Low and left with that par effort. Not good, and it’s back to even par for Woods. He’s now six shots off leader Jamie Lovemark.

11:48. Woods plays a bit of a chunk-and-run with that bunker shot, but it doesn’t quite have enough run. 10 feet left for his par.

11:45. Woods dumps that approach in the front right bunker. Feels like we’re losing steam a little bit, doesn’t it?

11:36. Woods actually still has just over 5 feet, downhill with some break. No problem, though. Woods walks it in.

11:34. Smokes that putt past the hole and will have some four feet left for par. Whoops!

11:30. Woods’s approach sails over the flag but settles safely in the middle of the green. He’ll have 20 feet for birdie.

11:10. Smokes his second shot down the fairway, landing just short and left of the green. 30-yard chip upcoming.

11:00. Tiger now from 11 feet for par…and it just slides by the left edge. That’ll be the first bogey of the day for Woods and bring him back to level par for the day. Disappointing after a good swing off the tee.

10:57. Bit of an awkward length for a chip from the rough here, especially with it sitting way down. Smoked it well past the hole and will have 10-plus feet left for par.

10:55. Tiger from 193 at the par-3 2nd…and he flies it just over the flag. Trickles into the rough just beyond the green. Too bad — that one looked flagged.

10:53. Goodness me, we’ve got seven players at four under! That’s a logjam, folks. Koepka, Fleetwood and Hideki headline that group, and make it clear that we’ll see plenty of good scores today. Will anyone go really low, though?

10:47. Looked tough until he hit the shot. Nice flop from the rough that trickles down inside two feet. Looks like another par.

10:45. From just 113 yards, Tiger flies the back of the green into the rough. Could be a touchy up and down from there…not a good shot.

10:40. No. 1 at Ridgewood is a 380-yard par 4. Any club will do off the tee; Tommy Fleetwood hits a hook 3-wood into the left rough and Leishman opts for a blocked 3-wood to the right. Tiger splits the difference with a 5-wood that finds the center of the fairway.

10:30. Woods leaves his putt some three feet short, but cleans that one up for par. Now to the front nine — one under through 10.

10:26. Tiger is forced to his a huge hook but his ball ends up pin-high on the right edge of the green. Solid shot to 30 or so feet.

10:25. Some excitement in the group behind Tiger: Brooks Koepka poured in an eagle putt from range, while DJ is on his way to a triple after losing his tee shot. Brooks to -4, DJ back to -1.

10:16. He’s on the board! Birdie for Woods at 17. For you math whizzes, that’s the conclusion of his first nine (He started on No. 9). But still one hole on his back nine. Whatever you make of that, Woods is one under with nine holes to play.

10:12. Nifty chip from Tiger there. Skips it ten feet short of the flag and it zips to a stop some three feet past the hole. Should be his first non-par of the day.

10:08. Elsewhere on the course, fellas are off to SIZZLING starts. Hideki Matsuyama leads at five under through 12. Kevin Tway, Andrew Putnam and Dustin Johnson are one shot back. Soft greens and red scores…

10:05. Roasted 3-wood from the fairway there, and hit it straight — normal day that would have gotten all the way there. Instead it sticks in the fairway, should be 30 or so yards left to the pin.

10:00. Okay folks, Dylan Dethier here taking over at the top of the hour! Let’s settle in and see if Tiger makes some non-pars. It’s a bit of a level scorecard thus far without a bogey or birdie. He finds the edge of the fairway with driver at No. 17. He flew that one about 300 but he’ll still have 290 to get to the hole…not much roll on these fairways today.

9:57: And the putt slides by on the right. For those keeping score (and everyone keeps score) that’s eight straight pars for Tiger to start his tournament.

9:55: Officially, Tiger has 11 feet for birdie. We keep it official here at GOLF.com. He’s lining it up now.

9:51: Woods smooths a short iron up the hill…and it sticks about 15 feet below the hole. Nice little shot there. Another birdie chance coming up. He just hasn’t made one yet.

9:43: Woods for birdie…up the hill..and it just ran out of steam at the end. Another safe, two-putt par. That’s seven straight pars for Tiger to start his round.

9:36: The 15th is a 142-yard par 3. Fleetwood is -2 and has snagged honors in the group. Woods, hitting last, pures a short iron safely aboard, looks like about 20 feet for his first birdie of the day.

9:30: Tiger’s loooooong lag putt scales the hill and settles about 3 feet away. Really nice putt there. He’ll have that for another par.

9:14: Woods’s putt from 23 feet … down the hill…and it burns the edge. He taps for a fifth straight par to start his event. Nothing wrong with that.

9:01: Leaderboard update: After putting all of the golf world on #54watch, Lovemark has made four straight pars. He’s three under through 7 and tied for the lead with Hideki Matsuyama. #54Watch is now cancelled, but hey, it was fun while it lasted, wasn’t it?

8:54: Woods gets it down in two save his par. He’s even through his first four holes.

8:47: Woods from 100 yards, up the hill…not his best shot. A little left and short of the stick, and it spins and zips backward, a good 50 feet from the cup.

8:33: On the par-3 11, 219 yards…Woods goes flag-hunting! It flies the stick and stops about 6 feet above the hole. Just an absolute dart. He’ll have that for his first birdie of the day.

8:26: Woods is staying with that new(ish) TalyMade mallet putt this week, and he pours in the par saver. He’ll head to 11 even through two holes.

8:21: Woods plays a little chip and run from the fairway .. and it comes up about 8 feet short. Damp fairways, soft green, thick rough…everything is a little heavy this a.m. He has a par-saver putt ahead.

8:18: Woods from 189, deep rough…he takes a swipe and the contact sounds good, but it comes up about 10 yards short of the green. The rough is heavy and damp this morning. Still, Woods is in the fairway, and he’ll have a fairly straight-forward up-and-down to save par.

8:13: Early early early leaderboard update: Lovemark birdies 3 to get to three under. Anyone else want to rev up a #54watch?

8:11: On the par-4 471 yard 10th, Woods takes driver and tried to hit a little fade, but he tugs it left again. He’ll have to play from the deep stuff again. Good angle to the hole from there, but this one will depend on the lie.

8:07: Woods for birdie…it’s an uphill, left-to-right bender..and it just misses on the low side. Still, safe two-putt par to open.

8:01: Leish, Fleetwood and Woods each missed the fairway. Leishman is first, takes a rips and comes up short of the green. Fleetwood is also shot. Tiger’s last — he takes a lash and it settles on the front fringe. He hits the best approach of the group, and that’s been his M.O. this season. Woods ranks 4th on Tour in strokes gain: approaches to the green. He’ll putt from the fringe to open with a birdie. Looks like 15 feet or so.

7:59: Your early, early and I mean EARLY leader? Jamie Lovemark, who’s 2 under through 2. He just has to birdie in from here for the Tour’s first-ever 54.

7:56: Woods, Leishman and Tommy Fleetwood will be our focus this morning. Woods, in a blue shirt, takes driver on the 490-yard par-4 9th (yes, they’re staring on 9) and yanks it into the juicy stuff left of the narrow fairway. Nice little crowd this morning. We’re underway.

7:45: Good morning golf fans! Will kick things off with Woods’s first tee shot at about 7:55 a.m. ET. Grab a cup of coffee and settle in. Should be a fun morning. 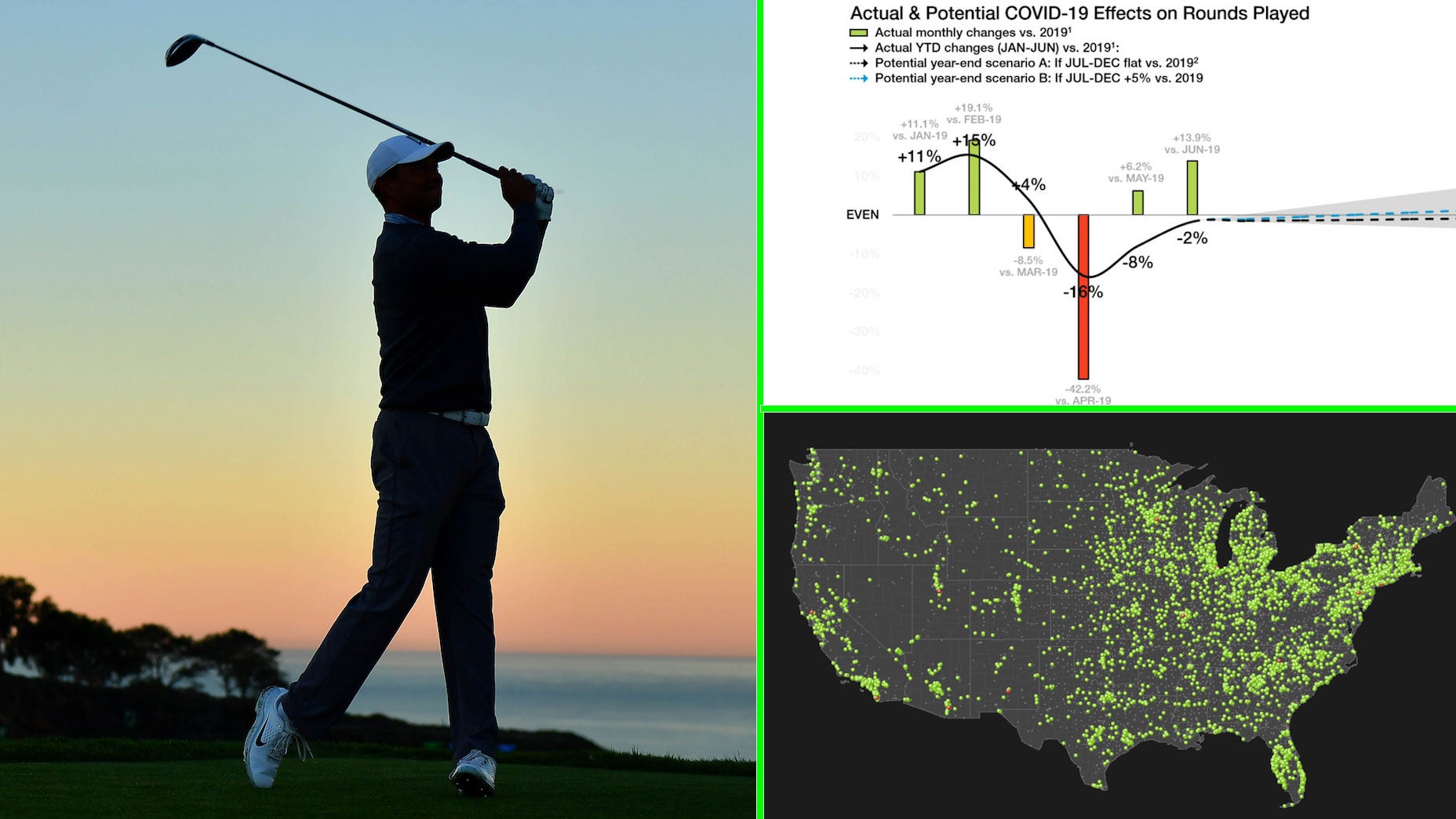 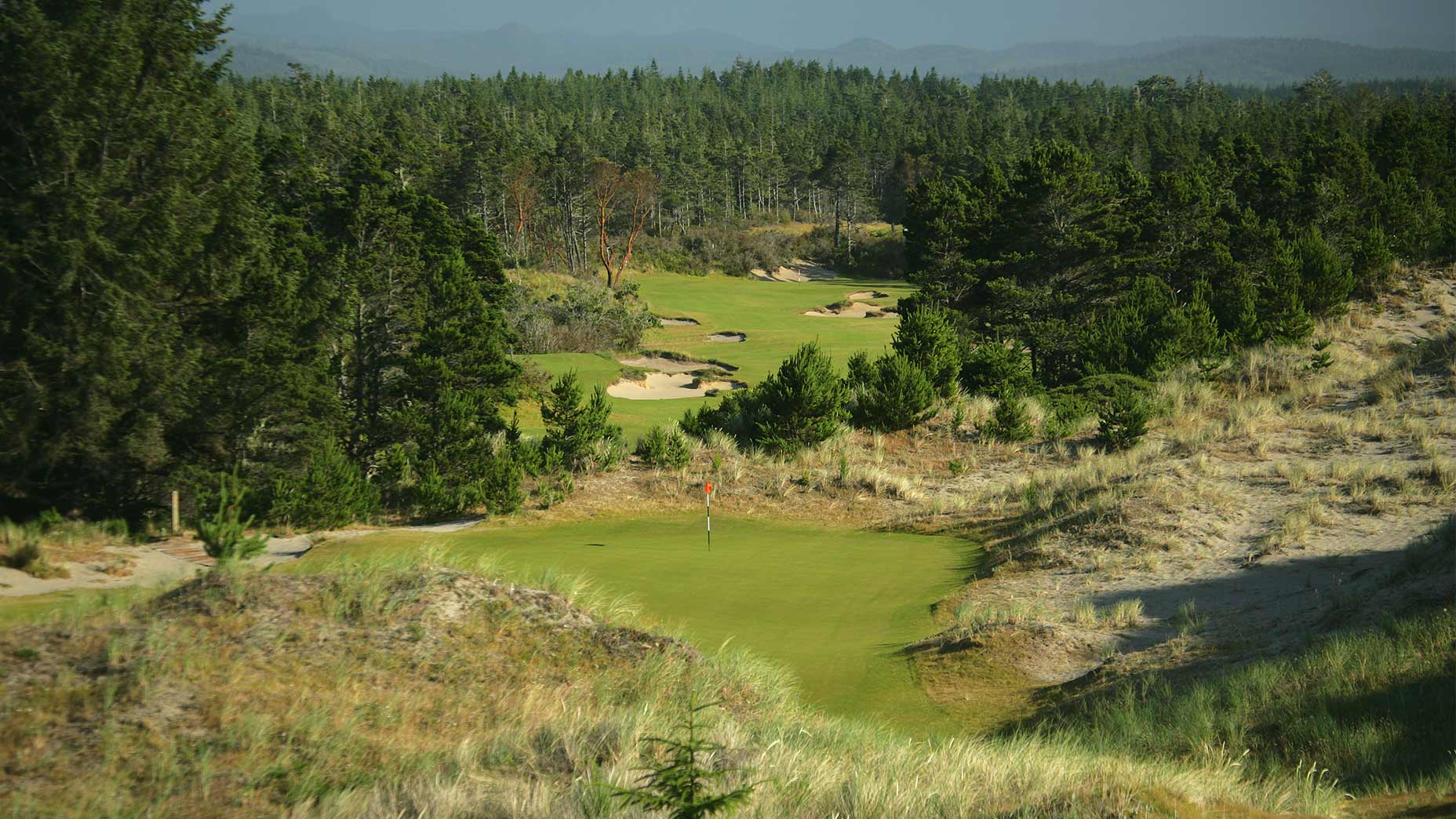 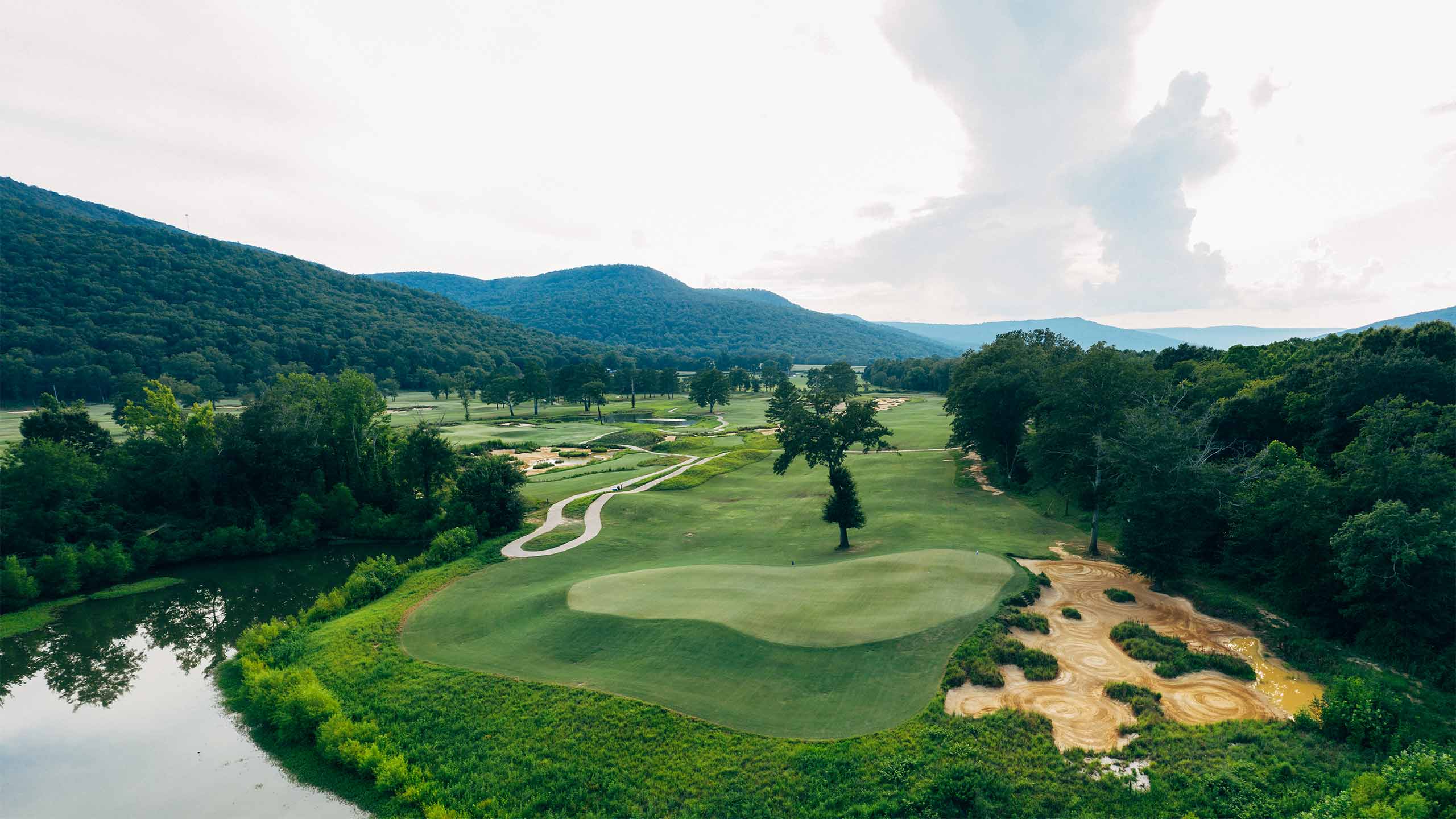