Getting there isn’t easy, but New Zealand is one of few places that exceeds its hype

The muscular, twenty-something dude in a tank top tightened the bungee cord around my lower legs as I sat on a platform 141 feet above the Kawarau River, in Queenstown. It’s where a pair of Kiwi adventurers named A.J. Hackett and Henry van Asch originated commercial bungee jumping, in 1988.

“So, mate, what brings you to New Zealand?” he asked.

“I’m playing some golf courses around the country,” I answered.

“Well,” he said with a smile, “that’s harder than jumping off a bridge, isn’t it?”

Before I could respond, he had me stand up and gingerly shuffle to the platform’s edge. He encouraged me to wave at the spectators watching from dry land on my left. He advised me to focus on another bridge a quarter mile down river. He told me not to look down. But I did. No, golf is much, much easier, my inner voice screamed. And then I jumped. 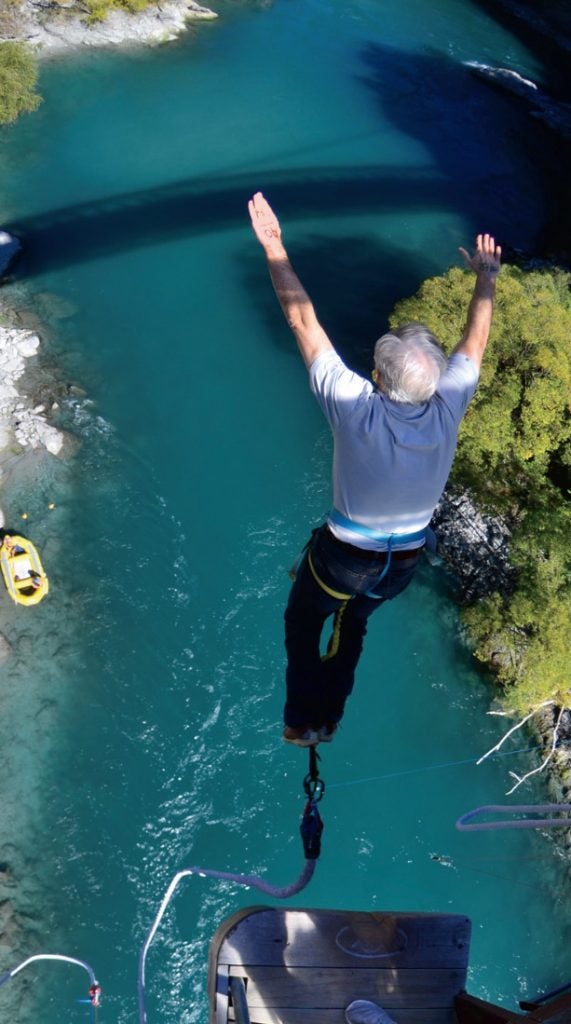 Tell people you’re going to New Zealand and the praise pours in faster than Cam Champ’s downswing. From the country’s many fans, I heard raves about the people, the wine, the scenery, the food, the favorable exchange rate, the opposite seasons, and so on. You must go, they beseech you. You must go.

So I did. Twice in the past two years, to check out the golf landscape. Turns out New Zealand is one of the few places that exceeds the hype. Yes, it’s a hell of a long way to go for golf: 12 hours and change flying nonstop from San Francisco or Los Angeles to Auckland. Longer direct flights depart from Chicago and Houston. You lose a day going, and the jet lag is fierce.

Is the golf really that good? It is. The catch? It’s also really spread out, between the North and South Islands. Here, you’re not getting on a bus with your buddies for a week of 36 a day. Instead, you’ll need to get exceedingly familiar with Air New Zealand’s efficient flight schedule to move around in a timely manner. But the logistics fade away when you find yourself standing on the first tee at Arrowtown Golf Club, just north of Queenstown, on the South Island. Rare is the course layout that begins with a par 3. Even more rare? A course without a single bunker. Arrowtown checks both of these boxes. But it’s much more than its novelties, as I learned playing the low-key track last March with a New Zealand tourism executive named Rene, and with Hojun Sung, a South Korean journalist with his own photographer—Mr. Lee—in tow. 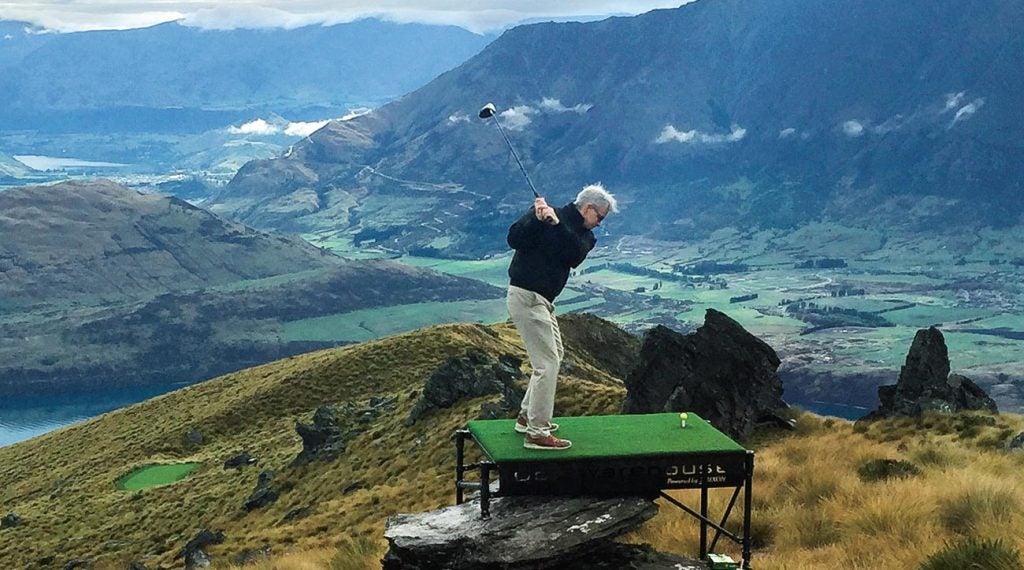 On that elevated first tee, Rene gifted us with one of New Zealand’s natural treasures: a candy bar known as Whittaker’s Peanut Slab. It was hefty and sweet, full of chocolate and peanuts. Given that my breakfast an hour earlier was an “obscenely good” sticky bun from Provisions Café, on Arrowtown’s touristy yet charming main drag, I saved the Slab for later and, while waiting for the green to clear, mentally reviewed the courses I’d already played.

In virtually every way, Arrowtown was the complete opposite of Tara Iti, which, in 2017, debuted at No. 27 on GOLF’s Top 100 Courses in the World list. That private Tom Doak design is a stunning seaside links 90 minutes north of Auckland, on the North Island. It’s fun, unforgettable and an extraordinarily tough tee time. Some select outside play is allowed, but you’ll need approval by the club’s board, then you’ll have to stay on-site in a cottage. The better news? Two public-access courses—one by Bill Coore/Ben Crenshaw, another by Doak—are on the drawing board to be built just south of Tara Iti. 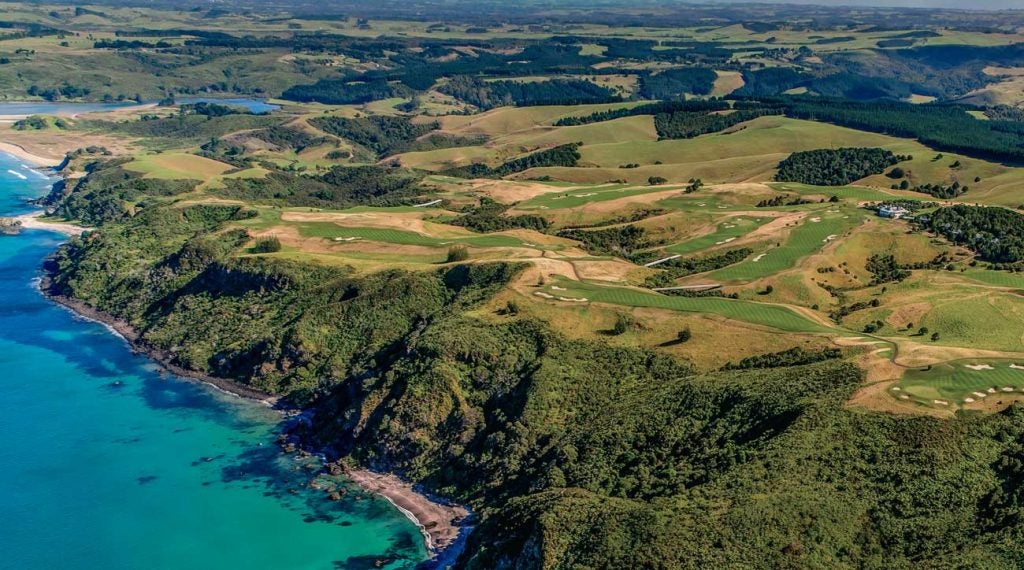 Two high-end North Island options that you can access are Kauri Cliffs and Cape Kidnappers. Both were created by American financier Julian Robertson in the early 2000s, kickstarting the country’s luxury-golf-resort scene. The settings are memorable and the courses are massive. Kauri, located in the northeast region and designed by David Harman, is basically Kapalua meets Pebble Beach—great fun and Instagram worthy. At Cape Kidnappers, just south of the Art Deco–heavy town of Napier in the Hawkes Bay wine-growing region, I felt swallowed up by the vastness of the Doak design. It’s almost too much to digest in one round, and (trust me) a long walk. At both tracks, the accommodations and dining (please, gentlemen, jackets required for dinner) were delightful, and prices are commensurate with the high-end service.

Less formal are two courses north of Wellington, the country’s capital city, at the bottom of the North Island. A 12-time New Zealand Open host, Paraparaumu Beach brings all the funk of a classic Scottish or Irish links layout, with plenty of lumps, bumps and uneven lies. Royal Wellington is a pure parkland experience, with an old school vibe and superb green complexes.

Back at Arrowtown, we all parred the first, then deftly placed our drives on the incredibly narrow fairway on the par-5 second. In lieu of bunkers, the course is dotted with schist, a rock formation that squeezes some landing areas and propels balls at angles I have not seen since high school geometry class. It’s most prevalent on the front nine (built in 1936), where hole names include Nobby Dick, Waterloo and Look Out.

You cross Centennial Avenue to get to the back nine (built in the early 1970s), which unfolds in the shadow of a mountain. Less drama there, but solid holes demanding accuracy rather than distance all the way through. As we waited on the 10th tee, Rene replenished our Peanut Slab supply, while Mr. Sung, who’d struggled a bit around the greens, pulled a flask of whiskey from his golf bag. A healthy sip improved his mood but not his scorecard.

As we played, the 2018 New Zealand Open was being contested just down the road. The country’s national championship, which celebrates its 100th anniversary this month, currently has two, not one, host venues. And a pro-am. It all has to do with corporate sponsorship and funding— not an easy thing to cement for sporting events in this part of the world. Splitting hosting duties were Millbrook Resort (where the final round ended on a par 3) and The Hills, the private playground of a New Zealand jeweler named Michael Hill. That layout—massive in scale, aptly named and in superb condition when I played it a year earlier—is flecked with whimsical pieces from the owner’s private sculpture collection, none more curious than, right of the 18th fairway, a sword-wielding samurai surrounded by 80 wolves. The club allows some visitor play, with a pricey package that includes golf, lunch and wine. The course stands on its own; throw in some fine New Zealand wine and it’s more than worth the splurge. 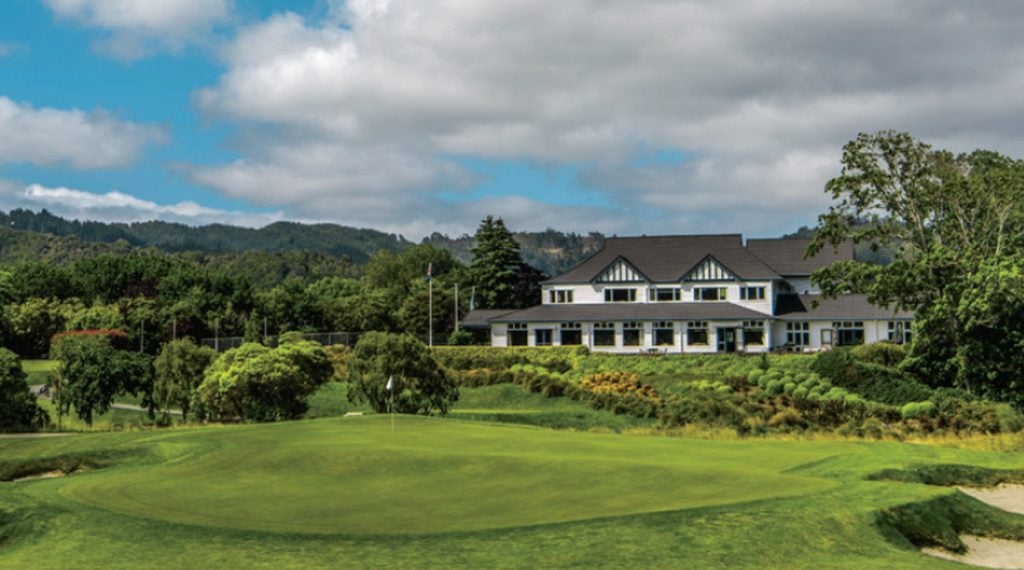 So, too, is a short helicopter ride to the top of Cecil Peak, looming almost 5,000 feet above Queenstown. The ride up there provides a birds-eye view of Jack’s Point, an 18-hole must-play with multiple holes overlooking Lake Wakatipu, the country’s third-largest lake. But it’s a one-holer—part of an “Over the Top” package offered by a local helicopter company—that reduced me a to a giddy child, thanks to its multiple, vertigo-inducing tee boxes and hard-to-believe-its-real panoramic view. Landing a ball on the small, artificial-turf green situated on a rocky ledge 312 yards below is nearly impossible. But trying it was a blast.

At Arrowtown, our group walked off the 18th having carded more laughs than pars and with more than a few schistscruffed golf balls between us. In the clubhouse bar, tall glasses of cold pilsner lined the table. Even the heretofore taciturn Mr. Lee couldn’t stop smiling. “Beautiful course,” he said, in Korean. “Beautiful country.”

As for that bungee jump, it was over in four seconds. The falling part, that is. It was the ensuing, upside-down bouncing that got my stomach spinning. Should not have opened my eyes while that was going on. But I did. And all I could think of at that moment was that I’d rather be playing golf. Anywhere.

But especially in New Zealand.