7 best courses you can play on the Monterey Peninsula

With an instantly recognizable layout that has hosted five U.S. Opens (and soon-to-be six), four of Golf Magazine’s Best Public Courses You Can Play in California, and a coastal landscape that will leave you well short of appropriate adjectives, the greater Monterey Peninsula area is a must-see and play for any golfer.

One thing it isn’t though, is cheap. This bucket-list destination comes with an extraordinary price tag. Is it worth a visit? Yes. Plus, you know it’s a winner when the road trip is almost as good as the golf.

The Monterey Peninsula’s staggering scenery starts with the enormous dunes just to the north at Sand City, followed by a crescent of beach and dense forest. The approach from the south, also on State Route 1, is even more dramatic—the slender two-lane highway winds its way between mountains and the headlands above the Pacific, taking you through Big Sur to the famed peninsula.

The centerpiece of it all is 17-Mile Drive, the iconic trail that twists and turns along the coast and through the Del Monte Forest, providing glimpses of multiple courses that you will hopefully be playing, the most famous cypress tree in the world and both tacky and tasteful megamansions. 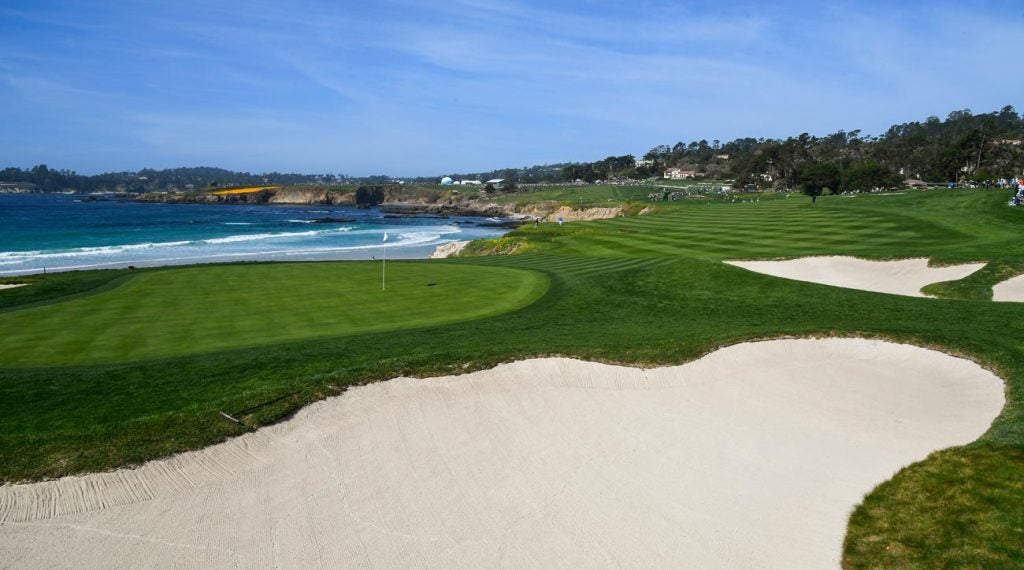 A view from behind the 10th green at Pebble Beach Golf Links.
Getty Images

What’s left to say about a layout ranked No. 1 on Golf Magazine’s Best Courses You Can Play in the U.S. and ninth in Golf Magazine’s Top 100 Courses in the World? The green fee is ridiculously high (plus a minimum $600+ per night hotel room if you want a guaranteed tee time in advance), the pace of play is not the fastest, and the opening hole is a dud.

But the dazzling landscape, the golf history played out on its fairways and greens, and the immeasurable wow factor all place it in the priceless category at least once in any serious golfer’s life. 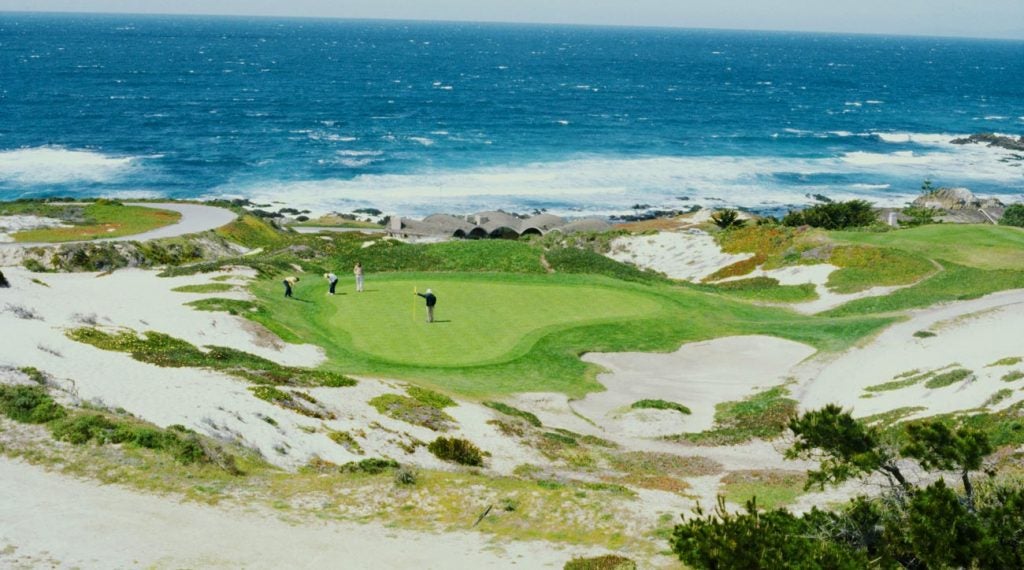 The 3rd hole at Spyglass Hill on the Monterey Peninsula.
Getty Images

Home to arguably the best five opening holes in golf, this Robert Trent Jones Sr. design debuted in 1966 and is ranked among the best public-access courses in the state of California.

Always the toughest course used in the AT&T Pebble Beach Pro-Am, the Spy impresses with sea views, sand dunes and elevation changes on those first five holes, and then challenges you even more on the heavily wooded and less dramatic back nine. 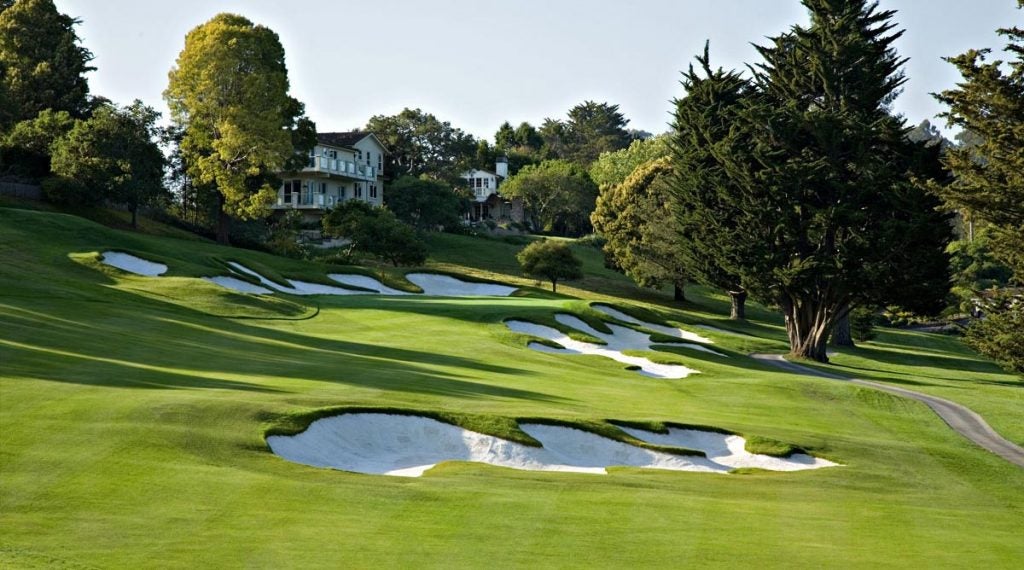 Designed by Dr. Alister MacKenzie in the hills above Santa Cruz, 40 minutes north of Monterey, Pastiempo debuted in 1929 and was restored to its full glory in 2007 by Tom Doak.

From a view of Monterey Bay and the Santa Cruz boardwalk on the opening tee to the closing par-3 18th, this 6,500-yard course repels every attack with rolling terrain crisscrossed by barrancas, lots of bold bunkers and nightmarishly quick greens.

Par-4s form the meat of this meal. Pasatimepo has also been home to Hall of Famer Juli Inkster, who grew up in a house on the 14th fairway, and MacKenzie, who spent the last years of his life living in a home overlooking the sixth fairway.

The Links at Spanish Bay 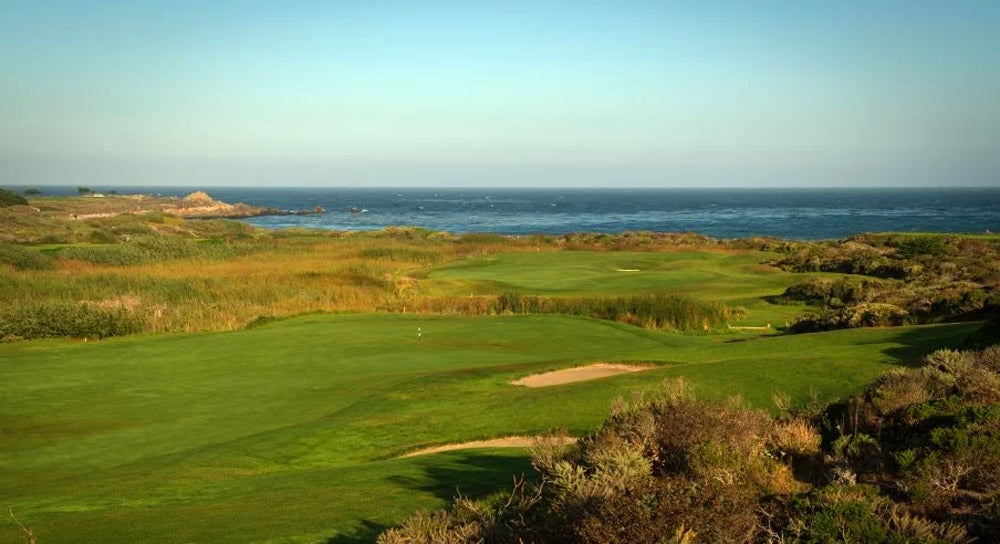 The 4th hole at The Links at Spanish bay
peblebeach.com

A superb opening par-5 sets the pace; the green affords a panorama of Spanish Bay. Purists say there are too many woods, wetlands and forced carries to call it a true links, but with the breeze, the firm turf and a bagpiper sounding his tune along the first fairway at dusk, this could pass for Scotland—except that the Scots never had it so cushy.

The Bayonet course at Bayonet Black Horse has benefited greatly from a complete renovation in 2008.

Originally designed in 1954 on what was then the Fort Ord military base by a U.S. Army General (a lefthander, which reportedly explains an abundance of dogleg lefts on the back nine) Bayonet’s tight fairways make it the toughest track in the area. Stay and play packages are available with multiple local hotels.

A decade younger than the adjacent Bayonet course, Black Horse is a bit less sturdy but also much improved after a thorough renovation that included the creation of a brand new par-3 (the 15th) on the back nine.

After experiencing sticker shock at the prices around Monterey, calm your blood pressure amid the massive sand ridges at Pacific Grove Golf Links (pggolflinks.com, 831-648-5775, $40-$74) just outside the gates of 17-Mile Drive.

You can walk it for a discount, enjoy all the back nine ocean views you want, and play past the oldest continually operating lighthouse on the West Coast at the 16th.

There’s not much length at this 5,727-yard, par-70 course (it opens with back-to-back par 3s), and the parkland front nine won’t register five minutes after you’re done with it, but the back nine mimics a seaside British Isles experience as closely as any course that you’ll find in the United States.

Can Pebble Beach possibly be worth the $550 walk-on rate? Let’s be fair: Some can handle the tariff a little easier than others. The better question is, if you would pay $175 for a fabulous special occasion course, or when you’re on vacation, is it worth triple the fees to play Pebble?

The answer in terms of scenery, history and tradition and challenge is a resounding yes.

For conditioning, that could go either way. On the one hand, you’d expect perfection for that price—but that’s not what you get. On the other hand, it’s much better than it used to be and continues to improve.

As to pace of play, let’s just say that Pebble’s rangers do endeavor to move things along, but play is generally on the slow side. The main culprit is the cartpath-only policy, which forces cart riders to haul a variety of clubs back and forth, often with challenges just locating your ball in the lush rough.

Our advice: Take a caddie and walk. The plus side to slow play at Pebble? It’s Pebble. Look around at the best scenery in creation. As far as the actual architecture goes, Pebble Beach is a mixed bag. It possesses some of the greatest holes ever designed, but is also home to a few indifferent holes, such as the 11th and 12th, and a few quirky greens, such as those at the 14 and 17.

The ultimate verdict: Would we give up three rounds at one of those gorgeous, if cookie-cutter, 7,400-yard modern layouts that sport ridiculously wide fairways and predictable shotmaking options for one round at Pebble?

Yes, we would. Life is short. Pebble Beach is worth it.

A perennial Golf Magazine Platinum Premier Resort, Pebble Beach is an extraordinary splurge, with room prices starting at $940 for The Lodge (overlooking Pebble Beach Golf Links) and $820 for The Inn at Spanish Bay. If you can’t swing those rates, at least make time for a drink or bite to eat in the Lodge’s famed Tap Room (visit in between meal hours for better access to all the golf memorabilia on the walls). Or enjoy a drink and take in a memorable sunset while standing around the fire pits on the back patio at Spanish Bay.