Meet the newcomers, movers and shakers on our Top 100 list

Eleven courses entered or rejoined our Top 100 World ranking. Just as impressive are six serious climbers — courses that shot up the list faster than a Mickelson flop. Welcome the newbies and the newly noteworthy.

Founding a private club in a remote destination is not without peril, and it’s reasonable to expect a club to take a bit to get its feet underneath it. Now in its second decade, and courtesy of a new greenskeeper, Ballyneal enjoys its best playing conditions since opening in 2006. That manifests itself the closer one gets to the hole. With the greens now stimping in the 10-to-10.5 range, balls are releasing across the rumpled ground and players are delighting in finding creative ways to use banks and Punchbowl features to work their balls in close. Fescue fairways help the ground game options flourish.

NEWCOMER: BANDON TRAILS
UNRANKED TO NO. 87

Several of Coore and Crenshaw’s finest designs are located at hard-to-access private clubs, but many of their works are available to the public, courtesy oftentimes of Mike Keiser. Trails is one of their best, public or private. And the fact that you don’t miss the sight of the water for most of the round speaks volumes of its design quality.

HOW WE RANK THE TOP 100 COURSES 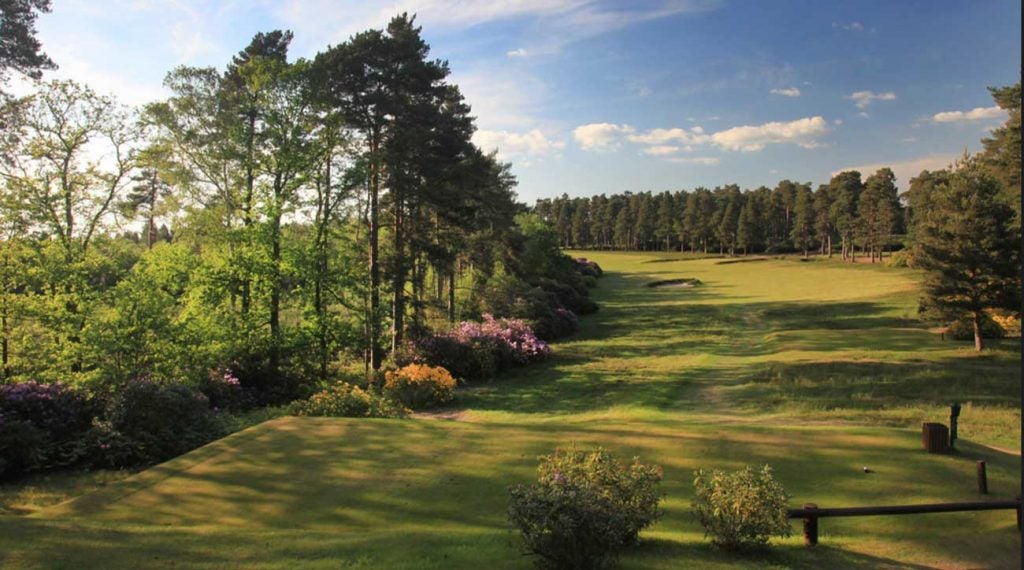 Swinley Forest moved up to No. 55.
Gary Lisbon

MOVER: CALIFORNIA CLUB OF SAN FRANCISCO
UP 23 SPOTS TO NO. 50

Firm playing surfaces elevate any design, but add in a great layout and wind and you have the makings of a World Top 50 course. The difficult decision to shut down the Cal Club in 2007, have 5,000 truckloads of sand hauled in and rebuild it from several feet underground has proved to be a runaway success.

Modern architecture did itself no favors by pursuing holes that constantly scream at the golfer, as at some point the golfer goes tonedeaf. H.S. Colt never went down that path, and he achieves the highest possible result here in that he produced a course that would be a delight to play every day. De Pan doesn’t have the topography of Colt’s St. George’s Hill, but what it does have are sand dunes sprinkled throughout the property. It’s no surprise that as a master router, the architect incorporated them into the holes in every possible manner.

Some critics sniff that hosting a major unduly elevates the ranking of a course. Is that true for Myopia Hunt, given that it has fielded four U.S. Opens? Probably not, as its last one was in 1908! What elevates it is Gil Hanse’s ongoing reno, whereby trees have come down, allowing for the fairways to be reconnected to H.C. Leeds’ famous bunkers. With the wind again evident and the playing surfaces firm, the course’s thorny attributes are once again on full display and help to explain why the winning score averaged nearly 324 (or 81 strokes per round) over its four national championships.

HERE ARE THE WORLD TOP 100 COURSES YOU CAN PLAY 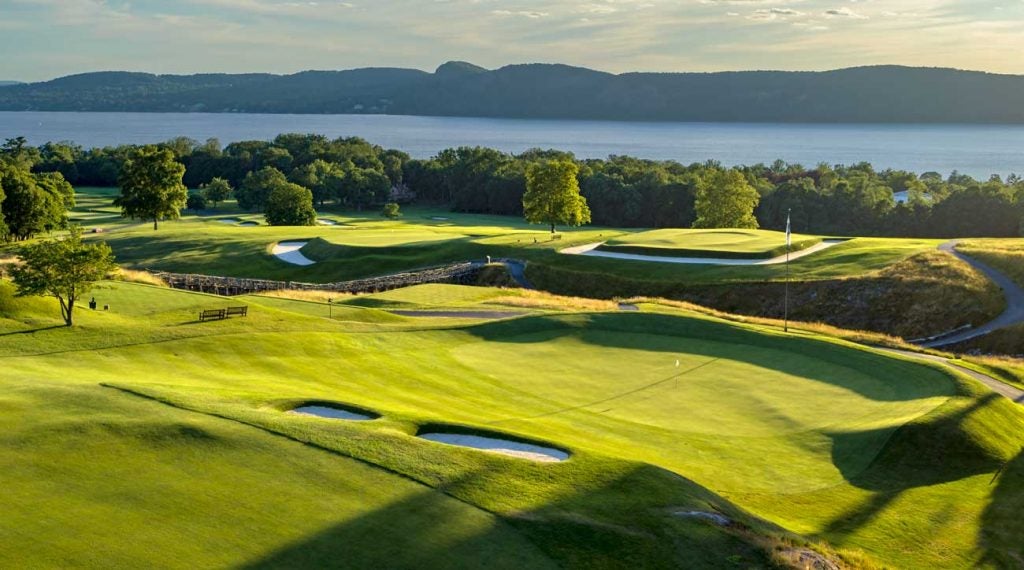 An aerial view of Sleepy Hollow's punchbowl on the 15th.
Evan Schiller

With Ohoopee, set just east of its namesake river in Georgia, Gil Hanse finally got a dream site upon which to build an original design. Sand had accumulated there for centuries. Hanse’s own sense of aesthetics perfectly complement the rustic locale’s color palette of browns, rusts and tans. When your caddie tells you to land it 30 yards short of the 6th green and let the ball scamper on, you know you’ve found a dream merger of playing conditions and design.

NEWCOMER: PEACHTREE
UNRANKED TO NO. 91

Though his Valderrama in Spain dropped off our list, Robert Trent Jones Sr.’s work is still represented with the return of Peachtree. Built in the late 1940s, this design came prior to Jones being tarred with Oakland Hills’ “monster” brush. Here, we even find a Punchbowl green (at the 10th) and a host of imaginative green contours. This Georgia course remains true to its founding vision better than another famous course in the state.

Prestwick joined our list in 2017 at No. 100, and though it has vaulted higher, not much has changed at the 168-year-old Scottish gem. By embracing its history, the club has preserved Prestwick’s best and most quirky features, including the sleepered Cardinal bunker, the blind tee shot on the par-3 5th and the descriptively accurate “Narrows” hole (No. 15) with its ribbon-wide fairway. At seemingly every turn you’ll find something that you’ve never seen before on a golf course. That’s what every well-traveled golfer yearns for.

A DEEP DIVE INTO THE WORLD TOP 100 RANKING 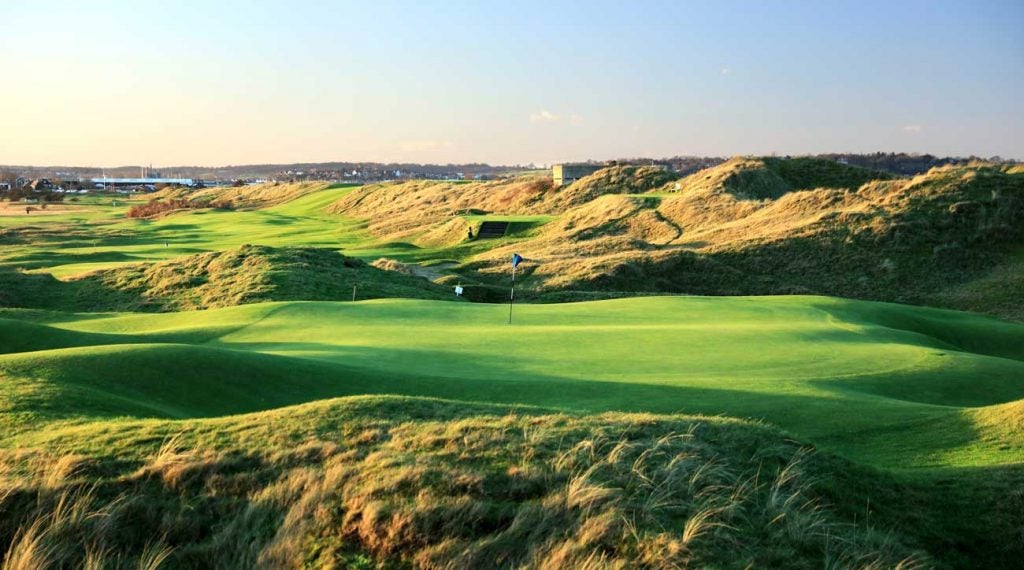 Plenty of Doak coastal designs crowd into the World Top 50. This American West setting is quite different from those sandy ones, and the build process on the rocky Montana site was intense. Nonetheless, the result enjoys the same great elements: sloping fairway lies, playing angles galore, convoluted greens and a strong sense of place.

Ever confident in his own work, Alister Mac- Kenzie was quick to praise the talent of others. In the United States, he considered Perry Maxwell to be as gifted as anyone, and in Australia his man was Alex Russell. Another of Russell’s creations, Paraparaumu Beach in New Zealand, just missed out inclusion on this year’s list, but the panel’s appreciation of the East Course raises the question: What is the best 36-hole day of golf in one place? Winged Foot, Cabot, Bandon, Sunningdale or here?

The opener is the easiest hole (and the course’s only three-shotter) and then … hold on! What follows are 12 two-shotters (10 of which measure over 420 yards) and a famously diabolical group of five one-shotters that have this 6,503- yard course weighing in, yard for yard, as one of the most difficult on our list. The fact that you can walk it in two and a half hours makes you question the merit of courses that are so much longer. 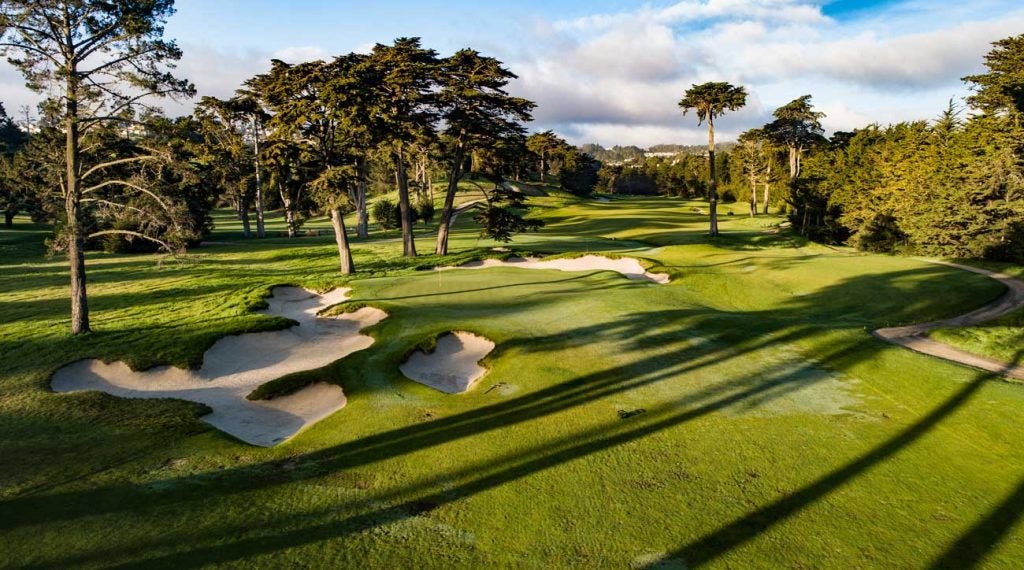 The California Club of San Francisco is now ranked No. 50.

NEWCOMER: SLEEPY HOLLOW
UNRANKED TO NO. 76

This Westchester County, New York, course has always enjoyed a spectacular component to it, courtesy of breathtaking views of the Hudson River. What it never enjoyed was playing interest 50 yards and in to the greens. That changed in 2016 when Gil Hanse embarked on a two-year project to imbue the greens with a C.B. Macdonald flair that, well, even Macdonald would appreciate.

A club has a fundamental duty to act as a custodian to its course. And when the course is on special land, built in the Golden Age by one of the masters, then that responsibility is especially acute. How to go about restoring a classic is a topic that will be explored in coming issues. Somerset Hills’ approach has been slow and methodical, stretching back to the 1990s. Thanks to a meticulous attention to detail, the century-old course now joins Winged Foot (West and East courses) and San Francisco GC as exemplars of A.W. Tillinghast’s enormous design talent.

This Perry Maxwell design was once shrouded in trees, which obscured a proper appreciation of its wonderful landforms and creeks. Now golfers debate which is better: Maxwell’s greens, or how he laid the holes across the rolling topography. Add the two together and you have one of America’s best parkland courses. 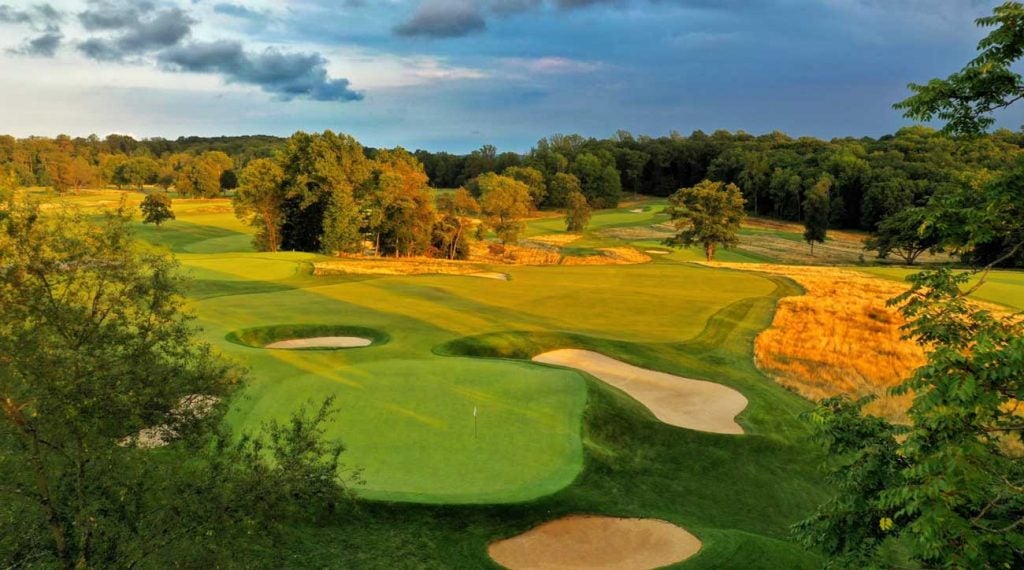 From London’s heathland to the cliffs of Northern Ireland to sandy spots in the Netherlands, H.S. Colt enjoyed many fine sites in Europe over his extended career. One of the best is here, in Weybridge, England, where Colt teased a diverse collection of holes from the rolling landscape. His placement of the green sites—some on knobs or plateaus, some at ground level and the magnificent 10th green at the hole’s low point beyond a hillock—define the challenge.

Unlike in the U.S., England doesn’t have a phobia about courses with par under 70. Seeing a 6,431- yard, par-69 course like Swinley be embraced as the epitome of great design is a powerful message. Like Rye, its quintet of one-shotters and sub-70 par make it more of a complete test than a glance at its scorecard might indicate. Least bad indeed, and the more the world speeds up, the more people seem to appreciate clubs like Swinley, where calm reigns supreme.

NEWCOMER: YALE
UNRANKED TO NO. 83

A herculean effort by Seth Raynor to build, Yale embodies the maxim that a world-class course must possess — you guessed it — world-class holes. There are plenty to pick from here, including the 1st, 4th, 8th, 10th and the love-it-or- hate-it 18th, but the hole everyone needs to see at least once in their life is the famous downhill Biarritz 9th. Who knew inland golf could be this exciting?