Itâ€™s unlike most tournaments youâ€™ve covered,â€ Brian Katrek said, ignoring the steam venting from a faux-rock volcano and the cars whizzing by on Route 17. Katrek, the lead announcer for the PGA Tour Network, was showing me around Hawaiian Rumble, the Augusta National of miniature golf. â€œYouâ€™re playing the ball off bricks on three-quarters of the holes,â€ he was saying — but he was interrupted by a passing mini golf pro discomfited by the luau ambience. â€œCan you tell them to put on the Jimmy Buffett music?â€ the fellow asked. â€œThatâ€™s what Iâ€™m used to.â€

So, yeah, a tradition unlike any other.

This was a few weeks ago, on a sunny, breezy morning in North Myrtle Beach, a golf-and-sandcastle destination on South Carolinaâ€™s Grand Strand. Katrek and I were there to cover the $12,000 U.S. ProMiniGolf Association Masterâ€™s, but the radio man — a scratch golfer who has played in the U.S. Mid-Am — was competing as well. â€œItâ€™s not a joke,â€ he said of the 65-member USPMGA. â€œIâ€™m a pretty good putter, and they just kick my ass. I donâ€™t know how Kevin Na would do out here, but I donâ€™t think heâ€™d win.â€

Jordan Spieth himself might have a hard time against two-time Masterâ€™s champ Olivia Prokopova, a pigtailed 20-year-old from the Czech Republic who has been putting competitively since she was five; or 2005 and ’06 champ Hans Olafsson, a cross-handed-putting Swede with a stroke so languid that the shaft passes his belt buckle on the follow-through; or broomstick-wielding Matt Male, a 31-year-old pro from Columbus, Ohio, who smiled when a fan shouted â€œWay to go, Keegan!â€ after one of his many aces.

Pro mini golfers, Iâ€™m happy to report, donâ€™t waste time on plumb-bobbing or visualization; they rely on to-the-inch hole notes with aiming points labeled â€œblue stain on middle brickâ€ or â€œjust left of cigarette burn.â€ They seem equally indifferent to putting fundamentals, stroking their putts with cockeyed stances and a blithe disregard for the laws of physics. North Carolinaâ€™s Matt McCaslin, for instance, putts off the hosel of his Bulls Eye blade. I saw another contestant take three frantic practice strokes, each strong enough to whack the ball 50 yards, before tapping in for par. 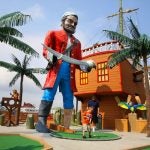 You may also like America’s Craziest Mini Golf Courses

Pace of play doesnâ€™t seem to be an issue. The slowest Hawaiian Rumble twosomes completed an 18-hole round in under 45 minutes. The best putters broke 30 with some regularity. That blew my mind until Brian reminded me that miniature golf holes donâ€™t have multiple pin placements. â€œOnce youâ€™ve got the line and the speed, youâ€™re good,â€ he said. â€œThe hole isnâ€™t gonna move.â€

Wanting to know more about pro mini golf, I went to the thatch-roofed golf shack and introduced myself to Hawaiian Rumble owner and USPMGA president Bob Detwiler. Wearing sunglasses and dressed from head to toe in black, Detwiler had a military bearing and was, as Brian had promised, â€œa fount of intentional and unintentional humor.â€ I found him to be delightfully quirky, as befits a man who can make a volcano erupt with the push of a button. I wondered, though, after studying the USPMGAâ€™s map-and-flag logo, if the officers of a certain golf club in Georgia were amused.

â€œWhen they saw it, they said it was awfully close to theirs,â€ Detwiler said, referring to that certain club and a Charlotte law firm specializing in cease-and-desist orders. â€œSo I changed the font.â€ Detwiler went on to morph the map (itâ€™s South Carolina now), add an apostrophe (Masterâ€™s) and take the extra step of awarding his champions a green windbreaker instead of a green jacket.

So, Billy Payne, if youâ€™re reading this — itâ€™s all cool.

A few words about temperament. Unlike their PGA Tour counterparts, who back off a shot if a squirrel should so much as sneeze in a treetop, the Myrtle Beachers seemed laid back. They maintained their equanimity with camera crews breathing down their necks, spectators hopping over blue-dyed streams and caged cockatoos shrieking during their backswings. It wasnâ€™t until the final rounds, on Day 3, that the pressures of competition began to show. One pro snapped his putter over his knee. Another took an angry swing at some gravel and then spent the lunch hour alone in his car. â€œIt can get intense,â€ Detwiler said, watching a tearful Prokopova huddle with her Czech entourage after a T-6 finish.

The best emoter was Matt McCaslin, brother of defending champ Danny McCaslin. Leaving an ace attempt inches short near the end of his 10th round, McCaslin dropped his putter and began banging his forehead on the trunk of a palm tree, wailing, â€œWhy? Why? Why? Just get it there, Matt, you f—— weasel!â€ Pressing his hands to his ears, he looked skyward and shouted. â€œArgggghhh!!!â€

McCaslinâ€™s shoulders slumped as he turned to the handful of us watching from a tiny grandstand. â€œThis game is not frustrating,â€ he said, his voice dripping with irony.

The winner of $4,000 and the green windbreaker, Iâ€™m obliged to report, was Matt Male, the aforementioned practitioner of anchored putting. Male, who handles client correspondence for J.P Morgan Chase & Co., shot 72-under par for 12 rounds, 29.92 strokes per round — the first sub-30 average in tournament history. Male, who employs the long putter because of a dodgy back, looked relieved to have survived a final-round charge by McCaslin, who finished a stroke behind. â€œYesterday was what won it for me,â€ the champion said. â€œI was able to be â€˜cleanâ€™ — no threes, no bogeys. I answered the bell every time.â€

So did Brian Katrek, who, despite getting his ass kicked by the pros, was low amateur by 60 strokes.