Go North! Giants Ridge lives up to the hype, and then some 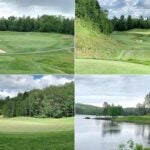 When I relocated from NYC to Minnesota last year, it meant I had the ability to play significant golf in my home state for the first time in seven years. But what courses needed to be on my must-play list? I decided to ask the good people of Twitter.

I was familiar with most of the top in-state options, but I wanted to make sure I wasn’t missing anything. So out went my tweet, and in came more than 100(!) responses. I was blown away by the feedback, and I’ve even checked that thread several times in the past few months looking for new ideas.

But of all the submissions, one resort seemed to pop up more often than the others: Giants Ridge.

I’d heard of Giants Ridge. I heard it was good and I’d heard it was worth the trip, but I’d never actually been there. It’s a decent drive from the Twin Cities, so for whatever reason I had yet to check it off my list. But then came June, and my inaugural trip to Biwabik, Minn., for 57 holes at Giants Ridge’s two courses. (Why, 57, you ask? Well, someone had to buy dinner, so one night included three playoff holes.) What did I learn? Lots. But more than anything — believe the hype.

1. Giants Ridge is about a three-hour drive from the Twin Cities and just over an hour from Duluth, Minn. The Iron Range resort was already a winter destination for skiing and snowboarding, but it wanted to be bigger, and year-round. That’s when Jeff Brauer was brought in. Brauer — with consulting help from Lanny Wadkins — unveiled The Legend course in 1997. The Quarry, also a Brauer design, came six years later, giving Giants Ridge a superb one-two punch for golf-hungry travelers, perhaps the best public combo in the state.

2. The Quarry is 68th on GOLF’s Top 100 Courses You Can Play ranking and the only Minnesota course to make the most recent list. But The Quarry is more than just good, it’s a bargain. When GOLF released its first-ever Top 100 Value Courses in the U.S. ranking a few months ago (the best courses you can play for $150 or less), the Quarry ranked 9th in the entire country. At $79-109, depending on the time of year, it’s an absolute steal. (Check out rates for both courses here.)

3. Building the two courses was far from easy, though. It’s the Northwoods, meaning — yes, you guessed it — it’s wooded nearly everywhere. It’s also filled with sensitive environmental areas, so creating approved routings was a laborious task. The Quarry, true to its name, was carved into an old sand, gravel and iron ore mining site. The Legend is at the main lodge, while The Quarry is located just a couple of miles down the road.

4. Giants Ridge has lodging on site and some other options down the road, closer to The Quarry. It’s logical to stay, since it can be a bit of a drive depending on your location, but they offer great 36-hole deals, too. One from this past summer: 36 holes, plus lunch in between, for $160 during the week and $175 on the weekend. There are a few different restaurant options on site, and the cozy town of Biwabik has some solid local eateries as well. On property, though, The Sleeping Giant Restaurant & Bar, located at the main lodge, was our go-to stop. It’s everything you’d want in a 19th hole — a casual no-frills pub with pool, darts and good drinks; the ideal atmosphere for explaining to your buddies why that 7 on the 4th hole was oh-so close to actually being a 4. (Pro tip: even if the kitchen is closed, ask a bartender if they can toss in one of their pizzas for you. That’s what they did on one of our late nights, and we’re still forever grateful.)

5. Bring a swimsuit! I didn’t, and I regretted it. There’s a pool and huge hot tub on site, which would have been the perfect spot to relax after 36 holes.

6. OK, back to the golf. Two courses, right? Right. Everyone has their preference, and here’s mine. The Quarry, I thought, was the better course, yet I had more fun on The Legend, which is more open, more forgiving and more in front of you. High-handicappers, like this 15 handicap, are more likely to fire a better score at The Legend, and the better golf I play the more fun I have. The Quarry had my favorite hole (the 13th), but the Legend had three others I loved (the 3rd, 11th and 17th). You’ll most certainly shoot a better round your second time playing The Quarry, which might be true with any course but definitely here. There’s a good amount of strategic play that goes into it, with blind shots, several ways to attack holes and plenty of green-side mounding that can help feed balls to certain pins. The greens are big and undulating and missing in the wrong spots is bad news.

Here’s John Kendall, the Director of Golf at Giants Ridge, explaining the difference between the two courses: “The Legend course here is a more traditional Northwoods golf course, where there’s a little wider corridor for players, more rough on each side, more traditional style of architecture,” he said. “There’s no blind shots, you can see every fairway from the tee. Down at The Quarry it’s a little more modern golf course. It fits the rugged, industrial history of that site, and it’s more a golf course that requires some strategy. It’s not just what you see in front of you.”

7. My favorite Quarry holes: After a somewhat easy opener, the par-5 2nd is a great introduction to what you’ll get the rest of the round. The 2nd fairway splits for your second shot, and an opening through the trees will tempt the longest hitters to go for the green in two. The green is massive and everything right will kick left. The 7th is a fantastic downhill par-3 over a waste area to a wide green. The 10th is a short par-4 that will tempt you to hit driver at the green, but you need to clear a pond in the process. If you can take the shortcut, it’s an ideal angle in and only a flip wedge. The 10th is also the start of a dynamite stretch of par-4s. The 12th is a longer par-4 but plays slightly downhill to a massive, bunker-less green, and the 13th is often considered the best hole on the property. The tee shot ranges between 275 to 323 yards with a small bunker splitting the fairway 100 yards out from the green.

The 13th tee shot is downhill but the green — the biggest at Giants Ridge — is elevated and the front is guarded by thick rough, save for a sliver of a mowed path down the middle. From the tee, you can lay up behind the bunker or to either side of it, although the left side has a significantly higher elevation than the right and provides a better look at the green. You can also go over the bunker and try to get as close to the green as possible, but that might also leave you with a tricky chip if you land in the gnarly stuff in front of the green. It’s one of the most fun golf holes I ever played.

8. My favorite Legend holes: The par-4 1st is a handshake opener, and the 2nd is the first of four really good par-3s. The 3rd is a par-5 in which the daring route is to take your tee shot over a massive giant’s foot bunker — one of the coolest traps you’ll ever come across — but if you clear it and then find the green in two, please don’t three-putt for par like I did my first time. The 11th is a short-yet-gorgeous downhill par-3 with water threatening, yet it’s not even the best par-3 on the side. That belongs to the 17th, the signature hole at Giants Ridge, which is a 4 1/2-minute cart ride from the 16th green. It’s a longer par-3 where you’ll need to carry your tee shot over Sabin Lake. The tee box and green are some of the best, most beautiful spots on the property; it’s Northwoods golf at its finest.

9. Bring a rangefinder or GPS watch. There’s no GPS on the carts, so it will come in handy, especially at The Quarry. They have yardage books so make sure to grab one.

10. If you are already going this far north, you might as well make another stop. The Wilderness at Fortune Bay, another fantastic Minnesota course, is just 35 minutes north.

11. Play The Quarry twice. If you are playing Giants Ridge, chances are you are making a trip out of it, or at least playing more than 18 in a day. But if you were to repeat one course, The Quarry might be your pick. Not just because it’s ranked higher, but it has more blind shots and strategic quirks you’ll pick up the second time around, making that loop even more enjoyable.

12. All good things take work. Some of the best golf destinations require a full day of travel, and Giants Ridge, depending on your home base, can be a trek too. But golfers are still coming. The parking lot was flooded with out-of-state license plates when I was there, many of them from the Midwest. A few golfers I talked to go every year. What I found out on my trip they discovered long ago — this place lives up to the hype.