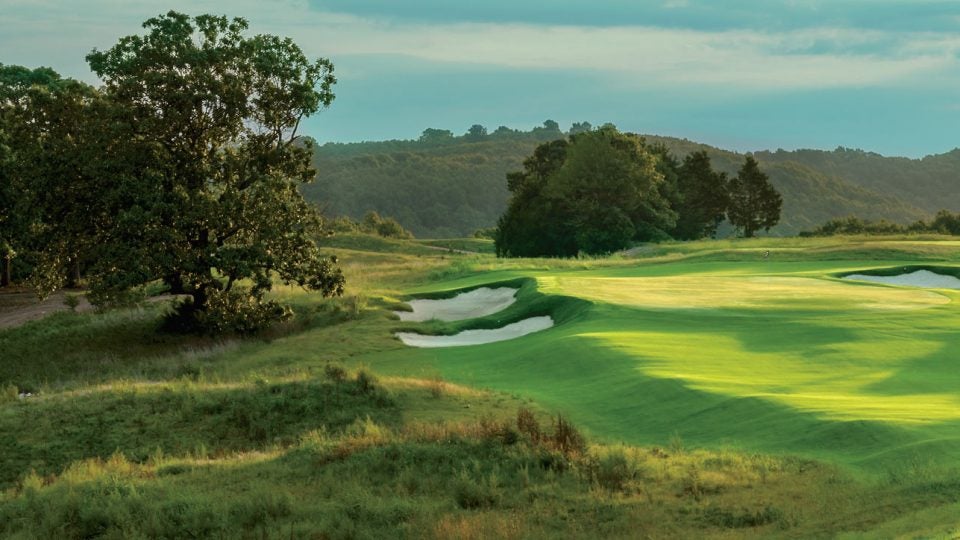 Ozarks National is pure Coore/Crenshaw, a golf course almost discovered on, rather than carved into, the land.
Evan Schiller

It’s Wednesday on the Senior PGA Tour — which a dyslexic overthinker renamed the PGA Tour Champions a few years ago — and the first-world problems are piling up in the pro-am. Standing on the sixth tee of the par-3 Top of the Rock course in south central Missouri, a day before the start of the Pro Bass Shops Legends of Golf tour stop, our group peers down at Billy Mayfair’s fivesome grinding out their business in a persistent drizzle on the green ahead. They’re choosing between two marginal tee shots. Long putts in either case. Pretty soon, Colin Montgomerie wanders across our tee box like a tall forest animal, eating an apple and dispassionately regarding the traffic jam ahead. He’s leading the group behind us, playing quick and breezily.

Our captain, the stalwart Fred Funk, takes no guff. He’s nursing a bum hamstring and coming off back surgery. Even so, he has shouldered the lion’s share of work on our five birdies so far. Funk locks Montgomerie into a quick exchange about land prices in Florida. And steak. They laugh, then stand caught in a mutual gaze at the green. It’s not going well out there. Same result. Twice. Twenty-eight-foot roll, miss. High. Twenty-eight-foot roll, miss. Short. And so forth. The rain picks up a little.

Monty mentions to Funk that they’re giving away a gun for closest-to – the-pin on the next hole. “A rifle?” Funk asks. “Handgun,” says a guy in the gallery. The pros give him a blank stare. “A Beretta,” gallery guy says.

Funk raises his eyebrows — a glint of possibilities. Monty shrugs and tosses his apple. On the distant green, Mayfair mercifully drops the bomb. All of this in distinct proximity. To me. In front of my eyes. In earshot. Just feet away. Such is the mise en scène of a pro-am. 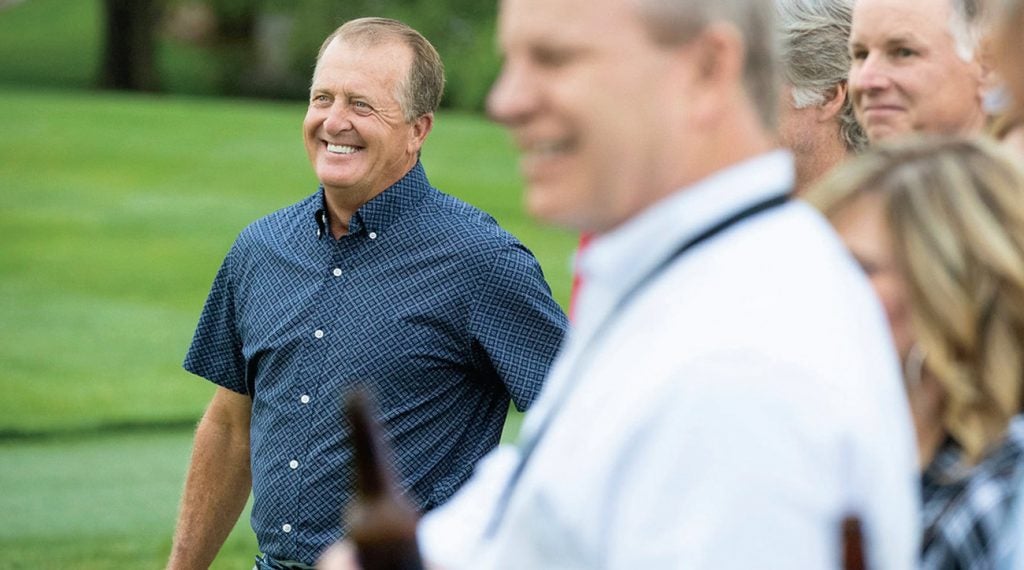 The author had the chance to play some golf at Big Cedar Lodge with Fred Funk.
Tom Chiarella

Playing a pro-am is like test-driving your daydreams. Legendary figures, in good spirits, amble with you through the sometimes pedestrian moments of the game, which suddenly feel a little charged. In the presence of greatness — Fred Funk throws darts at every pin, no one can mash an iron like Colin Montgomerie, and Billy Mayfair still chips better than anyone you know — the spectacular looms. The possibility of it rears its head in a pro-am because of the pro. That’s fine. But you are the am, and for this one afternoon — two if you’re here at the Legends of Golf — you too get to be part of the equation. It’s pretty damned fun.

To get to this pro-am: You pack your clubs, climb on a plane and fly into the surprisingly capable little airport in Springfield, Mo. You drive your rental straight to Lambert’s Cafe for a little local culinary love, where they feature Throwed Rolls (fresh-baked hard rolls tossed to you by a server standing two or three tables over), quality fried okra, and other comfort sides brought to every table in enormous, pass-around bowls. From there, you ease down the interstate and through a canyon of strip malls, mom-and-pop museums, barbecue joints, music halls and go-cart tracks beckoning to the highway from the tourist mecca of Branson, a city rife with perfectly wholesome pleasures for outdoorsman and indoorsman alike. Yes, you pass Branson. You’re here for golf, not for the Reza Edge Illusion Magic Show. So you flow a little farther south to an unlikely, not-much-decorated exit in Ridgedale. There you follow the understated signage to another turnoff for Big Cedar Lodge, a marvelously isolated, immaculately engineered fantasyland resort featuring an ever-expanding clutch of world-class golf courses in its deep interior.

You are not to be blamed if Big Cedar Lodge feels overwhelming, like some manqué Disney resort dropped from the skies above it, on top of these boondocks with a little less than full consideration of the landscape, culture or history of the place. Said place being: The Ozarks. But as a golfer, your worries would be for naught. You could disappear for days in Big Cedar’s rapidly growing rota of tracks: Buffalo Ridge, a Tom Fazio redo of what was for more than a decade Arkansas’ top public course; a couple of gloriously challenging par-3 layouts, one from the Golden Bear (Top of the Rock), another from the Black Knight (Mountain Top); the just-unveiled Ozarks National, a steely, 7,036-yard Coore/Crenshaw instant classic; and Payne’s Valley, a Tiger Woods design created in tribute to Springfield-born Payne Stewart and set to debut next year. 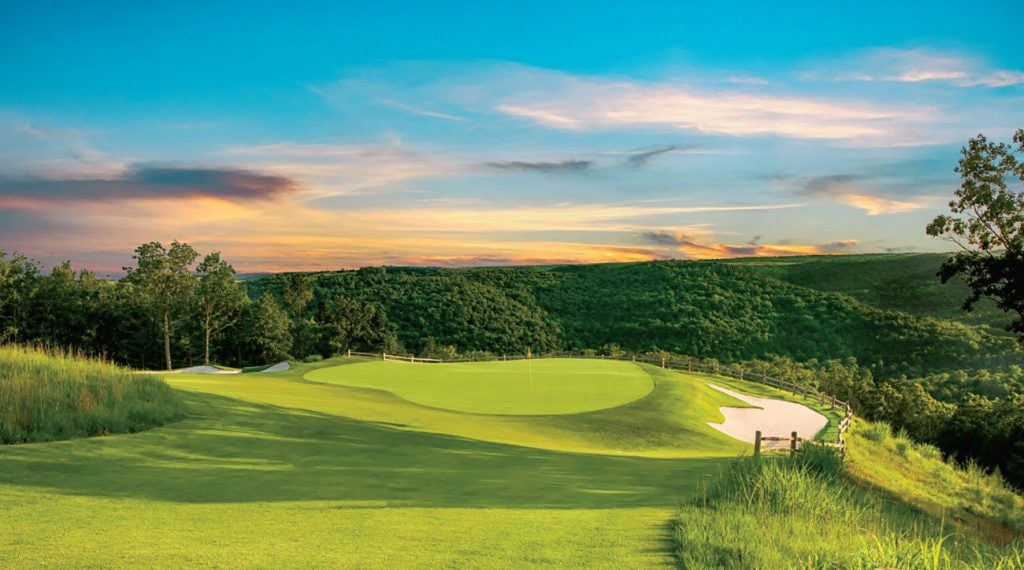 The digs you leave behind while playing are playfully elegant and seriously rustic, like a Four Seasons run by folks who like a good Cracker Barrel. It’s staffed by the deeply loyal employees of Bass Pro Shops’ billionaire CEO and Big Cedar mastermind Johnny Morris, who hand paints the road signs himself. You can stay in a lakeview cabin, a kind of five-star man-cave seated in a spruce forest, appointed with standalone tub, full kitchen, private balcony, large propane grill, and a working fireplace with ample firewood and kindling en suite. The cabins are arrayed so that no lakeside window looks out at another cabin. Woods and water are all you see. The Big Cedar grounds are lined with spectacular trails, waterfalls, walkable cave systems and dramatically excavated sinkholes bordering the courses. Multiple marinas ring the central, 43,000-acre Table Rock Lake. There’s a shooting academy, fun for the kids, and, of course, snagging smallmouth bass on Table Rock is a must-do experience.

As a member of the press, I’m lucky enough to be looped into this year’s Legends of Golf pro-am — and unlucky enough to tee off without hitting a practice ball. Day one, on the difficult Top of the Rock, I’m paired with Funk; a low-handicap influencer from LA; the influencer’s girlfriend/partner, who rocks a high ponytail and swings with the grace of a snow crane; and Franklin Delano Roosevelt’s great-grandson. Go figure. Nine holes with fearless Funk, nine more on day two with longtime pro Wes Short at Ozarks National, which sits atop the foothills looking for all the world like it was always there. “We want it looking like the rest of the land — we want it windy, dusty and yellow,” says architect Bill Coore, a guest this week, along with high-profile swingers like Justin Timberlake and Kid Rock, and the Tour’s exceedingly relaxed senior set (Trevino, Kite, Daly, Pavin, et al). Really, it’s a party. 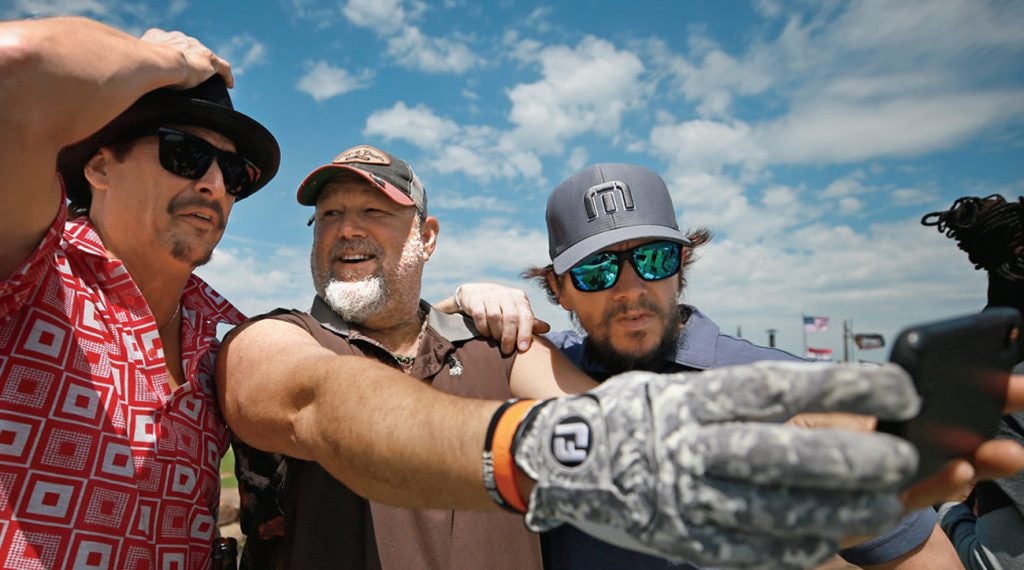 Master of Bassmasters Johnny Morris, retail genius and now a renowned conservationist, tells a story of dropping Coore off to walk Big Cedar’s vast acreage when they were envisioning the course coming together: “I’d come back hours later and I’d find him crawling around the land.” Today, Coore happily walks the course that the land once presented to him in the abstract. “We built it to be walked,” he says. Hunters, fishermen, golfers — we all set out on a walk, with no guarantee of success. “The journey,” Coore says. “That’s the connection to Johnny Morris’s world, the world of the outdoorsman.” (That said, carts are available.)

This two-day split of the pro-am serves to open up other possibilities at the resort. Pre-golf, I went fishing, landing a decent-sized Kentucky smallmouth, and then three more within an hour. But the main event is still golf, and despite some heavy rain, the format makes our games feel unrushed, uncrowded and expansive. Funk is avuncular from the get-go. Wes Short swings like a solid lump of muscle. Funk wears a shirt with four sponsors’ logos. When he catches me taking stock, he says, “I’ve always said I’m the only member of the Senior Tour happy to be sponsored by Depends.” He laughs at the thought. “Hell, those things work.” He leaves it at that. There is no appropriate follow-up. Fred Funk apologizes for nothing. 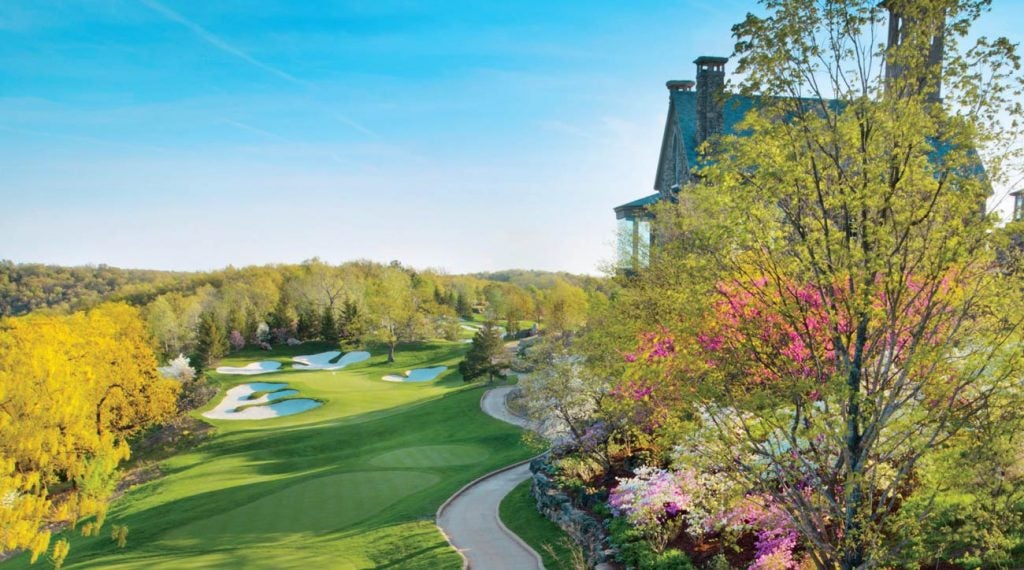 I, on the other hand, have a lot to apologize for. My game is distinctly in the tank. I’ve hit more balls off the hosel than off the face. My head is awash with Zen. Live in the moment. But golf is all about time. Don’t worry about the last swing. Or the next one. Enjoy where you are. The problem is, I am enjoying it. I love the look of the Ozarks. I’m not at all nervous. I’m not watching myself at all. I am as unembarrassed by my tanking as I am fascinated by the steady excellence of my two pros.

Eventually, Mayfair’s crew clears the green. Funk tees it up and plunks the ball 12 feet from the hole in an eyeblink. There is applause. Mano-man. Steady excellence. And a torn hamstring. Funk waves to the small gallery and sets out before any of us move. Of course he does. It is golf and he’s a pro. It is golf. Sometimes you get jammed between two groups playing at different speeds. Maybe that’s how golf should be too. You play fast, and you take it in slowly. You push time; you stretch time.

I can tell you now: Fred Funk won’t have it any other way.