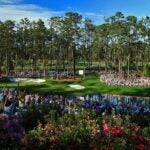 The 16th hole at Augusta National.

By almost every metric used to rate a golf course, Augusta National Golf Club is first.

Augusta National is arguably the most famous golf course in the world, the most recognizable, the most celebrated and one of the most exclusive. Golf fans have drooled over Alister Mackenzie’s famed routing for centuries, while Masters participants oscillate between varied states of profound love and terror as they operate around National’s perfectly manicured fairways.

But where does it rank on GOLF’s Top 100 Courses list? Good question.

It may surprise you to learn that Augusta National isn’t the top-ranked golf course in the world, at least not according to GOLF’s Top 100 course raters. These architecturally driven experts are faced with the gargantuan task of playing and ranking many of the best golf courses on earth — and in their eyes, Augusta National belongs in the highest echelon of courses, but perhaps not at the very top of that list.

In GOLF’s latest ranking of the Top 100 Courses in the World, Augusta National came in No. 9 overall.

Coming in above Augusta, in order, are:

No. 6 Royal County Down

No. 5 National Golf Links of America

No. 3 The Old Course at St. Andrews

Now, golf fans will rightfully point out that the clubs ranked above Augusta don’t host major championships every year, and some (NGLA/Cypress) have even been called too short or too easy to serve as a proper test for the best players in the game. But GOLF’s ranking system leaves it up to the raters to select what they believe to be the best course in the world. For some, Augusta National will earn high marks for hosting the Masters each spring and repeatedly proving itself as one of the game’s greatest ‘tests.’ But for others, it’ll lose points for playability and enjoyment next to a course like St. Andrews.

Ultimately, though, the measure of what makes the ‘greatest’ course in the world is in the eye of the beholder. If you feel Augusta National is the greatest course on earth, you’re entitled to that opinion.