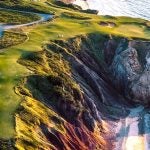 When the Cabot Links course opened in 2012, it was hard to imagine a second act ever upstaging Canada’s first true links layout. Then Cabot Cliffs hit the scene, earning GOLF’s choice for Best New Course in 2015. It’s magical, towering over the Gulf of St. Lawrence while taking golfers on a wild ride through pine-studded highlands, valleys and Scottish-style dunes. Cabot Links is a Rod Whitman design built atop a 200-acre sandy strip discovered by resort co-founder Ben Cowan-Dewar — the parcel was meant to house a golf course since creation. Cabot Cliffs may edge out Cabot Links in the rankings, but debates linger (never rage — this is Canada) into the night at the resort’s Public House as to the proper pecking order. The key, here, is not to get hung up on the data, but to soak up the ephemeral experience. This is accomplished by sampling both courses, relaxing in an oceanfront golf villa and savoring fresh local halibut and Nova Scotia lobster at Panorama. Departing Cabot Links, a satisfying smile does set in knowing one has played one of the best four-hole closing stretches in the world. By all accounts, holes 15 through 18 on Cabot Cliffs are the closest thing the Eastern Seaboard has to Cypress Point. Hey, debates aside, what golfer doesn’t keep score?