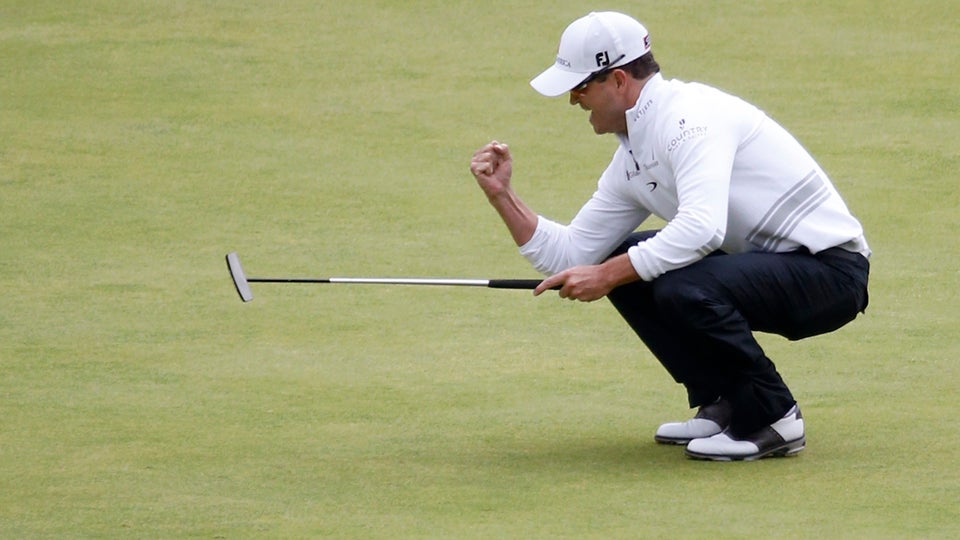 Zach Johnson reacts after making a birdie putt on the 18th hole during the final round at the British Open at the Old Course in St. Andrews, Scotland on Monday, July 20, 2015.
Alastair Grant

St. Andrews, SCOTLAND—The Slam is dead. Long live Zach Johnson, once the most underrated player in golf and now the game’s greatest overachiever.

After Johnson dusted the pre-scandal Tiger Woods at the 2007 Masters, Rick Reilly opined, “I think Zach Johnson in ten years has a real chance to be your server at Olive Garden.” Eight years later, Johnson is most of the way to the Hall of Fame, with 12 PGA Tour victories. More impressively, Johnson is only the sixth man to win both a Masters and an Open at the Old Course, joining all-time greats Sam Snead, Jack Nicklaus, Seve Ballesteros, Nick Faldo, and Woods.

The story of a wet, wild final round of the weather-delayed 144th Open Championship was as much about Jordan Spieth’s spirited run at the Grand Slam as it was the victory by Johnson, who outlasted Louis Oosthuizen and Marc Leishman in a four-hole playoff. After bogeying the 71st hole—approach shot well short of the green, then a missed 8-footer—and leaving his approach to 18 in the Valley of the Sin, Spieth finished one shot out of the playoff and was left to rue what might have been. “I just wish I had given myself a little better opportunity,” he said. 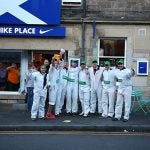 You may also like Behind the Scenes at the 2015 Open Championship at St. Andrews

As usual, Johnson maximized his. An opening 66 left him one shot back of the first-round lead, but ensuing rounds of 71-70 left him three off the 54-hole lead in a nine-way logjam for sixth place. The final round was a cold, windy, rainy, nasty day; in other words, perfect Open weather. But with the front nine playing downwind a bevy of players raced to hot starts, with both Johnson and Leishman going out in 31 to reach -14. (Oosthuizen, one of the 54-hole leaders, shot 34 to get to -14.) Spieth birdied three of first six holes to join them but made a colossal error on the par-3 8th hole, running a birdie putt clear off the green. He compounded the mistake by missing a 5-footer for bogey. That dropped him three strokes off the lead. “If you make double bogey it’s a very difficult climb,” Spieth said,” and there’s absolutely no reason to hit that putt off the green. My speed control was what really cost me this week, the five 3-putts in the second round, and then just my speed control in general wasn’t great. On that hole I had left so many of them short throughout the week I said, I’m not leaving this one short. So that was a mental mistake on my part.”

But for all of his manifold talents Spieth’s toughness may be his single greatest strength: he birdied the next two holes to get back in the fight. With birdies on 10 and 12, Leishman reclaimed the lead, and the margin was up to two when Johnson bogeyed the Road Hole after his foot slipped and he semi-shanked his second shot. But Leishman shrank from the enormity of the opportunity, making his first bogey in 35 holes at number 16 after sniping his approach shot into a bunker and blowing a 4-footer. Johnson caught him at 15 under with a gorgeous 25-footer for birdie on the 72nd hole. “There was emotion there because it was the 72nd hole and I had a good round going,” Johnson said. “The emotion was there, briefly, but I knew mentally I had to get ready for what happened.”

When Leishman failed to birdie the 18th they were tied for the clubhouse lead, ceding the stage to Spieth and Oosthuizen behind them. After a good drive at the monstrous Road Hole, Spieth still had 240 yards left, into the fan. He did okay to leave his approach 20 yards short and then pitched credibly to eight feet. A marshal nearby muttered that similar putts had been misread all day long, and Spieth later allowed that he “read too much into it.”

It never scared the hole.

So now he needed a birdie at the last to join the playoff. Spieth pulled his drive way left, leaving him between clubs. He then did the inexcusable, babying his approach shot short. When he failed to pull a Rocca, the Slam was dead. “I’ve made a lot of the right decisions down the stretch and certainly closed plenty of tournaments, and this just wasn’t one of those,” Spieth said. “It’s hard to do that every single time. I won’t beat myself up too bad because I understand that.”

When Oosthuizen made a textbook birdie at 18 the playoff became a three-man affair. Johnson announced his intentions by playing four perfect shots and birdying the first two extra holes and then at the third, the 17th, after King Louis missed a five-footer for par, Johnson buried a crucial four-footer to save bogey and preserve a one-stroke advantage. Oosthuizen could have extended the playoff at 18 but missed a 12-footer and just like that Johnson, 39, earned a place in the pantheon. He drives the ball straight and his short-game is deadly, but Johnson’s greatest attributes are anatomical. 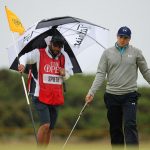 “I’d like to say he has something other than heart,” says Johnson’s caddie Damon Green, who did a memorable chicken dance after his boss’s birdie on the 72nd hole. “He’s got the biggest pair out here. He’s not afraid of being in the lead, he thrives on it. A lot of guys don’t like being in the lead, they can’t stomach it. But he’s got a cast-iron stomach. Man, he’s solid.”

That’s what you learn as a pipsqueak holding your own in team sports. Johnson was a starting wide receiver on his seventh-grade football team, despite weighing less than 90 pounds. As a 100 lb. high school sophomore he led his golf team to the state championship, and as a senior he was a 120-pound, all-city right wing in soccer. Oh, and while at Drake, he won a campus-wide three-point shooting contest, canning 19 of 25 from beyond the arc. “He’s one of those irritating guys who is good at everything he does,” says his wife Kim.

From the very beginning of his pro career Johnson has been perfecting the art of winning. On the micro-mini Prairie Golf Tour in 2000 he won twice and finished third on the money list. He moved up to the Hooters Tour and in 2001 ended the season with a three-tournament winning streak that propelled him to the top of the money list, earning the nickname “Back-to-back-to-back Zach.” In ’03 he tore up the Nationwide Tour, winning twice and setting records for scoring average (68.97) and money ($494,882), thus earning his spot on the PGA Tour the following season.

In the ninth start of his rookie year he won the BellSouth Classic and, for staying so true to his small-town roots, the pride of Cedar Rapids, Iowa received congratulatory notes from his first-, second-, third- and fourth-grade teachers. With all the victories that have followed, only Woods, Phil Mickelson, Vijay Singh, Ernie Els, Davis Love and Jim Furyk can claim more among active Tour players. Still, Johnson finds it useful to cling to his role as a small fry. “I’ve always liked the stories [of] the teams and the individuals that are kind of coming from behind, that are not supposed to win,” he says. “Those always intrigued me in sports. I’m not saying I’m always an underdog, but I kind of feel like it. If anything, I put myself in that posture where I feel like I’m an underdog.”

Even now that he has been confirmed as a player for the ages he’ll have no trouble maintaining an enlarged perspective. Three young kids will do that. When Zach met Kim, in the parking lot of the Orlando apartment complex where they both lived, she had recently graduated with a criminology major from Stetson University and, after a stint in AmeriCorps, taken a job with the Orlando police department, designing and implementing crime prevention programs in low-income neighborhoods. She knows more about the real world than the average Tour wife, and she’s all too happy to keep her husband grounded in it. In fact, busting Zach’s chops is a pastime enjoyed by all of his close friends and immediate family.

Years ago he was the victim of a classic April’s Fools joke in which Kim, Green and Zach’s father-in-law were all conspirators. For the ruse, a copy of the front page of the Des Moines Register was painstakingly recreated with a phony story about a renovation of the Drake football stadium. The article reported that retired Walgreens CEO Dan Jordnt was donating $5 million toward the project, which was true, but the made-up caveat was that he would cough up the money only if the field was renamed after Johnson. Zach’s father was quoted as saying, “Why not? He’s the Tiger Woods of Iowa.” (That catchphrase remains popular in the family to this day.) The masterstroke was that in the story, fictitious militant local activists were quoted threatening to picket if the field was renamed for Johnson.

“He started freaking out,” says Kim. “He was pacing around muttering, ‘I can’t believe no one even asked me.’ He called [his agent] and started yelling at him. Then in the middle of all that he got kind of excited and was like, ‘You know, I’m probably going to have to show up for some kind of ribbon-cutting!’ Then he freaked out some more. He was so upset I finally had to tell him it was a joke.”

Says Zach, “I was just happy there weren’t going to be any protesters.”

There’s nothing remotely controversial about Johnson, and he deserves to be celebrated even though he did stop America’s sweetheart from making history. “I’m humbled by the talent I’ve been given, and I’m humbled right now because of the names etched on this piece of metal that is very special,” Johnson said in the champion’s press conference, gesturing toward the Claret Jug. “It’s a who’s who of the game, the individuals who are historic in sport. I’m humbled, honored, and this is beyond surreal.”

The Tiger Woods of Iowa? There’s a better way to describe Johnson now: champion golfer of the year.