The governing bodies wanted feedback to the proposed changes to the Rules of Golf they rolled out last February — and feedback is what they got. Here are the four most significant changes the USGA and R&A made to the new rules, based on input they received from golfers around the world. These new rules will go into effect on Jan. 1.

What they proposed: There was no proposed alternative to the stroke-and-distance penalty.

What they settled on: A new local rule will permit committees to do away with the stroke-and-distance penalty, which most golfers have been begging for since … oh, the beginning of time. As an alternative, golfers will be allowed to drop the ball in the vicinity of where it was lost and or went out of bounds (including onto the nearest fairway), under a two-stroke penalty. To be clear, that means, after pumping a drive O.B., you’d hitting your fourth shot from the spot where you drop. This rule will not apply to professional tournaments or other elite competitions. It is meant to help keep things moving in recreational and club-level play. What they proposed: Keeping the existing one-stroke penalty

What they settled on: Eliminating the one-stroke penalty for a double-hit. Instead, golfers will simply count the extra stroke they took while swinging at the ball.

3. How to take a proper drop

What they proposed: Allowing golfers to drop from as low as two inches off the ground.

What they settled on: Golfers will now drop from knee height. 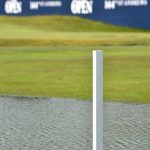 4. How to measure when taking relief

What they proposed: Within 20 inches or 80 inches, depending on the situation (taking relief from a cart path, say, or a lateral hazard).

What they settled on: Within one or two club lengths, depending on the situation.

For our full report on the new rules changes, visit here.