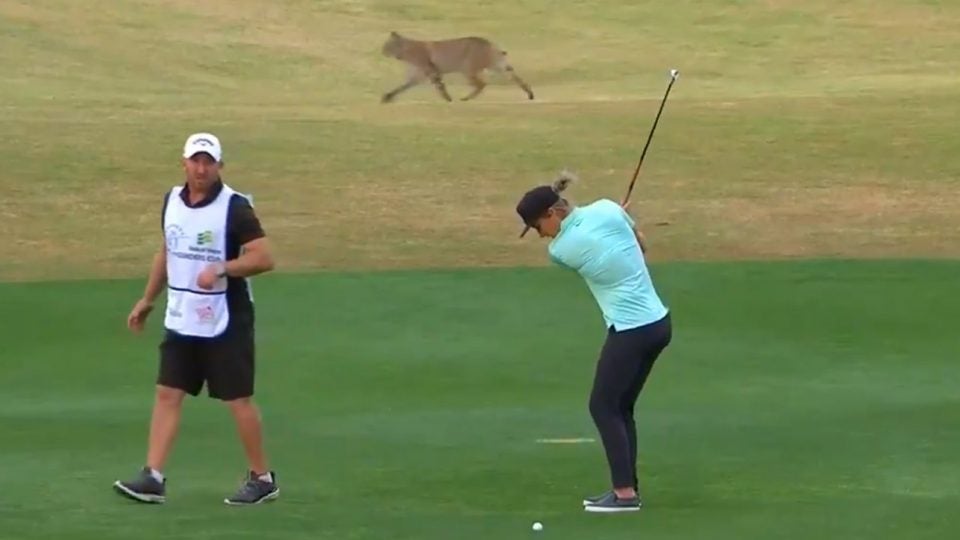 The LPGA is in Arizona this week for the Bank of Hope Founders Cup, and in addition to the desert heat, the players have had to contend with dangerous wildlife during the event.

In a clip posted to the LPGA’s Twitter account, pro Mel Reid is lining up an approach shot on the 16th hole when the bobcat suddenly races behind her. Reid appears to be completely unaware of the fleet-footed feline’s presence. She goes on to make her shot without skipping a beat, while the bobcat continues on its way, eventually crossing the adjacent fairway.

You never know what you may find on the fairways when playing in the desert! #LPGAFounders pic.twitter.com/X3b9J2mrHi

After seeing the video, Reid retweeted it along with a quality dig at her caddie, Mark Wallington:

Think it was a girl cat because she took one look @mwally69 and ran a mile #smartgirl https://t.co/bkWJVSS5Y9

Bobcats, which are native to much of the continental United States, tend to be about twice the size of your average house cat. While they are skillful and deadly predators that are known to stalk and then ambush their prey, Reid and the other pros don’t need to worry about ending up on the cat’s menu. The animals preferred prey are mammals between 1.5 and 12.5 lbs.

After the unlikely encounter, Reid finished out her round for an opening score of one-over 73. That left her nine shots behind first-round leader Celine Boutier.

This isn’t the first time we’ve seen wild cats crashing golf tournaments. A few years ago, Henrik Stenson and Jason Dufner had their rounds at the Qatar Masters interrupted when a stray house cat ran onto the green and hung out for a while.