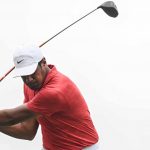 Despite being tabbed as the player with the most raw power on the PGA Tour, Tony Finau says he won't get sucked into the chase for distance,

In September of last year, a video of Tony Finau surfaced on Instagram that started some speculation. The since-deleted video posted by the account Sacred Links showed Finau going all out after a driver and reaching ball speeds in excess of 200 mph.

This video (along with other comments last summer) stoked speculation that Finau would enter the great distance arms race. Bryson DeChambeau started the trend, and with more and more players looking for that next competitive edge, Finau looked like a likely candidate — especially considering his swing.

Finau is notorious for his truncated backswing. But even with the abbreviated move, he still is known as a bomber on the PGA Tour. He averages 305 yards per drive this season on Tour, but with his short swing he has plenty left in the tank.

Other players know that he’s among the game’s longest, too. Even if the stats don’t reflect that. Cameron Champ, yet another long bomber, said last year that he believed Finau was the longest hitter on Tour, to which Finau agreed.

“I think if we were all to maybe tee up four or five golf balls on the range and just let loose, I have a hard time believing somebody is going to hit it further than I am,” he said. “When I was younger, I got up to about 212 ball speed with a standard driver, which is pretty fast. I don’t know if I quite have that, but I[‘ve] gotten up to 206.”

But if Finau has all that power left in the tank, why doesn’t he use it? The lack of control when his swing speed gets up that high might have something to do with it, but there’s another factor at play — ego.

The allure of seeing his name at the top of the driving-distance charts just doesn’t mean all that much to Finau. He knows he has power in his arsenal, but he doesn’t feel the need to showcase it all the time.

“The driving distance stat, to me just seems, it doesn’t mean as much to [me] maybe as it does to some other guys, as far as their ego,” he said. “I’m not big on the driving distance stuff. I think your scoring average and winning golf tournaments is ultimately why we’re out here. I’ve played a lot of high-level golf and I’m more interested in that than the whole distance debate deal.”

Although he has tons of power in his bag, as showcased by the video last summer, Finau ranks just 30th this season on Tour in driving distance. And while it might not mean much to his ego, he’s confident in his abilities to poke it out there past his peers.

When asked by a reporter if he thought there were 29 players longer than him on Tour, Finau let out a little laugh.