Why Rory McIlroy is going carbon-neutral (and footing the bill!) 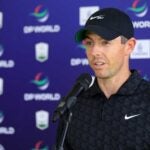 Rory McIlroy is paying six figures this year to ensure he has a carbon-neutral footprint.

Normally, there might be more than six degrees of separation between world leaders like Joe Biden or Boris Johnson and professional golfer Rory McIlroy. But this week, they are closer than ever, linked by a common issue that has nothing to do with the President’s handicap: climate change.

In the wake of world leaders discussing climate change at the COP26 Summit last week, McIlroy was asked an extremely open-ended question about his feelings on the issue and how his life intersects with it. He is a professional golfer, after all, playing on courses that sometimes threaten native lands, and traipsing the world in private jets that emit harmful gasses. It’s something McIlroy has rarely, if ever, been asked in a press conference preceding a golf tournament, but he was more than ready to discuss it.

“It’s funny you say that,” McIlroy said. “So two years ago, after I won in China, I flew back home privately, and it was just me on the plane. And I just got this massive sense of guilt come over me just because this can’t be good and all that sort of stuff.

“So we ended up reaching out to the GEO Foundation who do a lot of great sustainability things in golf, and that was the only sort of organization that we knew of that I guess could help us go in the right direction. What I was trying to do is make all my travel — I wouldn’t self-profess to be an eco-warrior, but I’m someone that doesn’t want to damage the environment anyway, so how can I make my travel around the world neutral, how can I neutralize what I do.”

What does Carbon Neutral actually mean? It means simply neutralizing the harmful output. Pulling greenhouse gasses out of the atmosphere at the same rate you put them into the atmosphere. McIlroy does it by spending extra money — 150,000 pounds this year, according to Golf Digest — so that on New Year’s Eve, he’s treated the environment in a neutral way. Or at least in a non-negative way. McIlroy didn’t expound upon where his 150,000 pounds goes.

“It’s something that I have a conscience about and I take it seriously, especially when you see some of these weather events that are happening,” McIlroy continued. “And I live in a part of the world where hurricanes are very prevalent and becoming more and more prevalent as the years go on. I think we can all play our part in some way or another.”

That part of the world for McIlroy is south Florida. He’s joined down there by many, many PGA Tour players, most of whom fly private on their own as well. At times they’ll fly together, but schedules don’t always match up perfectly.

“We all can do our part,” he said. “I certainly don’t think it’s something that I’ve talked to many of the players about really, but just from my conscience and my mind, I know that I’m at least — when I do travel and I travel privately that I’m not doing it to the detriment of the world that we live in.”