One pro accused another of cheating in 2018; Sunday they play together 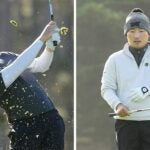 Joel Dahmen and Sung Kang play together on Sunday during the AT&T Pebble Beach Pro-Am.

Joel Dahmen was texted his fourth-round grouping at the AT&T Pebble Beach Pro-Am. “(TEE TIME ROUND 4) Joel Dahmen Rnd 4 Tee 10 @9:56 a Local Time Pebble Beach Golf Links With C.T. Pan & Sung Kang,” it read. He tweeted it from his phone.

Dahmen hit one key with it.

In July of 2018, emotions ran high. During the final round of the Quicken Loans National, Kang hit his second shot on the dogleg-left, 566-yard, par-5 10th into the hazard left of the green, and from there, Kang, Dahmen and an official argued for about 25 minutes over the drop — Kang believed the ball crossed the hazard close to the hole and would drop there; Dahmen believed the ball crossed some 200 yards back. Kang would eventually take his drop about 35 yards away.

After the round, Dahmen tweeted about Kang for the first time.

“Kang cheated,” he wrote. “He took a bad drop from a hazard. I argued until I was blue. I lost.”

“He wanted to drop up by the green, and I said, ‘No, I don’t think it crossed [the hazard],’” Dahmen said in May on GOLF’s Subpar podcast. “I went very political about the whole thing — you’ve got to protect the field. I don’t want to do this, you know. That was the first five minutes.”

The Tour said in a statement in 2018 that Kang “is standing by the ruling that was made by PGA Tour Rules officials on Sunday and will have no further comment.” Five weeks after the Quicken Loans, Dahmen said on Subpar, Kang confronted Dahmen at the Canadian Open.

“Either way this was getting out and everyone knows it so I just accelerated it a little bit, but it was back and forth of five minutes of I told him to apologize to me, he really wanted me to apologize to him and then we have not spoke since.”

Dahmen and Kang very well may on Sunday.