‘If you can sleep at night:’ Behind the scenes of Sung Kang’s alleged cheating incident

In the aftermath of Joel Dahmen’s serious allegation that Sung Kang “cheated” on the 10th hole in Sunday’s final round at the Quicken Loans National, GOLF spoke to a series of eyewitnesses in an attempt to piece together an accurate sequence of events.

After a 306-yard tee shot down the left side of the fairway at TPC Potomac’s dogleg left 566-yard par-5 10th, Sung Kang had 247 yards remaining for his approach shot. Looking to keep his momentum going after a three-under 32 on the front nine, Kang waited for the green to clear. But his approach shot flew left of his target. “Go!” yelled Kang, according to multiple witnesses. But the ball landed in the hazard left of the green.

Kang’s playing partner Joel Dahmen had just hit his approach from the right side of the fairway, 260 yards from the flag. He hit the green and waited with caddie Geno Bonnalie as they studied the flight of Kang’s ball as it flew near the green. Onlooker Bob Yosai, a friend of Dahmen’s who was following the group, stood a short ways behind them with what he described as a view directly down the hazard line. Behind the green, 26-year-old Michael Klock was working in the ShotLink tower.

Yosai turned to his wife as Kang’s ball came down. “That guy’s dead,” he remarked. “He’s going to have to drop all the way back here.” But a dejected Kang began to walk down the fairway toward his ball. “I figured he was going to see if he could play it from the hazard,” Yosai said. “That was the only thing I could think of.”

After a short search, a spotter located Kang’s ball some 5-8 yards into what another onlooker described as “halfway-up-your-thigh type s—.” There was no way Kang could play the ball. Instead, he began pointing to the spot at which he thought it had entered the hazard — nearly pin-high.

Dahmen and his caddie were incredulous. “We didn’t agree on the spot where it ‘crossed,'” Bonnalie wrote later on Twitter. A rules official was called in.

Because the 10th hole is a dogleg left with a hazard all the way down the left side, Kang’s ball would have needed to re-cross the hazard nearer the green in order to earn the drop he was requesting. The exact line his ball had taken en route to its final resting place thus came under careful scrutiny.

Klock was certain on his point of view. “From my vantage point next to the green in the back, Kang’s second shot was very far left and at no point ever came close to being in play from the initial point of entry,” he wrote in an email to GOLF. And he wasn’t alone: “The left side green marshal agreed, as did one of the left fairway marshals,” he added.[image:14172591]

An overhead view on Google Maps or ShotLink suggests that Kang’s ball would have needed to be hooking significantly from right-to-left to enter the hazard at the point he’d suggested for a drop, but Yosai agreed with Klock’s assessment. “If he’d hooked it, I would have known,” Yosai said, given his vantage point. “It never curved across the line I was looking at. Really, it looked like a dead-straight ball flight, something that didn’t move more than two yards the entire way.” As the rules official arrived, Yosai and another onlooker each said they heard Kang describing his shot shape to the official as traveling straight.

The discussion with the rules official, Dahmen and Kang continued, reaching an impasse as the duo of Ryan Palmer and Ben Crane (the latter not known for his quick pace) played through. “We went back and forth for 25 minutes,” Dahmen wrote on Twitter later. The rules official gave Kang a ride back to the fairway to try to recreate the shot’s shape. “But he didn’t go back to the spot he’d hit from,” Yosai said. “He was really a lot closer to Dahmen’s ball further to the right side of the fairway. And he didn’t bring his clubs back with him. That told me he was totally committed to dropping it up by the green.” 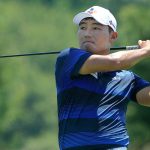 You may also like #AskAlan mailbag: Can pros ever recover from cheating allegations?

Kang told the official that he was “95 percent sure” that his ball had come back into play before re-entering the hazard near the green. The official, who had not seen the shot, told him, “95 perfect sure is not 100 percent sure,” according to Klock.

After further discussion with the official and Dahmen, Kang conceded that his ball more likely crossed the hazard 35 yards from the pin rather than the case he had initially made to drop it pin-high. The decision seemed to come down to two options: that drop or else playing his fourth shot from the area of entry, at least 200 yards farther back in the fairway near where he’d hit his initial approach.

“From what I gather, the rules official and Joel Dahmen put the ball in Kang’s court and let him decide what he believed the result should be,” Klock said. Dahmen was sure which side he stood on. “If you can sleep at night then take your drop,” he told Kang to decide for himself, according to Klock.

Kang chose to drop at a point 37 yards from the hole, hit his approach to 17 feet, and rolled that putt in to save an eventful par. Dahmen, who had hit his approach onto the green, made a two-putt birdie. Each would go on to shoot three-under 32 on the back nine. While the moment itself was decidedly intense, Yosai said that Kang seemed to get more talkative, if anything, as the round continued. “There was zero negativity on the next tee,” he said. “I’m sure Kang thought he was past it all after making his par.”

Dahmen wasn’t the only one perturbed by the way the incident played out. Yosai spoke to the spotter who had initially found the ball and he was convinced that Kang had taken an incorrect drop. Another greenside witness agreed that the ball “was in the hazard from the beginning.” A third onlooker wrote in an email that he confronted the rules official, who defended his actions before driving off. Seemingly unbothered, Kang rocketed up the leaderboard, cruising to a six-under 64 that turned out to be the second-best round of the day. He finished in solo third, easily good enough to qualify him for the British Open. Dahmen finished T23.

“It was a typical dispute about where or if it crossed the hazzard,” Dahmen wrote afterwards on Twitter, allowing that these sorts of disputes happen often during the normal course of play. Where this was different was in Dahmen’s deployment of a particularly choice two-word phrase: “Kang cheated,” he wrote, setting off the firestorm. Some fans praised Dahmen for doing his part to protect the field, while others criticized him for levying such a charge when the call fell in a sort of gray area.

Yosai initially came out strong against Kang, but backed off from calling him a cheater a day later. “I’m hesitant to use the ‘C’ Word, because I don’t know exactly what he was thinking,” he said. “But in my mind he 100 percent took the wrong drop.”

The PGA Tour released the following statement: “A PGA Tour Rules Official handled the ruling, interviewing both players, caddies and marshals in the vicinity. The official then took Kang back to where he hit his second shot, and Kang confirmed his original belief that his shot had indeed crossed the margin of the hazard. With no clear evidence to prove otherwise, it was determined by the official that Kang could proceed with his fourth shot as intended, following a penalty stroke and subsequent drop. The PGA Tour will have no additional comment on this matter.”

Kang was unaware of Dahmen’s comments until GOLF reached out with a request for comment. He chose to respond through the PGA Tour. “He is standing by the ruling that was made by PGA Tour Rules officials on Sunday and will have no further comment, other than he is looking forward to focusing on finishing out the season strong, and he is excited about the opportunity to play in the Open Championship again in a few weeks.”

Kang has withdrawn from this week’s event at the Greenbrier, although that is believed to be as a result of his qualifying for the British Open rather than any sort of response to Sunday’s controversy.