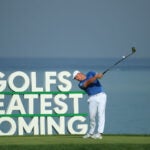 Bryson DeChambeau hits his tee shot on Thursday on the 17th hole at Royal Greens Golf and Country Club.

Bryson DeChambeau is leading the PGA Tour in driving distance this season. He led the PGA Tour in distance last season — and his 322.1-yard average was 19.6 yards more than the season before, when he began his drive, no pun intended, to add size in order to add distance. He’s been fixated on distance metrics like ball speed. He’s teased the use of a 48-inch driver, which would, theoretically, give him more distance off the tee.

DeChambeau embraces distance. As much, apparently, as  …

“I welcome it as long as they don’t change the human element,” DeChambeau said this week before the Saudi International. “Again, I’m going to play with whatever they gave me. I’m not worried about it. I’m going to do what that they say is legal, and I’ll just go from there and find the best way to play for me under The Rules of Golf.

“There’s no issues — it’s funny, I’m sure there’s a lot of excitement about me having a potentially controversial thought on it, but I don’t. I think it’s a really cool thought process.”

On Tuesday, the USGA and the R&A released the update as its follow-up to its Distance Insights Project, released a year ago as a summary of what the governing bodies perceive to be golf’s distance problem. The Update addresses three proposed equipment rules — a 46-inch limit on the driver shaft, down from 48; and updates on ball and driver testing. And it also discusses “research topics/areas of interest” — specifically, “the potential use of a Local Rule that would specify the use of clubs and/or balls intended to result in shorter hitting distances,” and “a review of the overall conformance specifications for both clubs and balls.”

DeChambeau said the USGA and the R&A “are trying to make it more of a — I guess you could say same or fair playing field.”

“Where you can’t just put a 48-inch driver and it works for this person, you could gain six, seven miles an hour where somebody couldn’t because the driver just doesn’t work for them or whatever,” he said. “I think the most important factor in this whole discussion is that they are focused on keeping the integrity of the game and trying to make it more of a fair playing field while not taking out the human element.

“From my perspective, I think it suits me really well because as of right now, I’m still playing the 45-and-a-half-inch driver, and it’s suiting me perfectly well, and I’m not going to the 48. So if someone was trying to go to the 48 for them they could gain six, seven miles an hour pretty quickly and now it’s not a possibility. And I think it’s going to be more difficult for people to gain speed easily. They are going to have to work really hard, just like I have.”

And what if the governing bodies limited that? What if there were limits on swing speed? Or practice? Or training? “That’s when I would say it would be too far,” he said.

But if it’s just equipment, DeChambeau said he will always have the “greater advantage.” Why? He used the 459-yard, par-4 12th at Royal Greens Golf and Country Club as an example.

“I think whenever you’re trying to shorten the equipment or whatever, the person that can swing it the fastest will always have an advantage,” he said. “I mean, even on golf courses that are short, I can hit, for example — a great example, actually, No. 12 out here. I can hit 3-wood up there, but it tightens up quite a bit. But I can leave it short of the bunker and have 155 yards into the flag, which is a 47-degree for me, less than a 47-degree for me, which is a 6-iron off the tee. So I’m literally hitting 6-iron off the tee compared to somebody’s hybrid or sometimes 3-wood or whatever.”