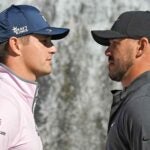 Brooks and Bryson's Match provided much fanfare, but it lacked a little sizzle.

After many weeks of fanfare (and many more months of trash-talking), Bryson DeChambeau and Brooks Koepka have finally completed their battle at The Match. The final product — a 12-hole, winner-take-all match at the Wynn Golf Club in Vegas — lasted a little over two hours, featuring live microphones, interviews and blow-by-blow coverage. Below, find out everything you missed from the action this afternoon, including the winner and a few highlights.

Who won The Match?

The Match of the Year turned out to be very much not the match of the year. Koepka was 4 up with 4 to play and DeChambeau conceded on the 9th green after he missed his long birdie putt.

In fact, after weeks of preamble, perhaps the most interesting moment of DeChambeau and Koepka’s gameday came hours before the golfers entered Wynn Golf Club in Vegas, when Bryson shared a shirtless photo sporting a set of washboard abs. The event that followed proved heavy on sizzle but decidedly light on any sort of competitiveness.

With broadcasters Phil Mickelson, Charles Barkley and Brian Anderson in his ear, DeChambeau struggled out of the gate and never quite recovered — losing four of his first eight holes without ever mounting much of a defense. Koepka rolled, taking advantage of DeChambeau’s lackluster approach play en route to a breezy victory. With a win within his grasp on hole No. 8, Koepka let off the gas, allowing a generous gimme “in the name of charity.” A hole later, DeChambeau conceded.

The entertainment product was quiet along with the golf, as Anderson, Mickelson and Barkley were forced to carry the weight for the surprisingly silent (yet still mic’d up) competitors. The television product, which once again debuted a whole host of interesting bells and whistles, fell short of the zing provided by previous iterations (though no doubt was helped by the abbreviated length).

Still, there were a few laughs: at one point, Phil, Barkley and Anderson needled Bryson about his interest in brain waves, a study that Phil called “the next frontier” for professional golfers. At another, Koepka shared the story of his caddie, Ricky Elliott, leaving the U.S. Open trophy outside his hotel room in Vegas during the post-win celebration.

Ultimately, for its shortcomings, the Match is difficult to criticize. In totality, the two golfers provided a few hours of entertainment, raised a boatload of money for charity and tossed a few laughs in to boot. Not bad for a Friday in November.