While You Were Sleeping: What You Missed at the Presidents Cup 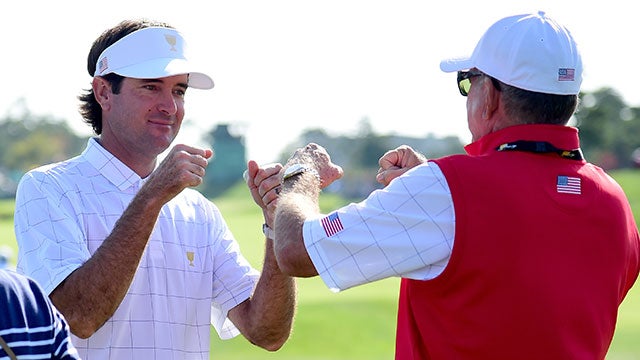 Team USA had no trouble getting out to an early lead at the Presidents Cup.

After day 1, the Americans have a 4-1 lead over the Internationals. Unless you’re a hardcore fan, you might have missed some of the opening round highlights. We’ve got you covered.

Phil Mickelson electrified the crowd in South Korea with a hole-out for birdie on the 13th hole of a tight match. He followed his traditional double-arm-raise with a new style of celebration with his partner, Zach Johnson.

We may not be used to seeing Phil and Zach as a team, but their celebration game is on-point. #PresidentsCup pic.twitter.com/eNcncLeUaN

If there’s a qualm about Spieth’s game, it’s that he’s not super-long off the tee like Rory McIlroy or Jason Day. In the Presidents Cup, Spieth is paired with bomber Dustin Johnson, and he’s loving it. The duo dominated Danny Lee and Marc Leishman on Thursday and will go off first in the Friday session against Louis Oosthuizen and Branden Grace.

Bubba Watson kicked off the event with an epic club twirl

Bubba really does love the first tee shot at these type of events.

The Internationals are down, but they aren’t going away

Nick Price went all-in on the Friday sessions, reconfiguring several of his teams on the fly. One big move was putting Jason Day and Adam Scott, his two highest-profile studs together in the third match against Zach Johnson and Phil Mickelson.

Not the start we hoped for but plenty of golf left. Looking forward to clawing things back tomorrow @PresidentsCup #TeamIntl