Which superstar breaks away from the pack on Saturday at the U.S. Open? 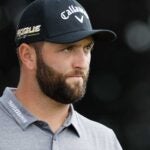 Jon Rahm shot a three-under 67 and is one off the lead at Brookline.

Collin Morikawa and Joel Dahmen share the U.S. Open lead after 36 holes, but a handful of superstars are lurking. Jon Rahm and Rory McIlroy are one off the lead, Scottie Scheffler is two back and rising star Sam Burns in three back. Which superstar in contention do you expect to break away from the pack on Saturday?

Jessica Marksbury, senior editor: Rory really impressed me today. He could have let that nightmare fescue situation bury him, but instead, he dug deep, drained a clutch 25-footer to save double, and ended the day only one shot off the lead. That kind of resiliency is a prerequisite for U.S. Open success. Major-championship Saturdays haven’t been great for him in recent years, and Saturday will be a huge test. I think this time, though, he’ll deliver.

Josh Sens, senior writer: Agreed, Jessica. Rory has that look in his eye and that bounce in his step. But I do think Rahm and Scheffler will both keep pace. I don’t see anyone breaking away from the pack. This one is going to the wire.

Josh Berhow, managing editor: Let’s go with Scottie Scheffler, who played his last six holes Friday in four under and gets the added benefit of not teeing off in the last couple of pairings on Saturday (he’s 44 minutes ahead of the leaders). Sure, he’s World No. 1, so he’ll have eyes on him, but I like his ability to go out and post a really good number on Saturday. He’s got grit, and we type a lot that U.S. Opens call for lots of it.

Dylan Dethier, senior writer: I’ll give you a superstar who’s going to chase down the pack instead: Xander Schauffele! He was all but left for dead after two bogeys in his first three holes on Friday. He fought back with a second-nine 32. When the going gets tough on Saturday afternoon, Schauffele will out-survive the rest and get into the second-to-last pairing for Sunday.

James Colgan, assistant editor: Jon Rahm! Finally, we’re seeing shades of the elite ball-striker who dominated the world at last year’s U.S. Open. He’s one stroke off the lead, and of all the players flirting near the top, the player I’d least want to see if I were Collin Morikawa or Joel Dahmen.