Where Are They Now? Martha Burk

Martha Burk is one of the most influential figures in Augusta National Golf Club’s 21st-century history.

How’s that sentence for delicious irony?

Thirteen years after Burk, then the head of the National Council of Women’s Organizations, cast a spotlight on Augusta National and its membership policies, the club’s image still hasn’t fully recovered.

You can thank Burk, in part, for several upgrades—including a televised Par 3 Contest, a state-of the art hospitality club called Berckman’s Place, and the warm-and-fuzzy Drive, Chip and Putt Contest that is open to young boys and girls—because ever since the club got its green coattails kicked in the court of public opinion for its Neanderthal stance on women, it needed to repair its bruised image. Cute kids on TV? You can’t go wrong with that.

The club’s reputation was permanently dented in 2002 after Burk (writing on behalf of the NCWO) sent a nine-sentence letter to Augusta National chairman William (Hootie) Johnson in which she challenged the club’s gender-restricted membership policies.t was a private letter that turned into a public battleground when Johnson, in an ill-advised move, went ballistic with words that still resonate with male bravado: “We do not intend to become a trophy in their display case. There may well come a day when women will be invited to join our membership but that timetable will be ours, and not at the point of a bayonet.”

Johnson’s bombast was a public-relations debacle. You know the rest. It led to a national debate and Burk’s famously fizzled protest demonstration during Masters week. That day, by the way, cost the city of Augusta a $120,000 settlement after a Circuit Court of Appeals later agreed that Burk’s rights had been violated when her group was forced to protest in an off-campus muddy field instead of outside the gates of Augusta National.

That decision was just another example of how the club was never going to win what amounted to debate on political correctness. The longer Augusta waited, the worse it looked, even after Billy Payne took over as chairman and annually tried to deflect questions about the issue. All those non-answers, even delivered with Payne’s well-practiced Southern charm, made the club seem even more chauvinistic and behind the times.

Finally, in 2012 the club announced that Condoleeza Rice, a former Secretary of State, and Darla Moore, a South Carolina financier, as its first two female members.

In 2013, Burk wrote in The Huffington Post, “Condoleezza Rice looks like she’s having a great time—and more power to her. Someone emailed me to ask if I didn’t think she maybe owes me a beer. Sure she does—me and a lot of others standing in that muddy field a decade ago. If we hadn’t been there then, women wouldn’t have the right to network with their big–business peers and play those manicured greens now.”

Burk left the NCWO in 2005 but has remained an activist for women’s rights and is busier than ever. She is the money editor for Ms. Magazine; a syndicated newspaper columnist; a frequent contributor for The Huffington Post; host of a national public radio show, Equal Time with Martha Burk; and recently wrote a book, “Your Voice, Your Vote: The Savvy Women’s Guide to Power, Politics and the Change We Need.” In 2010, as a senior advisor to New Mexico Gov. Bill Richardson, she drew up the first state-level gender pay–equity initiative.

It was her dustup with Augusta National, though, that made Burk a name to remember in sports, especially for golf fans. “People remember and often bring up the Masters,” she said from New Mexico, where she lives with her husband, Ralph Estes, a retired professor. “I get calls about sexism in sports, like why FIFA can’t put more women on its board. But sports has never been at the top of my list, except for keeping Title IX, which Republicans would love to repeal.

“I definitely lit the fuse in changing Augusta National. They would be closed to women right now if we hadn’t done what we did. Most people don’t know that after the brouhaha, my organization facilitated two lawsuits against companies whose CEOs are members [Smith Barney, a division of Citigroup, and Morgan Stanley] and we collected $79 million in settlements for the women at those companies, plus a provision that they could not entertain at venues that discriminate against women. I think that was the real tipping point, because other companies involved knew we could bring similar actions and they might have to quit the club.”

Burk hasn’t lost her fastball. Here’s part of what she wrote this year for Huffington Post before the Masters: 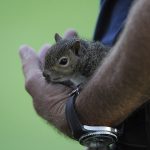 You may also like Where Are They Now? Sammy The Squirrel

“The Green Dinos at Augusta National Golf Club will wine, dine and brag about how their club is so exclusive the membership roster is secret. Well, mostly secret. If someone shows up at the tourney sporting a new green jacket, that means they’ve been allowed into the hoariest of old boy’s clubs… Augusta finally opened the gates a crack in 2012 and let two women squeeze through. It was hardly a breakthrough. The club famously snubbed Virginia Rometty, the new CEO of main tournament sponsor IBM, even though the male CEOs before her at Big Blue had been promptly welcomed into the fold…

“Last November, the boys relented and let Rometty in… In 25 years, will there still be only three token women?”

Well, Burk’s Augusta National membership invitation probably won’t arrive in the mail anytime soon. Don’t make the mistake of thinking that Burk sounds like she’s running for political office. At 73, she believes she can “agitate for change” more effectively as an outsider than by trying to fight with conservative majorities inside government.