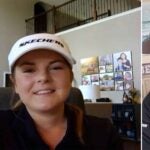 Laurel Batchelder, 14, won the chance to have a virtual sit-down with LPGA superstar Brooke Henderson.

What would it be like to spend an hour with your favorite sports idol? Just ask 14-year-old Lauren Batchelder, who won an opportunity to receive a virtual lesson from LPGA superstar Brooke Henderson.

Batchelder was the grand-prize winner of the Skechers & PGA Tour Superstore “Meet Our Elite” contest, which was open to teenage golfers between 13 and 18 years old who submitted a one- to two-minute video or 500-1,000-word essay that explains why they want to play like an elite golfer, and how they maintain that mindset off the course in daily life.

Batchelder’s entry detailed her commitment to strong academics in addition to golf. “Golf by no means is a fair game and learning from the best of the best, I think it could help me achieve my dream of being out there and competing with people I’ve watched growing up,” she said. Batchelder also explained that her high school golf tryouts are in the fall, and receiving guidance from Henderson would be a huge boost in confidence. “When I’m at tryouts and I step up to the 1st tee, I want the coach to think, ‘Wow, she is so confident, I need that kind of confidence on my team,” she said.

As the contest’s grand-prize winner, Batchelder was awarded $2,500 to be used toward school and/or training, as well as six months’ worth of Skechers footwear. But the best part was an hour-long virtual meeting with Henderson in July.

Henderson, whose 10 LPGA Tour wins include a major, the 2016 KPMG Women’s PGA Championship, kicked off her session with Batchelder by demonstrating her extensive warmup routine, which includes leg swings, toe touches, side lunges, hamstring pulls and upper and lower body rotations. Batchelder was able to follow along and mimic Henderson’s moves from her outdoor practice area. Henderson also had an opportunity to watch Batchelder swing, and offer guidance on fundamentals like alignment, posture, grip, balance and tempo, as well as a deep-dive on putting technique.

After the lesson, Batchelder had the chance to ask Henderson some questions of her own. Henderson was friendly and accommodating throughout, clearly enjoying the mentorship opportunity.

“It’s really important to me to help grow the game,” Henderson said after the session. “Morgan Pressel was a huge role model for me. I got to meet her when I was young and watch her do a clinic and it really had a big impact on me. It was an amazing experience learning from the best. I think it’s really shaped who I am today, so if I can return that favor to junior golfers that means a lot to me.”

For Batchelder, having the chance to learn from one of the world’s best was overwhelming in the best way. Was there one thing that really stuck out to her from her time with Henderson?

“Just everything, honestly,” she said with a smile.