It was a wet, wild Saturday at the Wells Fargo Championship, and the leaderboard is crazy tight headed to Sunday. Here’s what you missed.

That would be three players: Max Homa, Joel Dahmen and Jason Dufner. They took different routes to get there, but Homa and Dahmen shot rounds of 1-under 70 while Dufner fired even-par 71 to knot atop the leaderboard at 11 under.

Pat Perez is just one shot back at 10 under and will play in the penultimate pairing after a third-round 5-under 66. Rory McIlroy played a steady round and made two late birdies to post 68; he’s just two shots back at 9 under. Justin Rose is alone at 8 under, while a handful of big names — Paul Casey at 7 under, Sergio Garcia, Rickie Fowler and Patrick Reed at 6 under — lurk within striking distance. 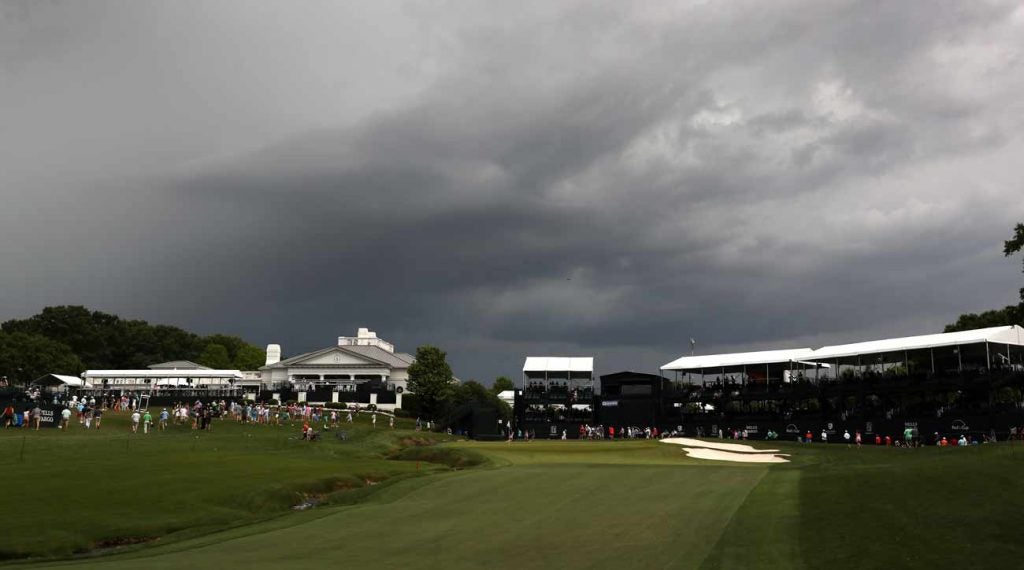 It was a threatening afternoon at the Wells Fargo Championship.
Getty Images

What you missed Saturday included two rain delays that interrupted play for much of the afternoon. The first delay came at 3:37 p.m. ET, and lasted for 71 minutes before resuming at 4:48. But players only snuck in 30 minutes of play before threatening weather suspended play a second time. Play was suspended at 5:18 p.m. and lasted for 66 minutes. Play resumed at 6:24 p.m.

According to PGA Tour Communications, this is the fifth consecutive PGA Tour event that has experienced a weather delay.

NONCHALANT EAGLE OF THE DAY

That would belong to Joel Dahmen, who figured that something was wrong with his putt at No. 7, but we’re not exactly sure what, because it looked very much like a perfect marriage of line and pace. Walk it in, Joel!

That would be the birthday boy, Rory McIlroy, whose ball ended up directly on top of a divot at No. 12. No problem; the now-30-year-old McIlroy nearly holed the thing…but then three-putted for bogey. That’s a bad news-good news-bad news rollercoaster of events.

News
Cancer survivor Joel Dahmen: ‘I’ve been through life and death—this isn’t it’

REACTION OF THE DAY

Okay, so we’re going back to Dahmen for this one. Waiting for McIlroy to finish up his rain delay interview with CBS’ Amanda Balionis, Dahmen heard a massive thunderclap — and did this:

Play has been suspended again @WellsFargoGolf.@Joel_Dahmen is taking applications for a thunder buddy. ⛈ pic.twitter.com/lXo9Fpam0p

It’s shaping up to be a banner Sunday in Charlotte. Here are the final-round tee times.