Cancer survivor Joel Dahmen: ‘I’ve been through life and death—this isn’t it’

Last year, as Joel Dahmen looked back on his PGA Tour season, he laid out an alternate path for himself — one he thinks he would have taken were it not for a cancer diagnosis.

“If I didn’t have cancer, I’d be a washed-up driving range pro telling people how good I used to be,” he told the AP at TPC Boston. “I would be in my little town as an assistant pro. Everyone would love me. I’d do well in (PGA) section stuff and I’d drink too much. I’d be a woulda-coulda-shoulda guy. I’d be telling people for 50 years how good I was.”

Dahmen has hung onto that perspective. On Friday, as he surged near the lead at the Wells Fargo Championship, he was asked about pressure, and how he deals with it.

“I’ve been through life and death,” he said. “This is not it. I mean, sometimes I probably act like it out there and have to remind myself, but I’ve been through so much more. I mean, I’m a kid from Clarkson, Washington, who’s on the PGA Tour. That just doesn’t happen.” 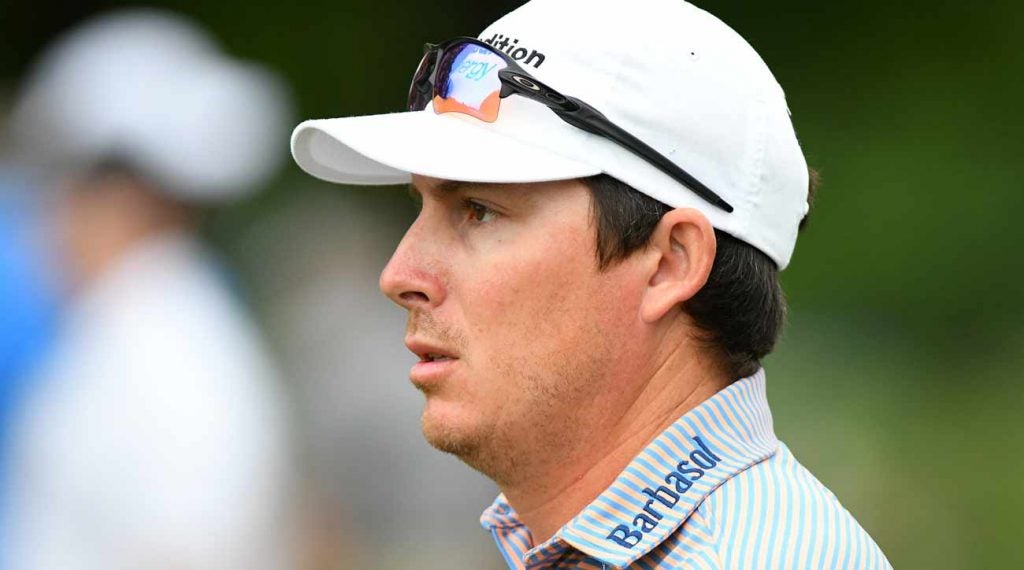 Joel Dahmen is a fun-loving straight shooter and one of the PGA Tour's great characters.
Getty Images

Dahmen grew up in a small town in remote eastern Washington, just miles from the Idaho border. He was a talented young golfer, but tragedy struck once he hit high school. His junior year, his mother died of pancreatic cancer. Shortly thereafter, his brother was diagnosed with testicular cancer.

In 2011, Dahmen got a diagnosis of his own: he had testicular cancer, too. He underwent surgery and chemotherapy. He overcame the cancer, and gained perspective — though that hardly meant golf got easy. Dahmen lasted just a year at the University of Washington before dropping out and grinding out a pro career on PGA Tour Canada. He wasn’t sure if he would ever progress further.

“There’s always doubts,” he said Friday, looking back. “I had a tough, I guess it was the winter of ’13-’14 before I played well that summer. I missed Q-School again at second stage, was pretty bummed out. Didn’t play golf for about a month and a half, bought a dog and then that whole story. My now-wife gave me $200 to go get a lesson and it kind of kick-started my ’14 and now the rest of my career.”

Tournaments
‘They’re way better than I am’: Joel Dahmen’s insightful answer to what separates top-10 players

The rest of his career has looked particularly promising of late. Dahmen has surged up to No. 125 in the world. He qualified for the FedEx Cup playoffs last year. He checked off a bucket list item when he played with Tiger Woods. He became one of the PGA Tour’s more notable personalities, for his look (he frequently sports a bucket hat, and occasionally a full mustache), his sense of humor (like when he made his caddie take the “One Chip Challenge” at TPC Sawgrass) and his straight shooting (evidenced by a cheating accusation he levied at Sung Kang last summer).

More recently, he has added to his career earnings; he made his Players Championship debut — and finished 12th. And he soaked it all in as he went, learning plenty in the process.

“You can only be so nervous, right? It can only get so nerve-wracking, and your hands can only shake so much. Like, 17 tee at the Players, when I don’t know how much money was on the line, but it’s a lot. If you can finish par-par on those two holes under the gun, when it doubles my net worth, that’s some pressure. It doesn’t get much more than that.”

Dahmen will be nervous heading to Saturday’s third round at the Wells Fargo Championship — but he’ll be ready to handle those nerves.

“I love this game, it gives me a great career, a great life. I don’t really care about trophies, to be honest,” he said — though he added an important qualifier, a reminder that he’ll be gunning for the top. “I love competing, but I love money, too.”