Wayne Gretzky Q&A: On Jordan Spieth, Augusta National, And Why He Loves Golf 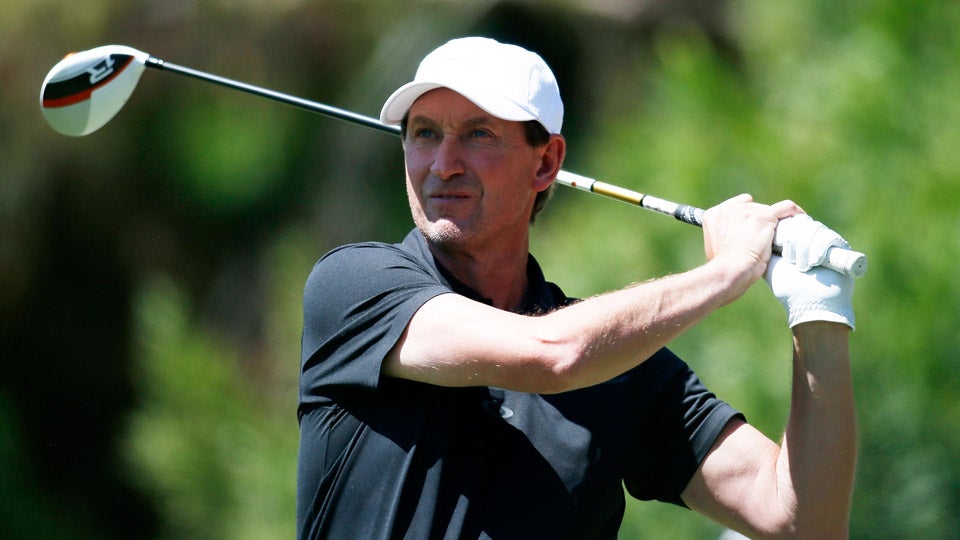 After living the life of a superstar on skates, Wayne Gretzky takes a different approach to golf than he did on the ice. The Hall of Fame hockey player leaves his competitive streak behind and uses golf as an opportunity to relax and spend quality time with his family. Gretzky sat down with GOLF.com to discuss how golf differs from other sports, his favorite golf course and a stand-out memory from his rounds with Jordan Spieth.

Do you remember when you first picked up a golf club?

Oh gosh, probably when I was 14 back in my hometown [Brantford, Ontario]. My friends and buddies all played. It was more my dad me telling me that I should learn how to play golf because all hockey players play golf. That’s kind of how I started. Like every other Canadian kid, I thought the clubs were on the wrong side. My dad told me if you want to be a good golfer, you have to play right-handed though. So that was my introduction to the game.

Growing up in chilly Canada, what was the appetite for golf among you and your buddies?

It was there. Obviously not to the degree that it is in the United States or Florida, but it was there. In Canada, hockey is religion. Everything fell under the radar compared to the game of ice hockey. But that has changed over the last 20-25 years, especially with the success of Mike Weir. He’s been the guy who changed the landscape. Kids at the age of 10 or 11 wanting to become a pro golfer and win a green jacket. He single-handedly has done for Canadian golf what Tiger Woods did for golf worldwide. That’s pretty good company. He has really changed the culture of kids in Canada, not only do they want to play hockey, but a lot of kids want to play golf too. That’s been a huge impact for golf in his country.

Did golf come easy to you?

Uh, no. [Laughs] Even today, when I play people say, “Oh you must be a good player. Hockey players are good golfers.” [Laughs] That’s not necessarily true. That doesn’t always translate. The biggest thing, in any sport whether it be golf, ice hockey, tennis, baseball, whatever, you have to learn the fundamentals of the game. I never learned the fundamentals of the game. I basically just got out there and played with two or three buddies every day and tried to get a better score than the day before. That was just how I played. Even today Dustin [Johnson, who is enegaged to Gretzy’s daughter, Paulina] will say, “Let’s go up to the range,” but I know what I am as a golfer. I love the sport, and I think it’s a great family sport. We’re lucky enough to live at a great golf course in Sherwood Country Club in L.A., and we get to play a lot of golf, but that’s it. I play. I’m not trying to become a 2-handicap. I know my flaws and what I can and can’t do. When I go to a golf course, I want to go play. I don’t want to stand on a range and get lessons for two hours. All my friends know that’s how I attack it. I enjoy the company and the friendships we have out there. What’s a better place to be than on the golf course with your family?

Does the ability to go out and enjoy a round with your family differentiate golf from other sports?

It’s a huge difference. It’s a family sport, yet it’s a competitive game. I have a 15-year-old who plays high school golf, and he does it properly. He takes lessons and has learned the fundamentals of the game. He plays in AJGA tournaments around L.A., and a couple of his friends have gotten scholarships. So we see both sides of it. You can have fun and enjoy it, but you can also be competitive and further your career toward college or beyond. We’re lucky enough, we’re around all of it. I have a ball when I play in member-guests. It’s enjoyable to try and compete with friends. From that point, I love the competitive side, but I’m not good enough to play in some celebrity events. I’m not at the level some of those guys are. Some of those guys are really great golfers.

For athletes to become superstars, they’re often driven by a dogged competitiveness, and with all-time greats such as Michael Jordan, it’s not something they can turn on and off. But you said you’re able to turn it off when you step on the first tee.

I think that surprises people who play with me. But when I go out there I want to be the best I can be and play as well as I can and when I make my best score I’m proud of the day I had, but it’s not going to change my life or my lifestyle. Same as if I have the worst day on the golf course. People who play with me or see me are a little surprised that I’m not overly competitive. And the friends that I play a lot of golf with, they know how I am. I’m out there to enjoy myself. I’ve done all of the competitive part of being a professional athlete, so I’ll enjoy myself. I don’t need to stress myself over an 8-footer for birdie or bogey. It’s not going to change my life.

You partnered with Dustin Johnson at the 2015 Pebble Beach Pro-Am and played alongside Jordan Spieth for the first three rounds. What stands out from your up-close look at Spieth?

I’m not a golf scout, so I can’t tell you the difference between a 2 or a 3 handicap, but I do know the difference between the top-10 guys in the world. And it’s the maturity level. He’s been in the front row of the limelight for a while, but I found his maturity to be special. What you see is what you get. There’s no phoniness. He’s genuinely a kind-hearted young man who’s happens to be extremely talented and loves to play golf. He deserved all the accolades he’s getting. When you’re in pro sports, it’s nice to hang your hat on a premier player who is a premier person. Golf is fortunate, because he’s definitely that. A lot like Roger Federer is in tennis. I can’t say enough good things about him. That’s what I remember most. They all hit great shots and they all make long putts and get up and down from bunkers — that’s why they’re on the Tour — but I enjoyed his company immensely. His partner, [country music artist] Jake Owen, Dustin and I had a wonderful three days. It was a little intimidating when you’re the worst golfer of the four. In 2014, Kid Rock was in our group, and I’m a little better than Kid Rock [laughs], so it was more intimidating this year.

What’s your favorite golf course in the world?

I don’t think there’s anything comparable to Augusta. I’ve been lucky to play St. Andrews, Pebble and Augusta. If you get to play those three courses, you have to feel fortunate. I played with my 15-year-old at Augusta for a couple of days. That was a tremendous thrill. We live at Sherwood Country Club [in Thousands Oaks, Calif.], and I can get in my golf cart and drive over around 9 a.m. and be home by 12:15 p.m. When we go down to visit Dustin and Paulina, we are lucky to play the Bear’s Club [in Jupiter, Fla.], which is a special place. I’ve been lucky in my life. I’m glad my dad handed me a golf club when I was 14 so that I don’t embarrass myself when I do get to play these nice courses.

Any particularly memorable moments at Augusta?

You know what, I birdied No. 1 on the first day. My son is a pretty good player, and he left his birdie putt about an inch short. I was teasing him that his old man made a birdie putt at Augusta before he did!