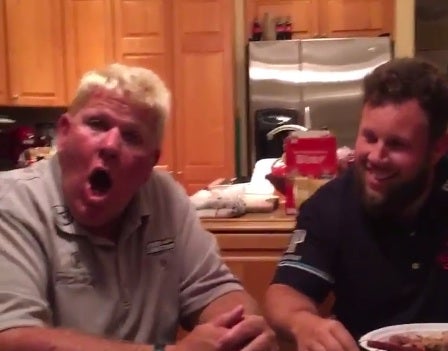 Welcome to the first episode of the 'Meat and Beef Show.
Via Twitter

John Daly and Andrew ‘Beef’ Johnston cemented their friendship with a 30-minute Q&A on Periscope, in which they tackled fan questions on their golf games, their breakfast preferences and their taste in movies.

Daly took questions with a cigarette in one hand and a glass of chocolate milk and whisky in the other. They discussed Daly’s pancake-making abilities, his love for Apple Jacks, and which state is home to the best mullets. Daly offered to make Beef a pair of Loudmouth pants printed with Arby’s sandwiches. “Nobody can beat me hungover, or drunk,” Daly says at one point. “I wouldn’t even attempt it,” Beef replies.

Daly also taught the British Beef how to say Arby’s the American way: