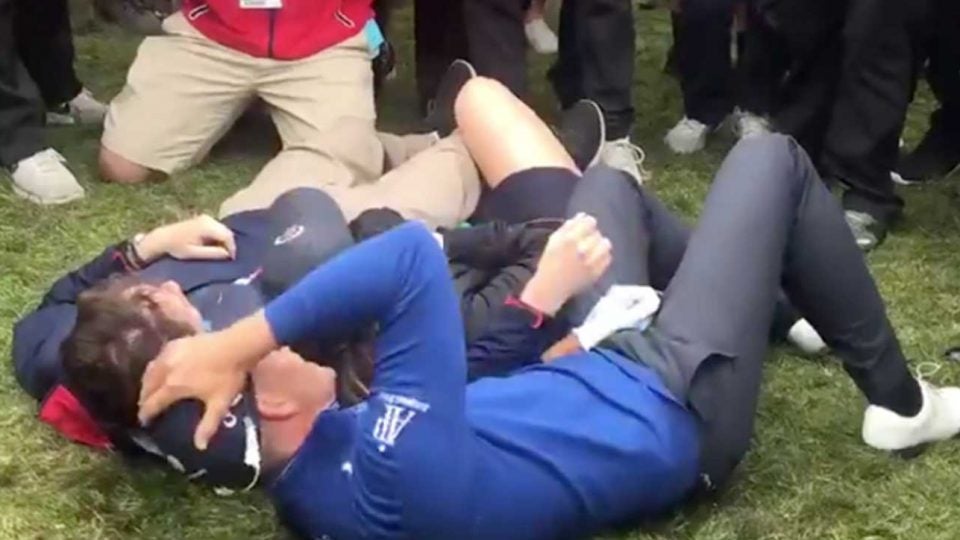 Henrik Stenson takes a photo with a fan at Pebble Beach.
@EvinPriest

Henrik Stenson is known as a bit of a comedian on Tour, but he found himself in a pretty serious situation during the third round of the U.S. Open at Pebble Beach after hitting a fan with a wayward shot on the 16th hole.

Stenson’s tee shot missed the fairway, landing in the second cut. With the ball sitting up, Stenson pulled an 8-iron and attempted his approach shot. As soon as he hit it, the Swede knew it was heading straight for the fans standing behind the green.

“It was a semi-shank, it wasn’t a full one,” Stenson said. “But it was a nice flight out to the right, shot it forward, but they can’t see anything, I can’t see where it’s going either, and clipped the guy right in the forehead.”

That’s right. Stenson’s semi-shank struck a fan. As he approached the crowd, Stenson saw the young man (his victim?) lying on the ground with a knot on his head about the size of half a golf ball.

“I said ‘I’m sorry.’ What else can you say?” Stenson said afterward. But it wasn’t an apology the fan wanted — instead, the fan asked for a selfie.

Henrik Stenson nailed a guy in the crowd with his second shot on 16. Guy was on the ground, down for the count. Henrik laid down for a photo this bloke will never forget. Henrik Stenson – absolute character 👏 pic.twitter.com/1YIE6pJUW4

Being the good guy that he is, Stenson checked with USGA officials to ensure the fan was okay.

“I asked for his details so I can contact him at a later date and check up on him,” he said. “I might send him more than just one golf ball next time. I might send him a couple dozen or something to try to make up for my poor shot.”

Stenson ended up bogeying 16 and finishing with a 1-under 70. He’s tied for 9th at four under, seven shots behind leader Gary Woodland heading into Sunday’s final round of the U.S. Open.