Van Cynical Mailbag: What You Don’t Know About DeChambeau 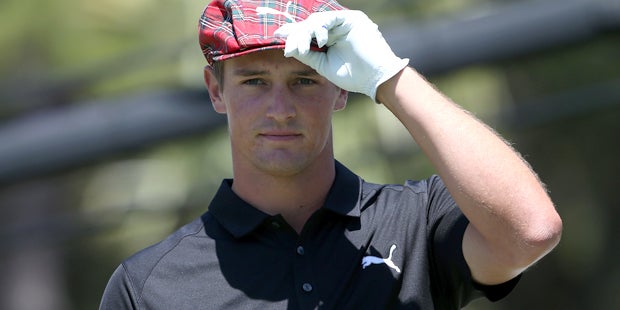 Are you feeling DeChambeau-verloaded? Not yet, apparently. If your mailbag questions are any indication, you’re still hungry for morsels about the game’s most interesting player (no offense, Miguel). Let’s do this:

Hey Van Cynical, what’s something interesting that we HAVEN’T yet been told about Sir Bryson of the DeChambeaus?—TG via Twitter

I’ve heard that Sir Bryson can’t wait to break out his sidesaddle (face-on) putting style once he secures his PGA Tour card but he’s not doing it now because he’s already getting enough flak for his unique all-irons-the-same-length equipment revolution. Also, if you’re going to join his legion of fans, you will be known as a DeCham-Bro. Well, maybe. It’s catchy, and it could stick. It beats Bryson’s Bisons. One other thing: He does not play quickly, what with all that time spent checking his scientific yardage book notes before every shot and putt.

VanShank, how do the rank-and-file pros feel about DeChambeau loading up on sponsors’ invites?—Kevin Montminy via Twitter

They might be a bit annoyed if he wasn’t a Walker Cupper and U.S. Amateur champion and, oh yeah, low amateur at the Masters, Hannah Montana. If you’re a sponsor, of course you’re giving him an invite, instead of some 37-year-old journeyman who’s still trying to make it. DeChambeau showed at Harbour Town that he’s already got a following. Plus, every sponsor is trying to do a favor for a potential future star, just in case that materializes, so maybe someday they’ll pay it back someday, like most stars not named Tiger did.

Sickmananoff, Queen Elizabeth’s birthday is coming up which begs the question: Who is the best golfer born in April?—Brian Bailey via Twitter

I’ll take Seve Ballesteros (April 9) against the obvious field — Henrik Stenson (5), Davis Love (13), Lee Westwood (24), John Daly (28). No doubt I missed some other notables, but this is a free site, so you get what you pay for. For a more thorough research report, I can be reached via PayPal.com.

Hey Vans, Danny Willett and Branden Grace were both in the top 15 in the world rankings. Yet somehow were labeled surprise winners. Why?—The Bogey Train via Twitter

Willett was a surprise because ex-Grand Slam chaser Jordan Spieth had a five-shot lead with nine holes to play in the Masters. Really, him losing didn’t surprise you, Training Wheels? And I didn’t read anyone calling Grace a surprise. He coulda-shoulda won the U.S. Open last summer at Chambers Bay. Maybe someone on TV said it, but with all that dead air to fill, stuff gets said that shouldn’t be said. Let’s just say that in a certain hypothetical Masters pool, I had Willett on my team. It was the rest of the lineup that sucked eggs. Um, hypothetically.

Hey Van Cynical, How bad is Arnie’s health? He looked frail at Augusta.—Andrew Polson via Twitter

Arnie’s mobility and balance have decreased and his hearing has declined, but he’s still smart and cogent and he’ll needle you, just like always. He’s 86, Polson Pen. He’s entitled to slow down.

Van Cynical, All the tents, stands, platforms — do those travel from tournament to tournament or are they stored at the host city until the following year?—Scott Cooper via Twitter

They’re stored at the host city, Alice. Those items take weeks to erect, no way they could travel from site to site in a timely fashion. As Churchill once said, “If you don’t control your own beer tent, ya got nothin’.”

You may know this, Alfred E., but Colonial is played in Fort Worth. It’s a big city, a major jigsaw piece that is the puzzle in Dallas, one of the nation’s largest metro areas. So I would reject the notion that Colonial is off the beaten path. Harbour Town is on an island — Hilton Head Island, in South Carolina — so it’s remote and actually off the beaten path. Gotta go with the Town on this one.