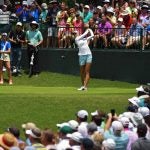 Both national championships will have at least some fans in attendance in 2021.

Let there be fans! (Some, at least.) The USGA announced Monday plans to welcome “a limited number” of attendees to both the U.S. Open and U.S. Women’s Open in 2021, along with rules for those hoping to attend.

The new regulations — which will require those in attendance to follow a series of stringent protocols in accordance with local guidelines — provide a pathway for galleries to return to the national championships for the first time in two years.

“Last year, we missed the energy that fans bring to our U.S. Open championships,” John Bodenhamer, the USGA’s senior managing director of Championships, said in a release. “We are grateful to our local and state health and safety officials in California to be in a position to welcome some fans back this year to witness the greatest players in the world contending for these prestigious championships, while working to maintain the health and safety of all involved.”

The Women’s Open, scheduled at the Olympic Club in San Francisco, Calif., from June 3-6, will be the first women’s major with fans since the AIG Women’s Open in 2019. It will be contested just two months after Patty Tavatanakit won the first major of the 2021 season at the ANA Inspiration in nearby Rancho Mirage.

On the men’s side, the 121st U.S. Open is scheduled for June 17-20 at Torrey Pines in San Diego. In January, the PGA Tour held the Farmers Insurance Open from Torrey with no fans in attendance — a tournament that ended in a five-stroke Patrick Reed victory.

In recent weeks, some doubted the governing body would be authorized to welcome any fans to the national championships. California’s state and local authorities have maintained some of the tightest Covid restrictions in the country and have not permitted fans at any golf event since the start of the outbreak. In November, Santa Clara County (which contains San Francisco) forced the local NFL franchise, the 49ers, to play its games from Arizona after placing a pause on contact sports.

The USGA will contact fans who have already purchased tickets directly, while those looking to buy tickets of their own to either tournament can learn more at usopen.com and uswomensopen.com.