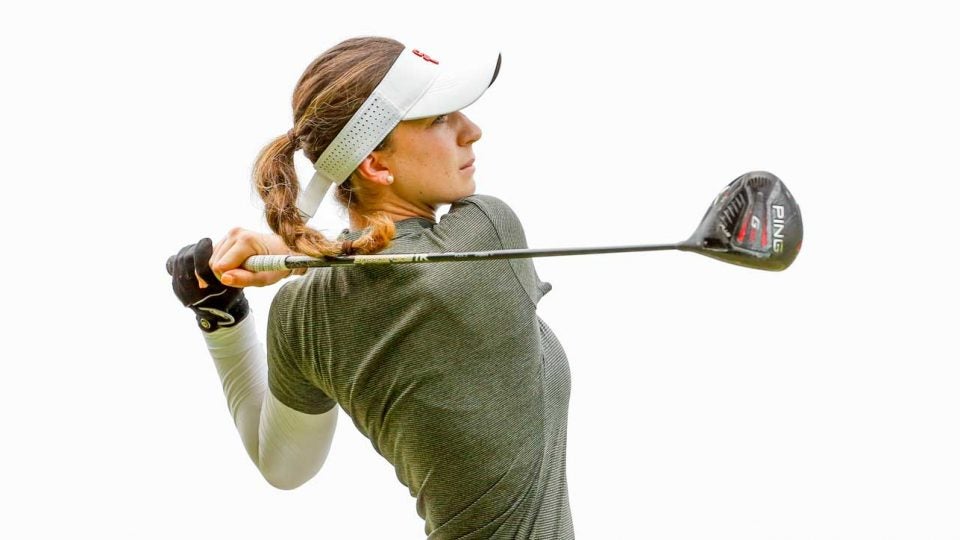 Gabriela Ruffels plays her tee shot at the 9th hole during the semifinal round at the 2019 U.S. Women’s Amateur.
Steven Gibbons/USGA

Valenzuela, who was born in New York City but grew up in Mexico and Switzerland and plays under the Swiss flag, faced 15-year-old New Jersey high school sophomore Megha Ganne, who has been on a remarkable run of survival. Ganne won three of her four previous matches on the 18th, 19th and 20th holes.

On Saturday, Valenzuela got off to a hot start, going 3 up after four holes. But Ganne fought back, tying the match with a birdie on No. 15. Valenzeula reclaimed the upper hand with a win on No. 17, but Ganne again made a clutch birdie on the difficult 18th to extend the match. A birdie on the 19th hole (No. 10) secured Valenzuela’s victory.

“I told myself, do not regret this. Do not let it slip off your hands,” Valenzuela said after her round. “You have control over it. And even when you start feeling a little nervous, I’m like, I want this. I wanted to go to the finals, and so that’s what you need to do to go to the finals is make birdie.”

Sunday will mark Valenzuela’s second appearance in a U.S. Women’s Amateur final. She lost to Sophia Schubert at San Diego Country Club in 2017, 6&5.

Features
How one 15-year-old girl went from a beginner to the U.S. Women’s Amateur in just three years

Valenzuela’s opponent in Sunday’s final will be a familiar foe: Gabriela Ruffels, a fellow PAC-12 player who is on the team at USC. Ruffels defeated Valenzuela’s Stanford teammate, Andrea Lee, 2-up on the 18th hole in Saturday’s semifinal.

This is Ruffels’ first U.S. Women’s Amateur, and her performance has been remarkable. Saturday marked the first time any of her matches had reached the 18th hole. Ruffels was born in Orlando, Fla. but grew up in Melbourne, Australia, and plays under the Australian flag. If she wins Sunday’s final, it would mark the first-ever win for an Australian player in the 119-year history of the championship.

“It would be great [to have that distinction],” Ruffels said after her round. “I’m not really going to think about that, just going to kind of focus on my game, keep doing what I’m doing, and if that’s the result at the end of the day, then I’ll be super happy. But even just making it to the final and getting that opportunity to kind of try and get the title is really great.”